Anybody using the Galaxy View 18.4 ? What are your opinions.I hear the screen display is not great.looking for opinions pros and cons of this tablet.Thanks

I have one and use it as a Roon remote. Works well as a centralized touchscreen/control point for lounge, kitchen etc.and screen is fine. Too bulky to serve as a lap remote. IPad Pro is as big as you can reasonably go for something you’re going to use in a listening chair.

Thanks for the reply.Also looking at the I Pad Pro.The I Pad Pro screen is Better for screen resolution and much higher pixel density but costs nearly twice as much.

I have both, the iPad is used only in my listening room as a dedicated Roon remote and internet browser, the galaxy for the general house as a centralized control point.

You get a lot more on the galaxy screen. The galaxy’s resolution is perfectly acceptable for use with Roon but it is of course not as fine as the iPad pro resolution.

Thanks.Going to take a look at one tomorrow.By doing research seems to be mixed reviews.

If I had to choose between the two I’d go with the iPad Pro. 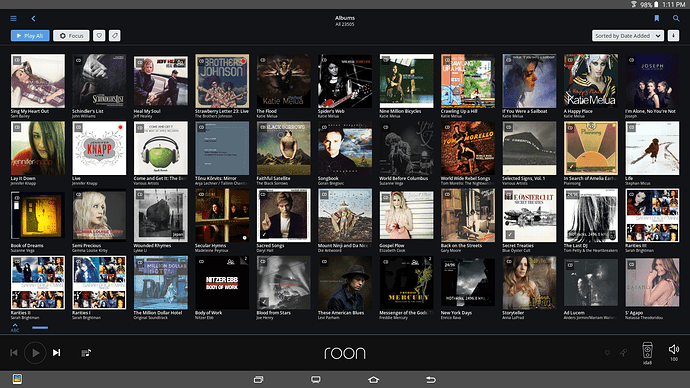 Thanks for showing me a screen picture.Went to store but they did not have a galaxy view for display.Have been told screen looks good from a distance but when holding screen closes say as Using as a tablet screen looks pixelated ? 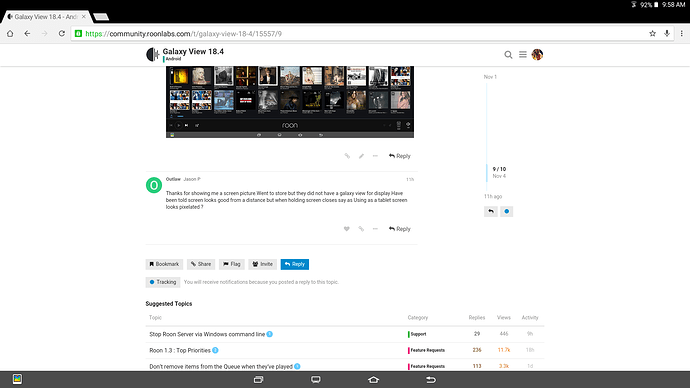 I just picked up a Galaxy View for $399. I think it works great with Roon. On my 12" Galaxy Tab, I could only get 21 albums. This allows for 44 albums as the picture above shows. With the price drop, I am thinking that there must be a new Galaxy View on the horizon at the Samsung event on the 28th. I was thinking that I would try it out and return it when (if) the new one is announced. Now I am thinking that I might just keep the original one since I am only using it for Roon.