When I switch from an App on my MacBook back to Roon, sometimes the text in Roon is missing … things like Song Titles, text about the Album or Artist … the Album title.

Sometimes rather than the text being missing … it is just “garbled” … like trying to run an App without having the right Font installed.

I went into my MacBook’s utilities and ran a repair on my Font book.

I have a MacBook with 2 graphics cards … it seems to happen mainly when the default “Integrated” Intel HD3000 graphics card is used.

Have found a work around … have “gfxCardstatus” installed, so I just switch to the “Discrete” AMD Radeon HD 6770M graphics card.

Then go back into Roon and text appears normal again.

rovinggecko … thank you for the link !!, it was helpful (at least to let me understand why my switching to the AMD graphics card seems to fix the issue).

In your thread, Danny mentioned …
“It seems like you may be running out of video memory…”

So my AMD graphics card has a lot more video memory … this must be why it fix’s my issue (though my MacBook runs a lot warmer on the AMD card, I much prefer to use my Intel graphics card).

the issue is getting worse … I am now experiencing missing fonts, garbled text, and sometimes no text at all … even when I switch to my AMD graphics card (previously it was always happening just on my Intel card).

How many Albums in your Library??

Ronnie I have 600 Albums, not a very large library.

I am having a few issues this weekend … though am really loving Roon for discovering new music.

Plus, I went into Settings “general” tab … and selected
“Allow for smaller covers and photos”
and my font issue has resolved itself (for the moment) though it has been intermittent all day.

Oh oh … this could be a case of “problem between chair and keyboard” … that is me!
I have changed the setting for “Memory for Photo’s/Artwork” back to 64MB (I had a higher setting selected). Will see how that goes.

I think your intuition is right here–garbled/missing graphics are usually a sign that you’re running low on graphics memory.

@brian 64MB for graphics memory seems to be stable so far for me … before I was trying 128MB (or higher) to check any effect/improvement of using higher.

[If] The next time I see this issue, I will just try selecting “Minimum” for graphics memory.

Happened again at 64MB (though much less frequently …went quite a while).

I will now just try selecting “Minimum” for graphics memory (which I think is the default anyway). Was just checking out the graphics and CPU options in Settings to see if there were any benefits to changing them.

Yesterday I switched to “Minimum” … yet when I started Roon today … it looked okay for about 5 minutes … I also checked the RAM setting for Graphics Memory … and for some reason this is now 256MB (I had set it to “Minimum” yesterday) so it seems to have changed on it’s own accord. 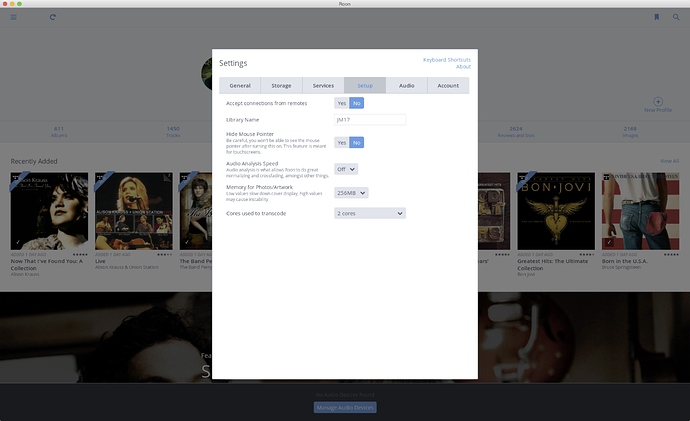 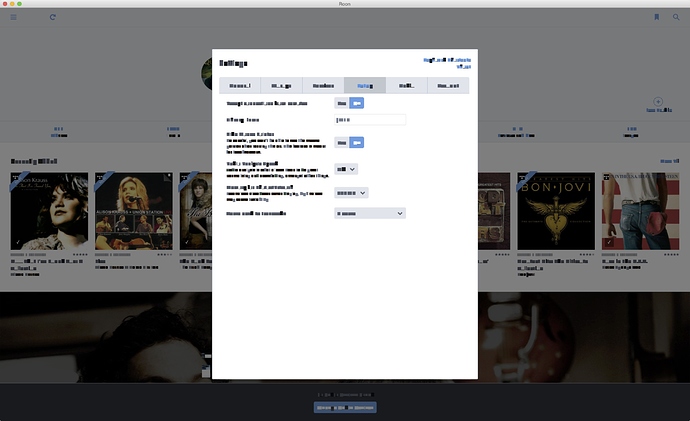 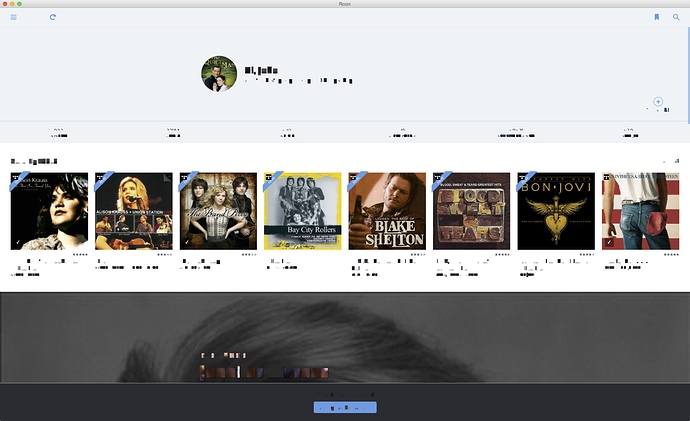 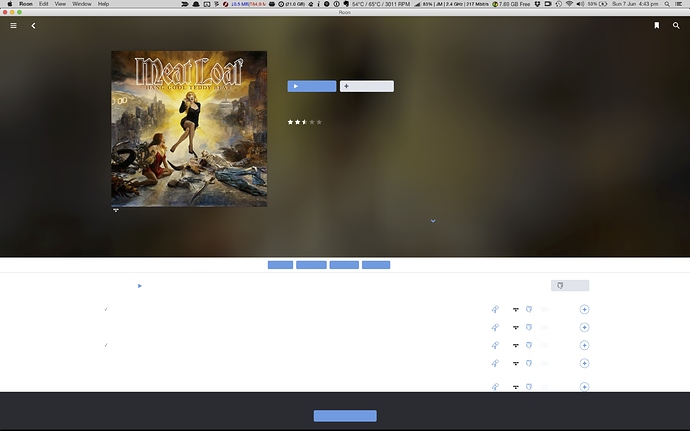 As an aside … though it does not help me right now …

… and should improve the rendering/graphics performance of Roon even further … I hope. I just remember reading the support threads and one of the Roon guys mentioning that sending out audio data is the easy part & it was the graphics rendering which was actually more intensive (not exactly word for word, a lot of paraphrasing going on here, that was just the jist of what I recall).

Apple today announced a boost to performance coming to users with OS X El Capitan in the form of Metal, previously available only for iOS. The...

Tonight Roon lasted for 3 hours before the garbled graphics & text occurred … I did a cold restart of my MacBook tonight to ensure that the graphic memory was cleared.

I also tried just keeping it on the “Tracks” view … instead of “Overview” to see if that caused any difference … I thought as “Tracks” view does not have any album art it may behave better.

I am really enjoying Roon , it is great !!! … just wish this issue would go away. 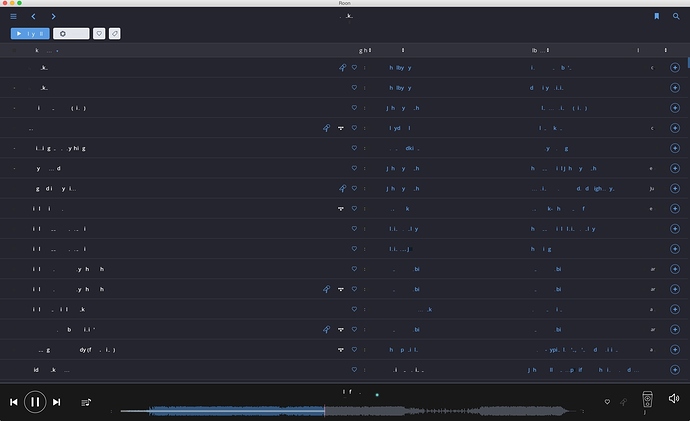 Not sure what happened … though I did start up the Tidal OS X app, and the next minute I clicked on Roon … and it had fixed itself graphically. So the next time it happens I will just start the Tidal OS X app and see if that is actually the real fix.

Tried starting Tidal OS X … it did not fix it like last time.

Anyway, just journaling my experience as it happens (I dont trust my memory to get all the exact details down otherwise).

I’m experiencing the same thing. Thought it was the “swiping” between two apps/screens that caused it.

How much RAM is in your MBP? Which OS X version?

Your screen dumps seem quite high res… Are you connected to an external display – and at what resolution?

Not good to hear that this is affecting you as well … though I was wondering if this was just me experiencing the issue.

Im my MacBook’s settings “Display” I have selected for “Resolution” the setting “Default for Display” which I believe is 1920 x 1200 for my native resolution of my MacBook.

I am not connected to any external displays.

Since you have two graphics cards, and the integrated one is quite old (Intel 3000 is from the Sandy Bridge era), you might want to see if you have better luck using the Radeon. The more recent integrated chips have gotten pretty good, but back when that one came out in 2011, there was still a huge gap between the Intel HD chips and the discrete adapters available at the time.

I use this tool to monitor and manually switch between graphics adapters on my mac: https://gfx.io/

If nothing else, it might help you determine if graphics issues are occurring with one adapter, the other, or both, and at best, it may give you a button that you can use to force one or the other when you run into trouble.

That’s the Late 2011 model. Beautiful machine, I’ve had one for years, should be able to run Roon very well.

Since Roon is more taxing to your graphics than most other software and given the symptoms you describe, I’m a little worried about this:

You may want to have yours checked out if your problems persist.