Gary Numan From the Future!

Gary Numan has just released I Assassin in HD. It shows up in a Qobuz search but when trying to play tracks from it, I get the “Album in not yet available” message. Looking at the release date, it shows it being released on March 1, 2019.

Is this a country thing, a meta-data issue, or a filter issue? 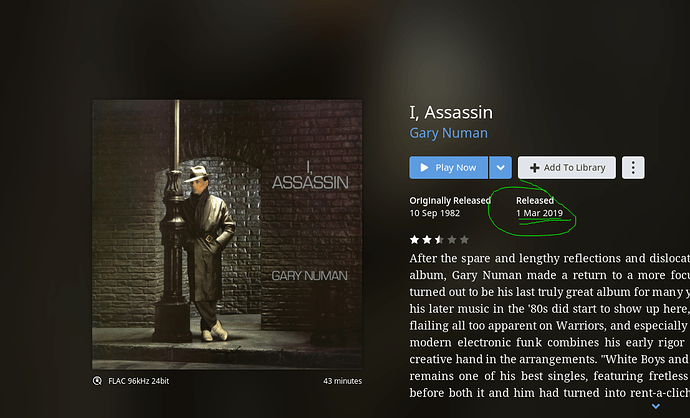 We are the catalogue and archive department for past and present Beggars Group labels & artists. We care passionately about sound quality, quality re-issues, artwork and when we can manage it….very fancy packaging.

It’s the UK trlrase date that triggers in Qobuz, its like pre-purchase on amazon

It’s a new remaster due in March that also comes in a lovely green vinyl cut too. IIRC Roon and Qobuz were working on how to not show albums not released yet.

Yeah I have had this with some Qobuz albums in Roon that are advertised before release. I think they should be filtered out or at least have a different section or category that they remain in until release

It’s a new remaster due in March

Weird. I bought it on Friday as a HD download.

That is odd. How does it sound ? I love the Telekon, Dance, Assassin period.

Originally released in 1982,‘I, Assassin’ is Gary Numan’s sixth studio album and fourth under his own name.

Restored from the original analogue tapes , presented on HD audio and pressed on dark green vinyl , this album is now available to pre-order on Gary’s official online store.

I love his albums up through Assassin. The late 80s Warrior period was a bit grating, although, there are some gems. I always thought he was trying to hard to be Prince, LOL.

But, I think it has to do with location. I purchased it from HDTracks US.

I’ll just have to wait a couple of weeks.

For me 78-82 and Pure onwards. Bar the odd track in between I leave the middle years alone completely.

100 Percent agree. I saw the Pure tour and it was awesome.