Sorry of this has been suggested before, but would be nice to have the option to generate genres on a track by track basis from user data only.

Goto album view, long press an album till its selected, select all albums using the menu then select edit. In metadata preferences set Roon to use only your genre metadata

Sorry to be dense on this Evan but I’m not seeing a setting for genres. There’s the browser genre preferences under settings. But here, I don’t see it for albums. 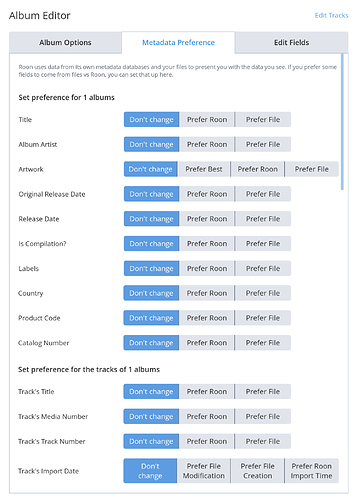 My request would be for a global switch that turns on user tags to generate genres on a track by track basis. For classical, doing genres on an album basis renders it useless for many recordings which might have a selection by a baroque composer and selection of a minimalist folk piece.

Apologies it’s under settings general - turn off Roon genres and turn on your genres.

Yes, I’ve tried this. The issue, I think, is when you play a specific genre, say, Baroque, the playback is of albums that contain a track identified as baroque… but it could be any track off that album. So when I play the Baroque genre, it might serve up a 20th century classical track, because it’s on an album that also has a Baroque track.

I realize this might be a low priority and that’s okay. I’m happy to build my playlists so that I don’t need to rely on genres to play.

You could utilize Track Tags to identify your Baroque tracks. Or any other track type you might want. Although I would suggest waiting as the next big Roon update is focusing on meta-data which might include things like changes to track tags, which I don’t think have ever gotten a lot of love.

I would love to be able to select a genre and only have TRACKS of that genre (as labeled in my file) play.

As it is now, playing by genre is useless to me.

How did you go about assigning track level genres, was it automated or manual, what did you use as source?

well, dbPoweramp can embed a style and genre tag at the track level. But, it is the really the album genre/style tags not a to the track style tags as the same genre/style is the same on every track. Just ripped Beach Boys CD yesterday and noticed the style of “Sunshine Pop” attached to them. LOL.