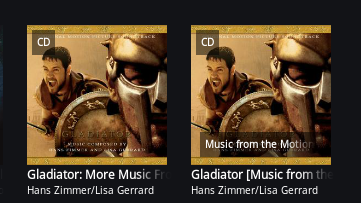 There are two different albums for this film: the original OST “Music from…” and “More music from…”.

In the album look-up you see the two variants but they are all equivalent and sit under the “More Music from…” version. So, even when selecting the OST, it is displayed as the other unless manually edited.

Can you remove the equiv please ?

this one was first reported August 2016, so could be a while before it gets sorted

@Nick_Stamp and @joel: There may be an additional issue with this particular album. I have the Gladiator (Music from the Motion Picture) release with the same cover art you show here. However, both the Roon title shown (“More music from the Motion Picture”) and the text of the review correspond to an entirely different album. I have attached a screenshot of the Identify Album hit, which seems to show the correct release (but with the cover wrong photo). However, scrolling through the 6 edit…

There was a complication, but I’ve made an edit

As usual, up to a week to propagate into your libraries.

@Joel this is now fixed for me
thanks
Nick