Golden Ears and the Power of Money and Eyes

Equipment gets better because we keep learning. We develop new tests that reflect what we are hearing that didn’t show up on older tests. Different technologies fail in different ways. We perceive these failures but may respond differently to how important those distortions and failures are. New materials, new technology needs new tests to continue to improve. It costs time and money to do research. That is reflected in the costs of some products. In almost any product line from one manufacturer, the more expensive gear sounds better: $60 vs. $600 amps from high tech manufacturing, speakers ranging from $650 to $30k from one manufacturing facility building essentially by hand. I’ve heard expensive set ups at audio shows that I did not like as well as my own. I’ve heard million dollar rigs I coveted the sound of, even though if I had the money, I wouldn’t want to build my house around them.

Audio engineers train their ears to hear things by focusing and discriminating. I’ve been in studios as a musician with people who not only hear but can describe exactly what they are hearing: noise, frequency variations, phase.

Spend what you need to solve the problems you don’t want to live with. Good to be aware of what compromises we are making.

Audio engineers train their ears to hear things by focusing and discriminating. I’ve been in studios as a musician with people who not only hear but can describe exactly what they are hearing: noise, frequency variations, phase.

This is so, I’ve heard it at sound checks. I also observe sound engineers using test music of all genres as they set up our LRB PA system, Music we would never present in a show, but that’s not the issue, he is listening for specifics to tune in or out etc.

I have also seen sound engineers deal with artists who believe something is wrong at sound check when there is nothing to worry about. Outside factors can effect a persons mood and this happened with an artist receiving a difficult phone call just prior to sound check. Nothing much was right and there was an atmosphere in the room…

I received a wink with the comment, it’s a DFA issue… What’s that? I asked… Do F…k all, was his reply.
He knew he was right, he understood the issue and on the night, when the Room was full, the sound was amazing. The Artist was delighted after all… No names to protect the guilty

One could answer with a proverb: the fox that does not reach the grapes …
yes, usually if it sounds better it costs more! but often what costs more is not well matched with the rest and for this reason it can sound worse…
the price doesn’t make sense, it’s just an access to what we can buy and what we can’t buy! 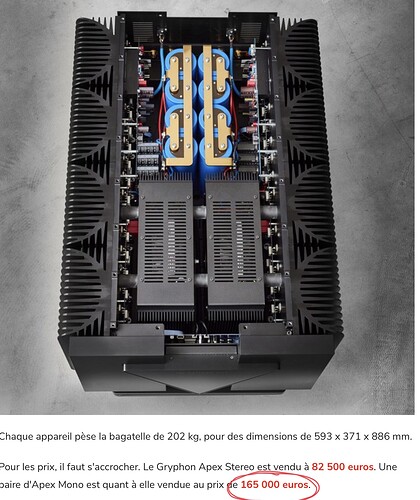 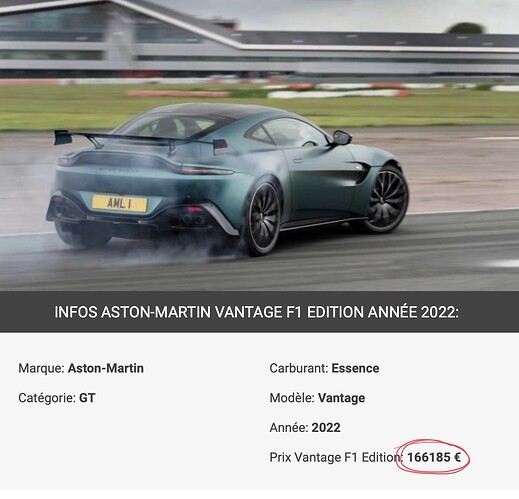 Any one – socio-economic status?
I guess the advantage of the Gryphon is that you get two (mono blocs) for (only) one (meagre) Aston Martin.

Also wondering if there’s an engineer out there who could explain and thereby justify the asking price of the Gryphon Apex (with a straight face, please). (It being understood, from genteel audiophile to genteel audiophile, that the Gryphon price divided by four will give you a clearly under-powered and sonically disastrous amplifier. Really, what do you expect from 40,000 €?)

Also wondering if there’s an engineer out there who could explain and thereby justify the asking price of the Gryphon Apex (with a straight face, please).

There’s a marketing bod or two happy to have a go:

Gryphon Apex amplifiers simply do not “see” the loudspeaker; in other words, Apex’ virtually limitless reservoir of power and current renders it immune to loudspeaker characteristics. No speaker load, no matter how reactive, can affect Apex’ performance. 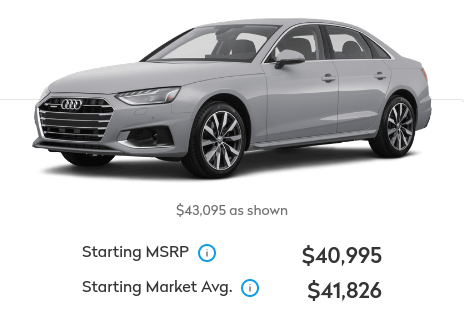 Does this mean that with the Apex we don’t need loudspeakers? Perhaps it will also replace DACs, power cords, interconnects, and - why not? - music itself. It may be enough to have the Apex in your room to feel deliciously audiophile without being molested by mediocre recordings.

That’s why I use one as the car stereo in my Vantage.

I’d take the Gryphon over the car any day. And continue riding my bike;)

Our stereo is our shrine. Think about the ancient shrine where we would pray, connect to gods, demand apology etc. those shrines or icons are our stereos, cars, wardrobes nowadays. the stereo is a prototype of a shrine. Nicely arranged opposite to our chairs or couches and well maintained. When money is not a problem then we’d pay whatever it takes to have the best. Wouldn’t we use the best materials in your shrine, the place where we turn to god? And once we have unboxed the newest item for our stereo, a sacrifice from us to the gods of hifi, of course we can hear the difference it makes, can’t we?!
( I am half joking

The shrine argument may be decisive.
It’s certainly a hassle to get the Aston Martin into your listening room. But then I wonder if the Gryphon can faithfully reproduce the AM growl. Doesn’t the AM have a clear advantage in that respect?

Value is not the same as price tag, is also not the same as performance, is not measurements either.
One could expect for linear relationships but that is a failed expectation, audio gear isn’t that different than most things in life.

But then I wonder if the Gryphon can faithfully reproduce the AM growl.

I seem to remember a Ferrari vs. Bang&Olufsen contest…

Now the price might be just a tad overboard but regardless of the price that is quite the impressive build quality. Those copper buses look like they belong in a 400 amp electircal service box. Hi: found your “ramblings “quite meaningful.
Ok I am a newbie to Roon, still on my 14day trial. 81 yr old so what do I hear? After playing music for 64 yrs.
25 yrs 50 person concert bands, 4 hr rehearsals in buildings being advised to wear ear protection gear.
6 yrs rock band with on stage amps and monitors
and now playing in seniors homes (ah that’s quieter)
So what am I setting up? Well not exactly expensive stuff as I will love to just hear music I want, where I want it and when I want it.
Hopefully Roon can do this. Not sure if I will get lifetime or 1yr subscription!!!

You raise very interesting questions. There exist clearly-defined perceptual limits with regard to amplitude, time, and frequency. Most of the variability in our ability to perceive sound can be accounted for, quite simply, by hearing loss. Among “normal-hearing” people, however, individual differences tend to be rather small. For example, up to a certain age, we can hear pure tones up to around 20,000 Hz. It’s the upper limit of hearing in the frequency domain. There is no way around that. And yet, many audiophiles claim to prefer the sound of high-resolution music. How can that be? Is the effect real, or is it an auditory hallucination?

There’s some interesting recent work showing that there might be a lot more to perception than we previously thought. So, to answer your question, the lesson is to simply accept that if people believe they can hear a difference they really do - even if there exists objective, quantitative evidence to the contrary. Why? Because, if we believe some of the current research, then it is possible that what we think of as reality might all be a hallucination. It’s what Mouse said in the Matrix: "Maybe what I think Tasty Wheat tasted like actually tasted like oatmeal, or tuna fish. That makes you wonder about a lot of things. "

So, to answer your question, the lesson is to simply accept that if people believe they can hear a difference they really do - even if there exists objective, quantitative evidence to the contrary.

I guess, it comes down to what one considers to be “objective qualities” of the device. Here’s a quote from the EtherREGEN website: " The award-winning EtherREGEN has been an amazing success—with more than 3,200 units shipped" By the time you’ve read it, that statement has already become an objective quality in and of itself. To the buyer, it’s not about FFT (or any other “objective” metric), but it’s about the product being successful in the marketplace. It’s “award winning” and it “sold 3,200 units,” therefore it must be amazing. By the time I hook it up, I am already convinced it’s improved the sound of my stereo.

if we believe some of the current research, then it is possible that what we think of as reality might all be a hallucination

Yes, this is what quite a few neuro-scientists believe. Of course, some people tend to hallucinate more than others, as some people are manifestly insane.
I’m reading David Chalmers’ Reality + at the moment; a book that takes a serious philosophical look at the possibility that we all live in a simulation.
The simulation possibility isn’t ready to be settled any time soon, and unless our creators/ manipulators reveal their hand, we may never be sure.
What I’m more interested in, as this is something to which there might be answers, is what makes people convince themselves that they can hear certain things. If we assume that beyond a certain price point, sonic differences are quasi non-existent, and if we further assume that people do hear scientifically impossible differences (and thus are not lying), the question is what pushes them to hallucinate. Such self-delusion doesn’t come cheap after all.
I tend to believe more and more that it’s a question of status. People generally spend close to their maximum on objects. Why would it be different with HIFI gear? You have a lot of money, well, you buy a very big house, an expensive car or watch or shoes, … to exhibit your socio-economic status. What I find fascinating about audiophiles is that they try to justify their big spending by claiming to be endowed with a superior auditory sense. Rather than just swatting off those who call into doubt the wisdom of splashing so much money on equipment by pointing to the fact that they can easily afford it, and that’s that.

" The award-winning EtherREGEN has been an amazing success—with more than 3,200 units shipped" By the time you’ve read it, that statement has already become an objective quality in and of itself.