Using Rockna Wavedream Net server that is Roon Ready…Currently eatablished Roon Core on Lenovo desk top. All good. Using Ipad 9.7 inch Pro as satellite from couch. Can I ditch the Desktop and the Ipad and run the Roon Core from my Smartphone Google Pixel XL Android?

If not , can I run Roon Core on a Google Tablet called The Slate which runs Chrome OS ? Basically I am an android and Google and windows type guy never really settled into Apple.

Thanks in advance,
Ed

The only hand held device you can run the core from is a Windows Surface tablet, minimum i3 processor. And then using wireless may cause problems depending on your home WiFi. I am going to be presumptuous and suggest that if you can afford a Wavedream you can afford a dedicated headless NUC or similar, wired into your LAN to run your core. Once working it would be maintenance free and you could run it from any web browser. You should also consider the Nucleus which isn’t cheap but accomplishes everything the NUC does by switching on, logging in, updating and pointing to your music. This all assumes you choose to stick with Roon.
Roons USP is it is mostly OS agnostic. The main thing to remember is your Core has to be on Windows, Mac or Linux (server only) hand helds are mostly control and endpoint only. Finally, while some have done it, Chrome is the one OS that Roon doesn’t support.

Thanks for your quick reply much appreciated. Please dont think I am stupid
with some of my questions or comments. I have been a vinyl guy since age 14
now age 60. I am a United Captain by trade and fly internationally.
So when I decided to forego my vinyl collection and try and also involve my
wife in an easier experience than the vinyl ritual.

Two years go by dealer says this Rockna is Roon Ready …it smokes the
Aurender and with an Inakustik USB cable you wont believe the difference.
So I sell the Aurender. Purchase the Rockna and the Inakustik USB cable. It
arrives I set everything up. My Lenovo desktop AIO is on wifi while our
house LAN is ATT Gigabit. Roon shows up on the PC and all gets set up
everything is great. Since PC far from Kitchen Island I load a Roon
something on my Ipad. It loads and I can now sit on the sofa and select
songs. Every now and then I get a message saying I cannot have 2 core or
else I have to purchase another member ship. Not sure what the workaround
is ; so I shut off the Ipad and return to just running the core off the
desktop.

Now I would like to get rid of the desktop and the Ipad. I would like to
have the easiest and best set up. I hear you saying I could plug in a Roon
Nucleus into a Lan outlet to run the core. Then where would the Rockna be
going? would it join the Roon nucleus.What would I do with servers on the
same LAN. I like the hands off the Nucleus . I do plan on sticking with
Roon. I love Roon. After two years with Aurender and Tidal and then
switching to Roon and Tidal it was amazing to hear what my Goldmund Rel
system sounded like.

So a little more “hand holding” and direction as we say in flying
appreciated and thanks in advance. 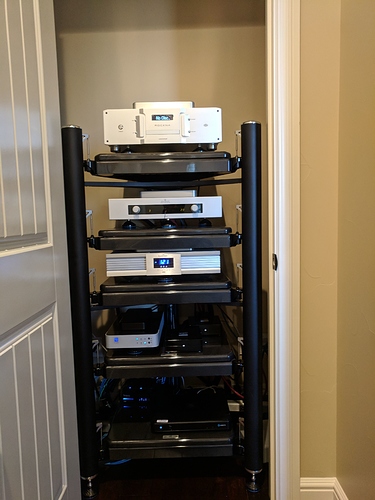 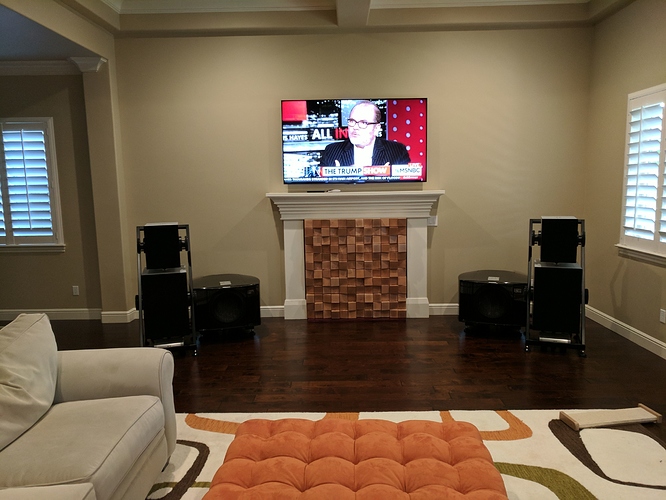 Just to verify here, is this a Wavedream Net that you are using as your Roon Core?

Every now and then I get a message saying I cannot have 2 core or
else I have to purchase another member ship. Not sure what the workaround
is ; so I shut off the Ipad and return to just running the core off the
desktop.

It sounds like you may have a Core running in two places (possibly the PC and the Wavedream Net) which is why you’re experiencing this behavior. The iPad itself is not a Core — it is just a remote device that connects to the Core.

Can you share a screenshot of Settings > General for me so we can take a look at what you’re connected to? 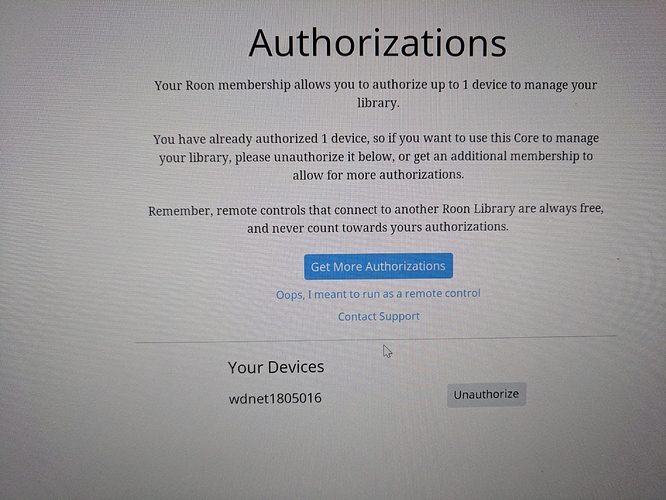 Here is the message I get. I was told on initial set up. Power up the roon. Look for it on the PC authorize it and it would load.

I am unable to provide setting at this point due to the system being down and in transition. I would like to return to the conversation when it is all powered up again or sooner per your instructions.

I was walked thru set instruction by Bob V in NYC . We set up the Roon as the Core. We set up my Goldmund Satya as the reciver. Nothing was done to change any sound parameters. Just straight forward.

You are in the right hands with Dylan. I am a huge fan of the Rockna designers work but Dylan is best placed to direct you on how to connect up and get the best from Roon.

Thanks for sharing a screenshot here. Based on the screenshot it looks like you may be trying to use the PC as a Core and the Wavedream as a Core. If you click “Oops, I meant to run as a remote control” and then choose the Wavedream as your Core instead that should get you to the right place.