Hi, I’d like to know whether we can expect Google Play integration at some point. I know sound quality is always debated with platforms providing compressed content (such as Spotify) HOWEVER Google Play’s LAME MP3 compression is far superior to Spotify’s, switching between Quobuz and Google Play I can’t detect any truly significant decrease in sound quality (this is unlike Spotify where a loss of detail is very noticeable). So from a sound quality point of view Google Play would really be great compromise as far as lossy streaming platforms go … I just prefer the larger and more up to date selection of records made available on the big ‘lossy’ platforms such as Spotify and Google Play. So at least one partnership with one of these would really be a great addition to the Roon offer.

Lol I would hardly call tidal grandfatherly.
Playlists like ‘Neo-Soul Folktronica’ to ‘Contemporary Afrodelic grooves’ and any and everything in between.
I think you may profit from a closer look at Tidal if you havnt in a while…

That made me smile…

Haha! My biggest gripe with Tidal is finding a way to filter out all that newfangled hippetty hop / rap stuff that tried to take off when I was young, and make it more grandfatherly

Back to the facts (not taste and/or views) I compared availability of some of the newer stuff and Tidal (and all other HQ streaming platforms) systematically lag behind or will never feature some of the stuff, so one way or another being on one of these will always have a limiting dimension to it.

That’s easy, just integrate the music you want from Tidal as you go.
Then there is no need to look at Tidal again except in context to what your already listening to in Roon or when you want to check new releases.

I don’t have any issues with Tidal except that it’s catalogue is not as complete as its competitors, this is actually true for ALL genres, it’s a real limitation.

Spotify is encoded with Ogg Vorbis at 320kbps, for its best quality, so should be at least on a par with Google Play Music. Many say that Ogg Vorbis is the better encoder. It is unlikely anyone will hear a difference from CD quality, with either services.

Of course streaming over cellular networks can result in lower bit rate streams.

Hi Jeff, actually Google uses the latest iteration of LAME which is reportedly now better than OGG Vorbis (which used to be the superior choice). From my personal listening impressions the Google Play content really has the edge over Spotify which sounds smudged in comparison, more than that I couldn’t detect any truly marked differences between Google Play content and Qobuz uncompressed files.

Nothing to worry about bit rate, I have a 1Gbit/second internet connection

… and as for listening equipment I use Chord Hugo or Shiit Gungnir Multibit DACs, a high-speed amplifier by austrian brand Crayon and a very accourate horn based loudspeaker system, so I do believe It to be able to render differences in source material fairly accurately.

Google music integration and better Sonos reliability/connectivity are the only two things preventing me from purchasing Roon.

Replying to an old post (but still 2017) here after this thread got a bump today.

Hiphop did a little more than try to take off.

"Hip-hop/R&B, on the other hand, is responsible for just over 29% of all on-demand streams across the country, and that is the only field that is growing noticeably. In fact, R&B/hip-hop is almost as popular on streaming services like Spotify and Apple Music than the next two genres (rock and pop) combined." 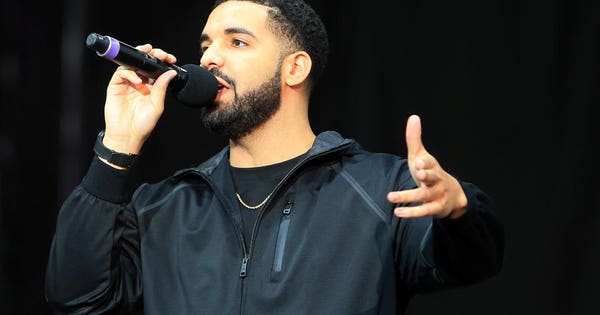 Report: Hip-Hop/R&B Is The Dominant Genre In The U.S. For The First Time

Rock used to be America's favorite genre of music, but that is no longer the case.

Hi Jeff, actually Google uses the latest iteration of LAME which is reportedly now better than OGG Vorbis (which used to be the superior choice).

What? this is just flat out wrong.

LAME, no matter how good is it, still produces MP3 (http://lame.sourceforge.net/). The VBR encoding of LAME is spectacular, but MP3 will never match Ogg Vorbis or AAC at same bitrates. 320kbps AAC or 320kbps Ogg Vorbis will always be significantly better than 320kbps CBR MP3 – VBR only makes the MP3 worse QUALITY, not better. The advantage of VBR is the size of resultant encoding.

Given that Spotify’s desktop can use 320k Ogg Vorbis by setting a setting, it will blow away anything LAME can produce, because LAME is limited to a codec that just isn’t that advanced. On mobile Spotify, you can also switch on up to 320k Ogg Vorbis, and on Web, you can turn on 256k AAC (which also blows away the MP3 options, including the higher bitrate 320kbps MP3).

Also, LAME hasn’t had an update in 5 years, until very recently, where only minor bugfixes unrelated to the codec (mostly security issues) were resolved. You can see the changes here.

Google Play Music is purposely cagey and not forthcoming about bitrates used, but they are open about their MP3 usage. In fact, if you upload music to Google Play Music, this is their conversion process, which seems to all be inferior quality MP3.

If you have some information I don’t, I really want to hear about it. If I misunderstood your post, then I apologize and await you to correct me.

Just out of curiosity, what does Tidal use on my mobile when set to ‘normal’ (lowest) quality? I use this when streaming cellular (not wifi).

Just out of curiosity, what does Tidal use on my mobile when set to ‘normal’ (lowest) quality? I use this when streaming cellular (not wifi).

I can only share what I’ve read… but it’s unclear if that information is valid since its being reported by journalists and not by API implementors. I’ve not done that test myself since we always ask for highest quality stream with Roon. The word on the street is that it is 96kbps or 128kbps AAC at normal, 320kbps at high, and FLAC at HiFi.

Hiphop did a little more than try to take off.

… one person might call it the “American Cheese” of music whereas I’d call it the ersatz Kaese. I realize that to those who love the genre this is offensively opinionated. Why not let those of us who feel this way (we number many) stick to the real thing?

Why not let those of us who feel this way (we number many) stick to the real thing?

Hehe no argument from me and I took zero offence and I definitely didn’t link to that out of defence.

Some may not know what the most popular genre is today so it was just for information. Of course some may not care and that’s just as fine too.

The figures actually caught me by surprise too, even though I am a fan of those genres.

Life is short. Let’s get back to loving whatever music we love

Went looking for Childish Gambino albums on Tidal, and was disheartened that I couldnt find them.

Reverted to listening to them on Google Play, will it ever be integrated with Roon?

I see them on both Tidal and Qobuz. Maybe they’re not available in your region. 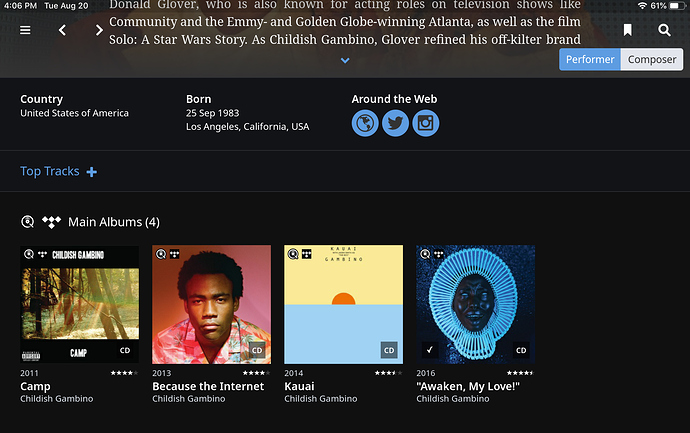 Either way, integration with Google Play would be nice.