I’ve seen from this strand that it’s been asked before. However has this feature been added? If yes (please!!) then please could someone point me in the direction of how to do it. Hopefully I’m just not looking hard enough…

No it hasn’t, they are still grouped or not.

Oh. Grrr. Is this something that’s being developed? (fingers crossed) It doesn’t seem like a complex thing to implement. But perhaps I’m wrong.

If each speaker is its own zone, you can, no? At least I do. (They all need to have the same connection protocol tho. So, all airplay, chromecast audio, etc…)

or am I not smelling what you’re cooking?

I think I need to look more carefully about zones etc. I’ll check tonight.
All the speakers I’m talking about are B&W Formation speakers which are ‘Roon Ready’. So presumably they are all using the same protocol (Formation) which sounds positive…
I’ll check.
Thanks Chris - your sense of smell and my cooking are aligned

Yeah, that’ll work. Of course, the problem is that one can’t save groups, for next time…

Oh. Really? So not actually a solution then…

Saving groups has been an ignored ‘Feature Suggestion’ for quite some time.

But I don’t quite understand this - when I select to group two speakers, they are saved… in fact, that’s precisely the problem! What I want to do is keep that ‘saved’ group and then simply have the individual speakers as an additional option.

I think we are disagreeing about what ‘save’ means.

What I want to do is keep that ‘saved’ group and then simply have the individual speakers as an additional option.

If I understand what you want, that can’t be done.

That has been a request for awhile, as mentioned. Please add a vote in the Feature Request section to signal your support.

I’m super confused. Because I have groups saved all the time. For chromecast I have an upstairs group, a full party group, etc…

And I see them in my roon zones as such: 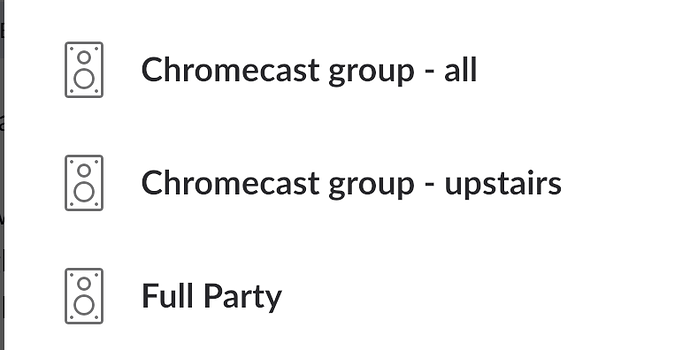 (Normally chromecast zones are indicated by the little chromecast icon, but if they are grouped, they appear as generic speakers.)

and I have a couple pairs of powered speakers in the master bedroom, both on different Airport end points, and I have grouped (and saved) them. (You can see that Airport uses a little linked chain to indicate a group.)

So all I have to do is choose whatever saved group i want to play to. They are saved. I don’t have to re-group them.

Or again, is this not what we’re talking about? What am I missing?

Again, the zones need to be the SAME PLATFORM for you to group them. (So, you can’t group a chromecast zone with an airplay zone.) Is that what you’re trying to do?

i understand this vote structure, but sometimes, like here and now, it’s frustrating to have to ‘spend’ our limited votes on a ‘feature’ that should be a fundamental ability - it really makes no sense to have to permanently group endpoints with no way to address individual endpoint after that. it’s clunky and i can’t see anyone debating that. so, sure, i’ll vote for this, but… i don’t know how there’s anyone who wouldn’t want/need the option of doing this.

honestly, i’ve never known a piece of software that commands such pay structure where feat reqs and bug squashing is such a fraught process of horse trading, snippy dev responses and lack of action. i’m not trying to be ‘toxic’, i’m just honestly saying, as a consumer of many high-end, programming-intensive applications for many niche tech markets… this feels at times more like a kickstarter project than a high-end subscription application. thanks for listening.

(You can see that Airport uses a little linked chain to indicate a group.)

The only zone that is grouped is the Airplay zone that has the linked chain. That’s what the chain indicates for all linked zones, AirPlay or otherwise.

or am I not smelling what you’re cooking?

This does not work for me…at least for R.A.A.T. zones. Following your example, if I create Group 1 and then try to add speaker 1 to group 2, Roon removes it from Group 1.

As far as I can tell, a zone can only be in one group at a time…and if a zone is in a group, you can not to play to it separately without ungrouping.

What bugs me is that I like to have volume leveling enabled since groups are usually used for background music. Whenever I form a group, I have to re-enable volume leveling because Roon does not “remember” any group settings.

This does not work for me

It won’t work for anyone, using Roon.

I suspect @terzinator is doing something like this from within Chromecast.

yes, indeed. You’re right on the chromecast zones. From the google home app, i can create groupings, and then roon sees them.

But I think I saved the airplay group from within roon itself.

But like i said, it has saved all the groups i’ve created. They don’t go away.

Exactly. With Chromecast you can create a group on Chromecast, and Roon will see and add Both the individual endpoints as well as the Chromecast Group.

But I think I saved the airplay group from within roon itself.

But like i said, it has saved all the groups i’ve created. They don’t go away.

That isn’t what the OP is asking about. There’s been a long outstanding request for Roon to save groups to be accessed whenever.

Your Airplay group will stay around, but you can’t play to individual zones within that group unless you ungroup and that is permanent until you group again.