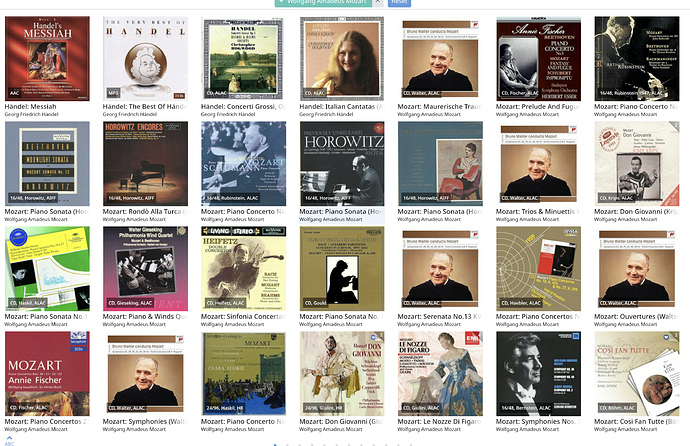 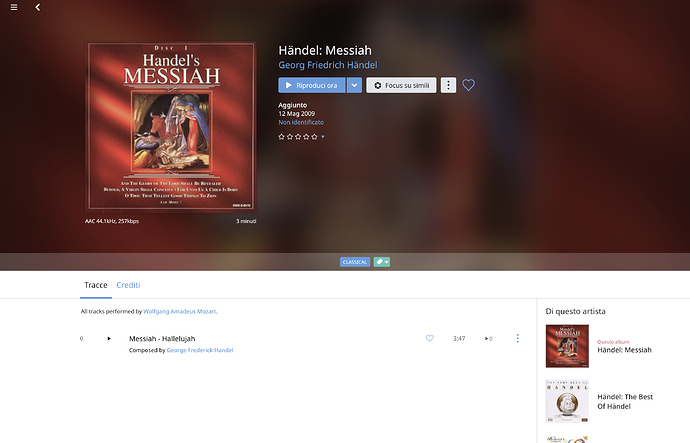 @Maurizio_Nencini That album is not identified, so it’s likely that the Mozart is coming from your file tags. Perhaps it’s worth a check?

yes but the file Don’t contains Mozart referrings. I edit (in Roon) the file with my personal data and not Roon data.

This is a known problem with roon search, particularly Classical search, that is raised periodically. I haven’t seen any indication from roon that they intend addressing it or even believe that is an issue, but I might have missed something.

Core Machine (Operating system/System info/Roon build number) MacBook Pro. iPad with the Roon remote. Network Details (Including networking gear model/manufacturer and if on WiFi/Ethernet) Audio Devices (Specify what device you’re using and its connection type - USB/HDMI/etc.) Description Of Issue Hi, I use Roon primarily to organize my classical music collection. Sometimes albums by one composer (say Schumann) will be included when I search for Chopin. How do I move these Schumann albu…

As you can see (attached screenshot Handel fireworks etc.) under the cover “all tracks Performed by Wolfgang Amadeus Mozart” it’s simply ridiculous and this is one of many (too many) Roon mistakes. With these issues Roon Lab is useless. iTunes is so far better for me.

It’s not even an album - it’s a single track plucked from who knows where. Hardly surprising that Roon has issues trying to deal with it.

I don’t know what to suggest. Many will agree with you. The only thing I can think of is that for many basic features like search roon believes that the rules change when incorporating streaming services and that their current approach leads to optimal results for most of their user base. However, very similar complaints are bleeding through from discovery, genre handling, radio, recommendations etc. These areas are also plagued with odd, often irritating and far from optimal results for many of us. Maybe roon will reconsider it’s general approach in the light of this. I don’t know.

I hope this because now is useless. I payed for one year but I think I throw away my money. Too many issues for an application that coast 119$ per year.

Tony, I don’t think that this is a search issue. I suspect it’s more to do with how the local collection has been organised by Maurio. From that first screenshot, it appears as though the structure is not the usual Artist/Album hierarchy, but some alternative form. Probably, like many of us, Maurio has been collecting for years and developed his own preferred way of organising his library. As you know, some of these structures can lead to issues when Roon attempts to identify what albums exist in the collection.

It’s down to Maurio to decide what to do; either write off the investment of $119 and forget about Roon, or invest some time in reorganising his collection into a form where Roon can identify albums and eliminate the errors.

Yes, I missed that. An unidentified singleton like that often happens where roon has split the album, maybe because album titles are not consistent at a track level. It might be possible to fix this particular case if there are other album fragments that can be merged.

However, in general I also find problems with search and personally see very similar categorisation issues with discovery, radio etc. that don’t make a great deal of sense to me. There are several posts on this general search theme and I personally find very similar issues with discovery, radio, recommendations etc. I am only guessing but I assume that the underlying search logic is also used in these other functional areas.

It’s not uncommon to find albums tagged with

I have no clue why , I suspect there was no Composer Tag in the early days and “What were once vices are now habits (good Doobie Brothers album btw)

If you’ve bought the year you may as well use it , admittedly it’s a steep learning curve but there a lot more good stuff than bad stuff

I still have a love hate relationship with Roon, I keep my JRiver library current to handle some of the tricky bits where Roon is weak like big classical box sets

The Messiah - Hallelujah track — Is it the only track for that album that you imported, or should it be a part of a larger album?

If it’s supposed to be just the one track, can you share it with us by sending a PM including a shared Dropbox link to the file?