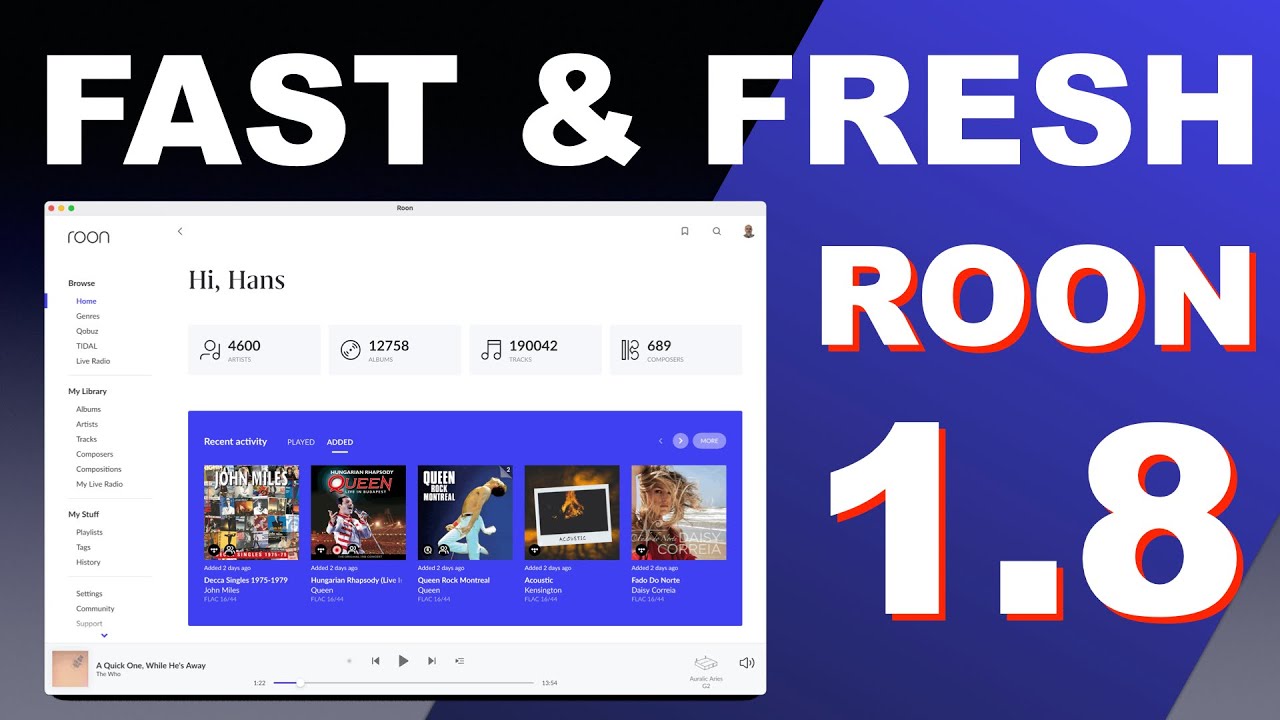 He is a good reviewer for Hifi equipment!

I can never finish any of his videos.

I like Hans and always enjoy his content.
Think he gave a very fair review of 1.8 here and was the voice of reason at the end regarding the flamers of the last few days.

Why? I admit he can be more passionate in his gesture and tone, but he is pretty analytic and I adore this.

This is a very informative review.
Well done Mr. Beekhuyzen

A wonderfully honest overview of what 1.8 brings and a great balance to the immense and often unfounded vitriol posted in these forums over the last few days.

Was just coming to post this link, glad to see it’s here. I’ve yet to upgrade to 1.8 and found this video a balanced antidote to the uproar on the forums. Hans even addresses our forum itself.

After reading all the reactions on the forum I had concluded that it might be possible that Roon has been ruined. After watching Hans’ video, those concerns have been put to rest. I see a GUI that’s a bit different than 1.7, but hardly revolutionary. It’s a bit cleaner version of 1.7.

I realize some of the functionality, like tagging, has been made more complex. And Hans does say that the 1.8 release needed more beta testing as there are more bugs than there ought to be. But Roon will sort out the bugs.

My takeaway is that Roon remains the Roon I’ve come to rely upon as the core of my music library management. The new GUI looks good to me. I’m sure Roon will fix the bugs. And hopefully they will consider fixing some of the design issues that have been raised here, like tagging, etc.

I’m still going to wait a month to allow the bug fixes to manifest. Hans’ video has set most of my concerns to rest. It’s still the Roon that I’ve come to know and love. But Roon has brought a lot of this noise and consternation upon themselves by rushing 1.8 without doing the proper beta testing. That oversight has intensified the vitriol, much of which could’ve been avoided with a more thoughtful rollout.

I have no concern that Roon remains a high quality product, likely a better one than 1.7. I do hope Roon can survive this self inflicted PR storm.

In the wrap he says something about 1.8 being prettier/purer? ‘unintelligible’ word compared to 1.7. Does anyone understand what he said?

I used to be a Patreon but got tired of the same dry format. I still do value his opinion though.

In the wrap he says something about 1.8 being prettier/purer?

Good question. It’s at about 12:08. I can’t figure it out either. I’d be surprised if it’s “prettier” as that would be an odd thing for Hans to say as concluding that 1.8 is “prettier” or “purer” would not require an active version of 1.7 to deduce. It’s a Dutch mangling of an English word, but I’m not sure what he’s saying.

It might “speedier” as that’s a performance issue that could be deduced by comparing 1.8 to 1.7. I’m putting my money on “speedier”. The title of his video includes the words “fresh and fast”. He addresses fresh extensively, but never the speed. Except in our mangled pronunciation during the wrap.

he says something about 1.8 being prettier/purer? ‘unintelligible’ word compared to 1.7.

“Speedier” in other words, faster

I have no concern that Roon remains a high quality product, likely a better one than 1.7. I do hope Roon can survive this self inflicted PR storm.

It isn’t self inflicted unless success can be considered self inflicted. Roon has grown from a quirky little company with a great idea to a very prominent player who has made a few enemies along the way. Having been around this forum for a while it seems pretty obvious to me that what has been happening since 1.8 isn’t normal.

Now when I was listening to the Audiophile podcast in January, they did mention something about stakeholders. Whether that’s financial stakeholders or just those that take ownership of the development as its interchangable language here. Maybe it’s financial and they have been pushed to release something new before its ready. It does seem at odds to what’s become before. I have not seen a such a buggy release from Roon before. Perhaps it’s got too big to keep a hold on the development properly, bad communication or as mentioned financial pressure. But I does not seem normal Roon practice.

Could be because I find him trying to state the obvious or say simple things in the most convoluted ways, and has a large self-importance aura. Probably haven’t spent enough time to notice the analytical side.

I know and understand he is popular, have seen posts here referring to him earlier. It always surprised me a bit, but it is as with everything. Taste differs and it is ok.

Having been around this forum for a while it seems pretty obvious to me that what has been happening since 1.8 isn’t normal.

I can‘t judge what amount of vitriol might have been brought up by 3rd party „agents“.
Do you think that it was a wise decision to release a software with known potential serious localization issues without any release notes to an audience that was hyped up by a never experienced 5 day marketing countdown?

I just watched it and found it a very fair and balanced.

I watched a lot of of Hans YouTube videos when I first started with Roon and have followed him since and while I don’t agree with everything he says I generally watch his new video every Friday night.

Glad to see his comments on the doom sayers in these forums because the world has not ended and we are still enjoying music via Roon.

I can‘t judge what amount of vitriol might have been brought up by 3rd party „agents“.
Do you think that it was a wise decision to release a software with known potential serious localization issues without any release notes to an audience that was hyped up by a never experienced 5 day marketing countdown?

I think that there should have been more thorough beta testing. Releasing software with known issues is a different matter and I am not sure I accept the notion that that was an intentional act.