Most of the times with a software update I have to restart my NAS by hard-reset. In the proces of stopping and restarting RoonServer on the NAS it ‘hangs’. After a hard reboot everything works as normal. Is there anything I can do differently to avoid resetting my whole NAS everytime?

…restart my NAS by hard-reset

Do you mean, recycling the power? If so, that’s not a great idea. I imagine your NAS has either a web interface or ssh access, so use these to restart individual services or the NAS.

Of course, but if I stop and restart Roon, it hangs. So the only solution is to cut off the power and restart the NAS again.

So the only solution is to cut off the power and restart the NAS again.

I don’t think this is correct. There must be a graceful way to power down the NAS. By dropping the power, you are more likely to cause other software and hardware issues.

Indeed, if you press and hold the power button, until you hear a beep, it will shut down gracefully. Alternatively, use DiskManager to shut down or restart the NAS.

Incidentally, the NAS specification is underpowered for Roon, with low single thread performance. This may be the reason you are experiencing problems.

Thanks Martin, but the only way to solve the stall is to reboot the entire Nas. Maybe I just encountered the limits of my system…

I believe @Martin_Webster is suggesting that you use the “Restart” capability versus pulling power. When you pull power, you’re potentially risking data loss and / or corruption. DSM has a restart option as displayed here: 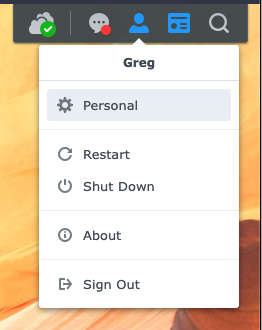 Have you tried that?

I can’t speak to why you are having the issue in the first place. I might suggest that you try the Docker approach but I’m concerned that your system is underpowered for that strategy. Good luck with this - hope you figure it out.

Thanks Greg_Friedman! Restarting the Server app is resulting in ‘hanging’. It says it is busy starting again but stays in that condition.
Looks that my system is not catching up anymore with progress