Find album reviews, stream songs, credits and award information for The Django Reinhardt NY Festival: Live at Birdland - Various Artists on AllMusic - 2001 - Whether or not many jazz guitarists have any… The Sheik of Araby

"The Sheik of Araby" is a song that was written in 1921 by Harry B. Smith and Francis Wheeler, with music by Ted Snyder. It was composed in response to the popularity of the Rudolph Valentino feature film The Sheik. In 1926, to go with the film The Son of the Sheik, Ted Snyder worked parts of the melody into "That Night in Araby", a related song with words by Billy Rose. "The Sheik of Araby" was a Tin Pan Alley hit, and was also adopted by early jazz bands, especially in New Orleans, making it a...


we have that he should be Harry B. Smith (ie Harry Bache Smith) Harry Bache Smith (December 28, 1860 – January 1, 1936) was a writer, lyricist and composer. The most prolific of all American stage writers, he is said to have written over 300 librettos and more than 6000 lyrics. Some of his best-known works were librettos for the composers Victor Herbert and Reginald De Koven. He also wrote the book or lyrics for several versions of the Ziegfeld Follies. Smith was born in Buffalo, New York to Josiah Bailey Smith (born 1837) and Elizabeth Bach (born 1838). ...

same infos also on discogs
it seems that a Harry Beasley Smith does not even exist.
there is a (John) Beasley Smith

John Beasley Smith (September 27, 1901 – May 14, 1968) was an American composer and big band musician. "That Lucky Old Sun", one of his better known works, was covered by many well-known artists. He often worked with Haven Gillespie and toured the nation with his group, "Beasley Smith and His Orchestra". Beasley Smith was born in McEwen, Tennessee. His parents were teachers. The family moved to Nashville when he was in elementary school. While in high school at Hume-Fogg in downtown Nashvill... 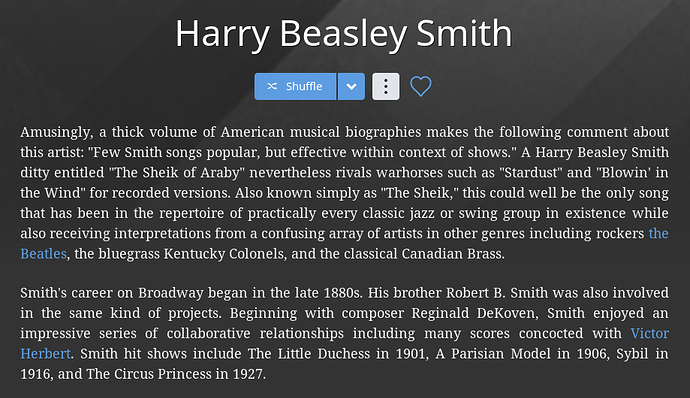 so, really, i don’t know who is right… but wiki+discosg wins over rovi 2 to 1

@dylan, sorry to say this, but in my library nothing changed.