Has anyone else noticed a severe degradation in performance?

Over the last several weeks or so? @support

I’ve assumed it was on my network, but speed tests are fine and I haven’t noticed it in any other context. Google’s speed test rates me at 130 mb/s; Ookla’s got me 152 down (well over 200 up)-- and I just waited more than a minute for a song (from Tidal, via Roon) to play. That was extreme, but I’ve noted persistent performance degradation. Every Roon operation is far slower than I remember it being just a short time ago. Simple operations that were fast enough that I didn’t notice now are slow enough to be REALLY annoying. This performance–which, again, is over the last several weeks–is the worst I’ve seen since I started using Roon (years ago).

Just spitting here, but I recall seeing a message from @Brian recently:

Recently, we moved 95% of our cloud infrastructure to a new cloud provider, and transitioned most of our services into a container-based architecture …

which made me wonder if perhaps the differences were on Roon’s end.

More likely: Considering the pretty good download speeds (and even better upload speeds), what would explain a sudden change in Roon’s performance? I have not vastly expanded my library or anything like that. My setup is simple: a ROCK plus a couple of remotes.

Has anyone else noticed anything similar.

P.S. Grabbed this quick, partial screen shot to give an idea of what I’m dealing with. 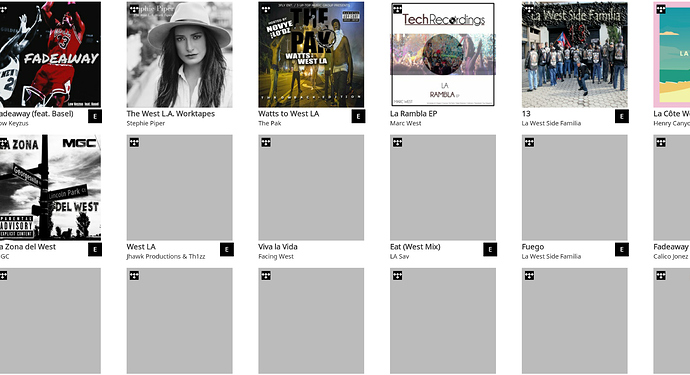 You gave two examples, but neither of them involve any communication with our cloud services–starting TIDAL playback is done directly between the Core + TIDAL, and loading artwork is communication between Core+Remote (all artwork displayed on that screen is pre-downloaded by the core–it is never passing through requests to the internet at the time of screen load or anything like that).

I’m not sure this is, but none of this so far points to our recent rollout. Given that you are seeing stuff wrong when the internet isn’t even involved (the non-loading album art), I would be thinking of this as a local problem. Perhaps a performance issue on the core, or a networking problem at your location.

I’m going to move this to the #support section so that @support can help you troubleshoot further.

You gave two examples, but neither of them involve any communication with our cloud services

Thanks Brian–something that perhaps should have been obvious to me, but wasn’t. I assumed that there was some interaction with the cloud at least when Tidal titles that are not in my library are involved; but then, the change in performance is ubiquitous. It affects everything I do in Roon. It appears that my communication with the wider world is much faster than my communication with the device just a few feet away.

My setup, fwiw, is conventional, and nothing has changed. I’ll look forward to a response from the @support folks.

Whenever I get performance issues I found my RAM is saturated and a re start of the core solves it. This may not be your issue but who knows?

What device is this runninng on? Had similar issues running a Windows 64 bit client. Changed to 32 bit client, problem went away. Something about windows update installing intel graphics drivers that break opengl.

I’d reboot network switch, server and remotes and see if that cleans the pipes so to speak.

Thanks for contacting us regarding this issue, I’d be happy to assist here.

We have sometimes seen sluggish behavior if there are too many tracks in the play queue that have already been played, can you please try clearing out your previous queues by pressing “Clear Upcoming” and “Clear All” on the Now Playing screen and then rebooting your Core, Roon Remote, and all of your networking gear?

I would also make sure that you are running the newest Roon Version (build 363) and are using the newest firmware on your DAC, please double check this info as there have been improvements on both ends.

Please let me know this info when possible and if you’re still having issues afterwards, just let me know.

I would also make sure that you are running the newest Roon Version (build 363) and are using the newest firmware on your DAC, please double check this info as there have been improvements on both ends.

Norris, everything is updated, and was already, except that my DAC manufacturer released a firmware update a few days ago, which I had not yet installed. I did all the clearing and rebooting. I’ll need to use it a bit to be sure, but preliminary observations are encouraging. Right off the bat, things seem much snappier. I’ll write in again later today to confirm.

Not a great evening of experimenting–other stuff to do–but assume it’s solved. If it’s not, I’ll post again.

I did all the clearing and rebooting.

I had very similar experiences recently, particularly loading album art akin to your picture further up. I also found that rebooting my ROCK-based NUC resolved it. Perhaps it’s a RAM issue as @Chrislayeruk suggests, though no way to know on ROCK.

Perhaps it’s a RAM issue as @Chrislayeruk suggests, though no way to know on ROCK.

That’s actually a good point, there’s no way to know without booting into the BIOS! Perhaps the Rock system status screen can be updated to include RAM usage - one day.

I am having the same issue. My network is a Synology RT1900ac with latest firmware. My Roon client is on an iMac running 10.14.2 via Ethernet, the ROCK is an i7 NUC 8GB RAM, a 256G SSD internal and 6TB RAID on USB3 on the LAN. ROCK is the current build.

When the system was installed it ran without issue for a few weeks, then suddenly I started getting the same problems noted above, images not loading, frequent “Connection lost” or “Waiting for Remote Core” errors, tracks loading slowly or not at all, whether Tidal or ROCK.

Everything has been rebooted several times.