Just curious. Probably a good comparison would be the Pro-Ject S2

The DAC is using a switchable filter for both PCM and MQA, which is good. Using Default MQA filter when playing back normal PCM can indeed compromise sound quality. The USB input for most chinese made DACs have poor support for linux based USB connection. if you decide to use Roon ROCK or other endpoints that support USB linux based connection, you should try to see whether it works both PCM and DSD.

I have two SMSL DACS - the VMV D1 and the SU-8. Both are fantastic at their respective price points. I am looking at getting into Tidal soon as well as moving from Logitech Media Server to Roon at some point. I would probably get this DAC based on the measurements at Audio Science Review: SMSL M500 Review. I would pair this with an Allo streamer to my main rig and compare it to my existing Logitech Transporter.

I just picked up an M500 and it works… perfectly. No configuration needed… Just plugged it into my small Windows 10 PC (a 6 year old small fanless gigabyte brix) and connected the audio out into my old receiver. Worked like a champ. Recognizes MQA streams from Tidal no problem. For the money I’m very happy with this

Just got one of these curious to know how you have yours setup and what is the color of the led next to the MQA symbol? Thanks for any info.

It’s on the built-in LCD, and it’s blue… so technically not an LED…

My set up is just via USB into my Roon Core, and analog to an old Sony receiver. BW speakers

Interestingly, I’ve never really looked at that ‘LED’ before. I have just played a different album from Tidal and the LED is green now. With the other album it was blue
It seems the difference is on the “Authentication” step in the signal path. It is blue for “MQA studio”, green for just “MQA”

Not sure I know what the difference is.

No I meant your dac device setup in roon I set it up several different ways and have found setting roon core to on and setting dac to rendering only produces best sound IMO and the magenta dot comes on. 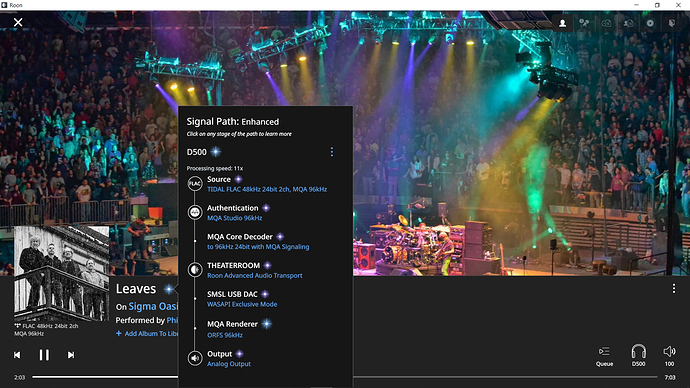 Ah I see now. I was able to get this same signal path with the same song (great album by the way, thanks for the tip). You were testing with a higher quality MQA source on Tidal than I was.
Interesting, I changed it back to decoder and renderer and got the same signal path except it says “Full Decoder”. Both cases showed the magenta dot and 96khz.
Can’t hear much difference, but when I get a chance I will turn up the volume and also check it with the headphones.

Funny only way I get magenta dot is rendering only otherwise blue or green, seems to be decoding tho shows proper sampling rate on screen. Just trying to run it through all its paces to make sure its functioning properly so far so good nice little box works great with foobar also.
Yes I am enjoying the new Phish music also:)