In addition to the full file path of some of these missing albums, can you also give “Force Rescan” a try on that storage location and let me know if it changes anything? 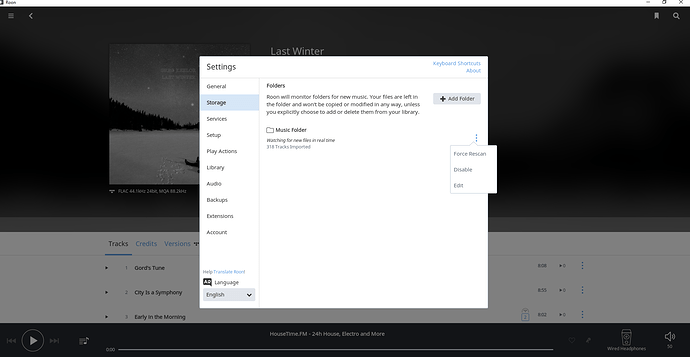 Just to clarify, there are several more than just the two albums missing. I just used those as examples. So far I’ve counted at least 10 more that aren’t showing up but there are more. I did force rescan but nothing has changed. One thing i noticed is that the number of files scanned far out weighs the number of tracks imported. Last time I looked it was scanning well over 21,000, but the tracks imported has stayed stagnant for days at just under 19,000. Is that normal?

Thanks for all your help with this. I really do appreciate it.

Thank you for letting me know that additional information. Can you please let me know if these albums have ever showed up in Roon? If they did show up previously and only went missing after a while that would be an important data point.

I spoke to the QA team again regarding your case again and they suggested that we try with a fresh version of Roon to see if there are any changes in behavior here. Can I please ask you to do the following?

No those albums have never showed up in Roon. They’ve always been missing.

I followed the instructions and it is currently rescanning. So far neither of the albums have showed up, but it’s still very early.

Can you tell me if it is normal to have such a wide ratio between number of files scanned to the number tracks imported? It scans so many files but maybe 10% show as actually being imported.

The reinstall and rescan is complete but there is no change. The missing albums do not show up. The number of tracks imported is the same. One thing I noticed though is that after I re-downloaded and reinstalled Roon, when I opened the newly dowloaded app all of the artwork and folder paths from the original Roon were still there. I disabled and removed the folder paths that were left there and then reentered them as before. Does that sound right?

Yes, I would expect the scanning vs imported piece of the puzzle to be part of the issue you are experiencing.

All of the “blue” links in my previous posts are click-able including the Database Location link, since you are running on OSX, you will need to open your Roon folder by using the following steps from the guide:

Hello, yes I did all that. Do you think I should uninstall and wipe the slate clean without backing up the old roon? So delete all Roon activity and start from scratch? It is backed up as instructed but like I said, my old folders were still there (probably not playable though) when I reopened the new roon app.

Yes, you can give it a try.

If you have the backup saved you should be able to restore it again at a later point in time but starting fresh and ensuring that the database does not contain these folders will be our best method forward.

You can go ahead and uninstall Roon, remove that old Roon folder and reinstall the app from scratch. After doing so you can add the NAS location again and please let me know if there is any change.

OK, I gave it a try but there was no change. The missing albums show as missing even before I add the folder in Roon, so even without scanning them again I can see how many folders are missing when compared to what’s actually in my NAS. I have no idea why or how. What else can we do? Is it worthwhile to keep trying?

Yes, I believe it’s worthwhile to keep trying to resolve this issue. I just had a discussion with the technical team today regarding your case here and we have come up with a few other useful tests based on your feedback:

I’m confident that we can get to the bottom of this issue and apologies again for the trouble here. I look forward to your response when possible.

I’m responding to your latest post in this thread so that we keep all the info in one place, your latest PM for reference:

So some good news is that the albums that were missing are now found. I was able to simply drag them to the watched folder and eventually they showed up. It just takes a while. I am noticing though that the rescanning happens often and even when I set it to just every 24 hours, it still takes a long time and I am not able to scan through the library very well during the process. is there a way to manually rescan as a default? Similar to manually reindexing my library like on BlueOS?

Now, I am still running into some big issues. The interface freezes often and stops playing tracks and then skips to the next one. I assume this is due to the connection but I have not had these problems with other streaming apps outside of roon, even with BlueOS. I am also having an issue with my iPhone app finding the core and thus not syncing with my library. It was working for a day but hasn’t in the last week.

Can you please expand on what you mean by “rescanning happens often”? How exactly often does this behavior occur? Once an hour? Once every few hours? You mentioned you set it to every 24 hours, did you perform this in the Roon Settings -> Storage -> Edit menu? 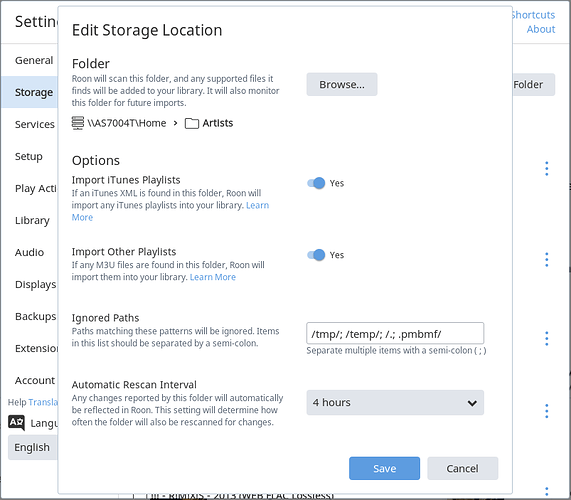 As for your second part of the update PM:

This sounds like your Core might be having difficulties communicating on the network. We have previously seen Apple router provide sub-par Roon experiences (as mentioned in our Networking Best Practices Guide), so this might be what you are seeing here. Other Non-Roon apps don’t quite use the same topology of Files -> Network -> Core -> Network -> Endpoint, and it seems that things are not working as expected on at least one part of this chain.

You also mentioned that your Core is on WiFi and this may be a factor here as well. If you try temporarily connecting the Core via Ethernet, do things improve and remain stable? Even as a temporary test this would be a great data point to have.

OK it seems to be working. If I want to use my phone as my audio player with Roon, am I able to do that, or does it have to be made the Core? Is an iPhone only capable as a controler?

Also, I am still torn about taking the plunge and buying the year subscription. I love the interface and control over my music, but I hate that I can only subscribe and not own, at least not for an affordable rate. I definitely cannot afford the lifetime purchase so yearly is my only option. Do you allow a monthly withdrawal from my account, or does the annual subscription have to be paid upfront? Respectfully, this is the highest costing one I’ve seen, granted it’s the best one too, but it’s so much more than the others out there.

Glad to hear that my suggestions helped you out!

If I want to use my phone as my audio player with Roon, am I able to do that, or does it have to be made the Core? Is an iPhone only capable as a controler?

You can use the phone as an Audio output, but first you would need to enable this zone in the phone’s Roon Settings -> Audio tab. You cannot install the Core on the phone, you will need a PC that meets Roon’s Minimum Requirements, but if the current one is working well there is no need to switch Cores.

As for your payment question, that would best be answered by the accounts team as I am not too familiar with this aspect. I will send a private message on your behalf and they can clarify this further with you directly.