HDMI A and HDMI B?

what are the two HDMI ports on the Nucleus for?

I don’t have a Nucleus (Rock user) but I seem to remember that you can use them to feed music in either stereo or multi channel out of them to something like an AV Amp.

I was thinking the same thing.
tried yesterday instead of using usb hdmi, nothing arrived at the dac.

I have to ask, but did you enable the output to for the devices in SETTINGS->Audio and can you confirm that the DAC is HDMI and not something that looks like HDMI like I²S ?

Yes I have one of those as well, it’s a completely different type of connector that looks like a HDMI, Ethernet or other type of cable.

If you have access to a Home Cinema AV system then that might be worth looking at trying.
I never did as I had Tidal and YouTube music on the TV and never actually used them, I watched lots of concert videos on Plex but I bought a separate system as I wanted to have music in proper high quality 2.1. Unless you have actual 5.1 (or Atmos) mixed music I was always left disappointed.

looks like an HDMI, thought to achieve a sound improvement over USB.
a shame, I have to experiment with the coax!
thanks !

No problem and have fun, most of us love to experiment and find ways to spend more money on our hobby.

In most cases I have found USB to sound very good with my various devices, though I often like to have a Coaxial cable plugged in as well to switch to. Sometimes they sound slightly different, though coaxial trends to be limited to 24/96 (in most cases) and doesn’t tend to offer DSD which I do like to listen to (even converted from PCM)

probably only USB really works.
possibly. another mutec clocker in between !?

Do you have a streamer with Coaxial or Toslink connection?
I have some Pis with Hat board’s, a Zen Stream and a Matrix audio Mini-I Pro 3 so that can be useful.
Plenty of cheap Hat board’s for Pis as a starter if you want to give it a try and lots of learning and fun to be had A/B listening

I’ll experiment with that from Monday. 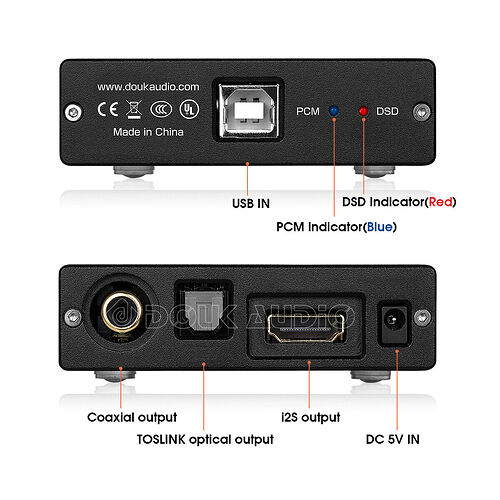 Dieter so you drive that over USB and then get the cleaner sound fed ito your Dac, is that how it goes?

michael, currently I’m using Nucleus USB A for DAC USB B.
works great.
i will not get the toy until monday, then i will test the other 3 options.

Cool and have fun

Thanks and a Fine Weekend.

Looks like a neat toy as long as it doesn’t degrade the sq in any way.
Nice to experiment though.
Have fun

Be aware there is no standard pinout for I2S over the HDMI connector. Not sure what DAC you have but if you plan to convert USB to I2S over HDMI make sure the pinout on the convertor is compatible with your DAC.

HDMI outputs A and B are equivalent. Works great with AV receivers. Used this connection for a long time with Denon 4400, great sound at 32/192. There was a setting for the Stereo mode, with its own DSP program, the front speakers were connected to the Denon by biamping.

So the two HDMI output ports are the same? Any information on which of the 2 HDMI inputs on Holo Audio MAY DAC to use and what other configuration setting to use on the DAC to match up with Nucleus output?