I am a new user and after concluding my trial period will be subscribing. Been on a 30 day trial. I have a question regarding setting up my gear for best sound.

I had SONOS gear, plus a Meridian Explorer 2 running from my Mac Mini with 2TB ssd, and various Connects and a couple speakers.

I have migrated instead of the SONOS (still have my Meridian) now to Bluesound, and have a Node 2i, a Node 2 (and maybe will add one more of either of those) a Pulse Flex, and a Pulse P300. All but one item is refurbished with warranty, the last is just plain used, but in great shape.

Everything is set up and working, with no more glitchiness than I had already in SONOS (some dropouts, which I think are related to needing to upgrade my 2017 TPLink AC 1200 router, other wi-fi devices in the house sometimes also struggle).

I was testing the Node 2i in my main room as against the Meridian, (and also was testing the other gear), and was trying to figure out the best way to set things up. Should I have tone controls on in BlueOS? Or have those disabled and let Roon do that work? Also, how best to set up the MQA rendering in that gear? Roon is letting the Meridian do both decoding and rendering, whereas the bluesound stuff is running in “enhanced” mode I think, and Roon is handling decoding (as I understand it. I may have this wrong?). I could also try the Meridian as a DAC running out of one of the nodes just to see how that is.

Does Roon have tone controls if I want to tweek a room one way or the other? Or should I do that in BlueOS? Also, what would be considered “stock”? I was thinking I could get everything set to stock, and mess around from there to see what sounds I like in each room, as each power source and speakers connected to each node are different, and of course the Pulse speakers are all different.

In other words, I am a newb and am interested in input on the best way, or a good logical way, to work this through as I finish setting everything up.

So far liking this combo much more than our SONOS gear (which was going to go legacy, or at least 5 out of 6 units were), in terms of sound, and music experience. My wife will be using her speaker (the flex, in her small office) separately, and mostly just through the Spotify and sometimes the pandora apps. So will likely end up setting up that speaker differently to sound better with those sources. Only sometimes will that speaker be included in groups with the other end points.

Also, how best to set up the MQA rendering in that gear? Roon is letting the Meridian do both decoding and rendering, whereas the bluesound stuff is running in “enhanced” mode I think, and Roon is handling decoding (as I understand it. I may have this wrong?)

Both Meridian and Bluesound are both MQA decoder and renderer, so you have a choice in Device Settings. I suggest you set them to Renderer Only so you can make use of Roon’s DSP functions without affecting the MQA stream.

Regarding Bluesound devices, Roon will show Enhanced because these devices have built-in DSP (crossover and EQ) that enhances the signal. See image below. 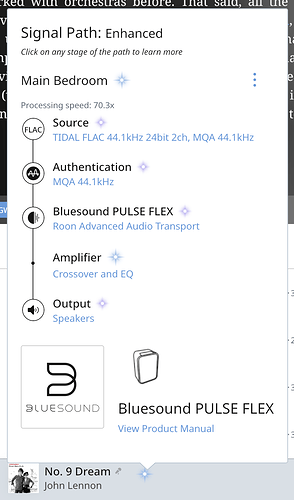 I suggest you experiment with the Bluesound; I prefer max PCM (power of 2) with my Pulse Flex. I also find that placement affects the Flex considerably and it needs a solid base. There’s a parametric EQ filter in Roon’s DSP settings.

Ok, I have set up all the bluesounds to be render only. The Meridian is in some sort of “exclusive” mode that Roon picked, and I think is set up to do both. I may experiment with pulling it out of that mode.

Question, where do I find the setting for PCM (power of 2)? Thanks!

The Meridian is a USB DAC so Exclusive mode simply means Roon has exclusive control of the device so system sounds, browser etc. can’t control the device at the same time.

Power of 2 settings are under DSP for the zone. Click on the speaker and click on DSP. Upsampling is at the top of the DSP screen