Since last week I changed my core to a NUC running Ubuntu 16.04 . I’m trying to use a usb drive to store my music.
My NUC mounts the drive fine but I can’t seem to share that drive over the network (to add music to it from my mac). I’m unable to change the access rights of the drive to read and write. Even after a sudo nautilus command I can’t change ownership or access… The drive was formatted as exFat.

I’ve tested a few usb sticks as well but again I cannot change the permissions.
Also It seems I’m the owner of any drive that gets mounted… not root. Is that normal?

but I’d like to simplify my setup and only have a usb drive attached to the NUC. Obviously I need a way to add music to this drive but I’m failing to do just that

Did I mess something up? It must be possible to share drives…right?

Any help is much appreciated !

The drive was formatted as exFat.

I think that this is the issue. exFAT is a special beast and IIRC one has to pay a licensing fee to Microsoft to get full functionality. I think that a base linux install can read it, but not write it (I think).

Regardless, the FAT-based filesystems don’t have provisions for any sort of file ownership and aren’t the best option for something like this. Try reformatting the drive as ext4 and see if that improves things. I can’t remember for certain, but I think if it’s formatted ext4 the system won’t automatically mount it and you’ll either need to use the mount command or edit the fstab file with the appropriate info.

Have you configured a samba share for the mount-point?

Seeing that you mention Nautilus – I guess you’re running one of the desktop releases?

Any special reason? If the NUC is just for Roon, you could run Ubuntu Server with a lot less overhead.

I echo the ext4 remarks: if you switch your Core to Linux, you’ll do yourself a favour using ext4.

Hi Evan
Thanks for trying to help.

How does that work? The drive is mounted and I can access all files in nautilus.
I can also see the drive in osx finder but it has a no access sign…

No particular reason. i hoped it would be the easiest way as Linux is pretty daunting.
i used exFat after reading

Ditched the NAS, gone back to local storage Tinkering

exFAT is better than NTFS for read/write on Linux, and MacOS. Both have no troubles with reading, but writing is limited/experimental in NTFS on those operating systems.

perhaps I should wait for Roon core kit…

Haven’t used ubuntu desktop or server for some time but in order to share a drive/ folder on a Linux machine you need to have installed SAMBA and configured the folder as a shared folder. As you can see it from OSX I’m guessing SAMBA is already installed, otherwise I’ve no idea how it is showing up on your network. Have a read here: https://www.google.co.za/amp/s/www.maketecheasier.com/install-and-configure-samba-in-ubuntu-for-file-sharing/amp/

Do you need to mount the drive on your macOS machine locally? If not – go ext4 and share it over the network.

From (distant) memory, on Ubuntu Desktop Samba is already installed. I guess the are ways to share the drive from the GUI, but otherwise the guide @evand linked to should work fine.

No as long as I can write to the drive after going to connect to server in finder it’s fine. I just need to be able to add music to it over the network.

I’ll try to format a usb stick as ext4 and see if I can change the permissions.

Thanks Danny I’ll give ext4 a try with a usb stick and see if I can acces it over the network.

I’m running ubuntu only until I can move over to roon core kit.
Would formatting to ext4 give me any issues once I install your OS?

no issues. ext4 works fine there

Thanks @RBM , @AMP, @evand, @danny ext4 was the solution.
I’ve formatted the drive and am copying over everything.

I can only connect as a guest from finder as the drive needs a user and password (but I never set one).
So when I connect as guest and add music to the drive it seems Ubuntu does not set an owner or group and the folder has a locked icon attached to it.

Roon has no problem adding the file to it’s library but I hope this doesn’t cause issues later on? 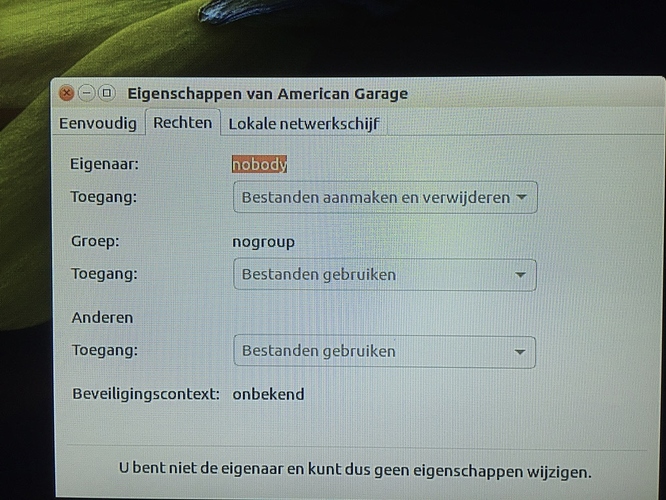 nobody and nogroup is a user and a group actually.

Thanks Daniel
Do you know how I can make myself the owner automatically when I add files to the drive?

You’ll need to add yourself to the samba user list:

thanks Rene !
I was now able to log in as myself instead of guest from finder. When I add a new file to the drive I’ll check the rights.