When I open an album with multiple dupe songs ( for example alac, mp3, etc) Roon plays the whole list dupes and all. see attached screen shot. I just want to play the “best” version. 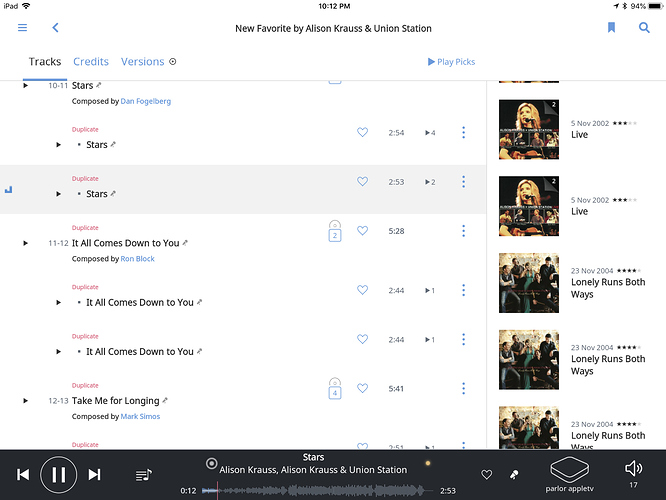 …an album with multiple dupe songs

Hi,
What do you mean by this exactly? Do you have the same album ripped to different formats sitting in the same album folder? If so, I think Roon cannot identify the album under those circumstances so will list all tracks together as one album, and behave exactly as you describe. I think this has happened to me a few times when importing older folders, but I just pulled out the individual formats into different folders so that Roon can identify each format album uniquely and list them as duplicates. It will generally then select the ‘best’ one to play by format quality/sample rate etc.

If your issue is not as described above then it is a job for @support .

Hey @davidwat — Thanks for reaching our and sharing your report with us!

So we can gain some additional insight into what you’re seeing, may I ask that you please verify the following:

Thanks for replying, Tony. Most of my music has been imported via various incarnations of iTunes over many years in many often duplicated formats including mp3, apple lossless and apple lossy. These have been amplified by my pointing at iTunes, Synology NAS backup, and Amazon dl folders. Getting rid of thousands of dupes is not a task I have time to tackle now.
Part of my problem is I don’t understand the algorithm by which Roon recognizes duplicate tracks and albums, and I don’t have enough confidence in 3rd party Macintosh dupe removers to pare down my collection to the single highest res version of each “song”.

“Can you share a screenshot of what this looks like in your storage location?” Sorry, is this what you mean?

Can you share a screenshot of the files themselves from the watched folder for one of these albums so I can see how these are stored?

Dylan, Sorry for the delay. Here is one of the watched folders - “Music”

Thanks for the screenshot, @davidwat!

Based on the way that the files are stored in the watched folders (i.e. there are files within the album folder) Roon is interpreting the tracks as multi-part compositions. Because of this, Roon is also not grouping albums in the “Versions” tab of the album. The grouping for versions is based partially on the track count for the album. If one version has more tracks than another, we do not count it as a duplicate version.

The best option for resolving these duplicate tracks is to move the duplicate files out of the album folders or, if you do not need them, delete them entirely.

Thx. It looks like I have a lot of work ahead of me. Does anyone know of a make duplicate file utility they have used and would trust to help in removing large numbers of dupes?

first of all it is important to stress that you need a backup of all your audio files before going any further. If you don’t have one at the moment, now is the best time to start!

I have used the following tool (mainly for jpgs) to good effect in the past. It is freeware but you get some extra features if you purchase. I strongly suggest you remove chunks of your library at a time from the watched folder and put them somewhere Roon can’t watch. Then run the tool against that folder only. That way you can keep an eye on what it is doing and control what is going on. Return that folders worth to the watched folder and start the next batch.

You can practice first on some deliberately duped audio files before moving onto the main library chunks. Backup those files now before proceeding…duplicate removal is permanent, there is no safety net if you (or the program) gets it wrong! Having said that, I think you can set the program to move rather than delete but not sure if that is only in the paid for version.

The issue with audio is that you may quite legitimately have duplicated files spread across different albums (if you have lots of compilations for example), and want to keep them, so watch out for that.