Help with consolidating files onto the SSD in my Nucleus+ server

I still wish to consolidate all of my music files onto the Samsung 8TB SSD that I installed in my Nucleus+ server. This would involve importing over 125,000 songs from two existing servers on my Ethernet based home network. I need detailed help in doing so as my attempts to date have not worked and I must be missing something or misunderstanding how to do so.

My previous attempts to use the Windows drag & drop feature to import my music files were unsuccessful, quite likely for a number of reason including:

So following the instructions on importing music to internal storage, in the article entitled “Nucleus Internal Storage” from the Roon Labs Help Center, I decided to try to import my music files using SMB Connection (Alternate Option). Because I had issues connecting, this article pointed me to an additional article entitled "Trouble connecting to ROCK/Nucleus data folder from Windows. I followed the instructions in this article and went into Windows Features and turned on “SMB 1.0/CIFS File Sharing Support”. What shows up in Windows 11 Explorer is in the attached screenshot.

Can someone please give me detailed step by step instructions as to how to import my music files into the Samsung 8 TB SSD on my Nucleus+ server?

The Windows File Explorer screenshot looks fine, you should be able to copy the music files into this. Can you not? What happens if you try?

What is the problem exactly? Despite your detailed description, I don’t get this:

So following the instructions on importing music to internal storage, in the article entitled “Nucleus Internal Storage” from the Roon Labs Help Center, I decided to try to import my music files using SMB Connection (Alternate Option). Because I had issues connecting,

That’s the correct instructions, and results in the File Explorer window from your screenshot. You shouldn’t normally have to enable the SMB1 stuff. [Edit: Well, I see several older threads where enabling SMB1 helped, but clearly not everyone has to, or the forum would be full of it. I am surprised as I would have thought that RoonOS supports higher SMB versions. Weird and I am confused, but in any case it should work if you do enable SMB1]

What issues connecting did you have? Was there an error message?

Does the File Explorer screenshot look like this only after you enabled SMB1? And can you not drag some files into it?

I would suggest start by reviewing this.

And, make sure you have a good database backup before doing the copying, just in case.

Regarding how to import music files into my Samsung 8TB SSD that I installed into my Nucleus+ server, attached is a screen shot of what is in my server. This question may sound elementary to many of you but which of the folders is my destination folder for the Samsung 8TB SSD to copy the music to? I have already run into trouble by mistakenly transferring music to the original SSD that came with the Nucleus+ & filling it up so that Roon would not connect. 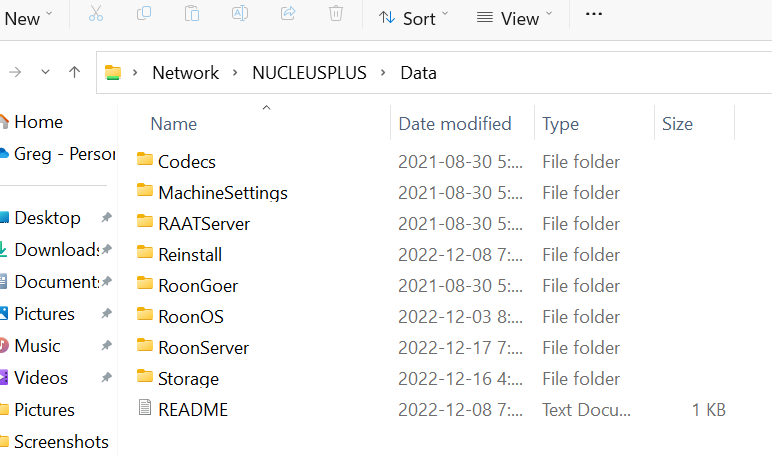 This question may sound elementary to many of you but which of the folders is my destination folder for the Samsung 8TB SSD to copy the music to?

The one that the documentation at https://help.roonlabs.com/portal/en/kb/articles/nucleus-internal-storage tells you to use:

I finally figured out (which is not clear in the instructions) that when I enter \NUCLEUSPLUS\Data\Storage\InternalStorage into Windows 11 Explorer, I
I can “drill down” into various computer screens as follows:

I take it that Internal Storage is actually my Samsung 8 TB SSD.

If I wish to transfer in excess of 50,000 songs from my NAD M50.2 server (information attached) to my Samsung 8 TB SSD, in my Nucleus+, how do I do it? Do I drag & drop the entire NAD music folder or do I drag & drop individual the songs & do I drag & drop them to “Internal Storage” on my Nucleus+? I know previous advice from the Roon Community was to try to drag & drop smaller numbers of music files, but is there something different about using the SMB connection(Alternate Option) that will allow me to drag & drop my entire music folder?
![Screenshot_20221219_043028|651x304] (upload://s3MH4e55mDoDNqEaExf2RJJAVil.png) 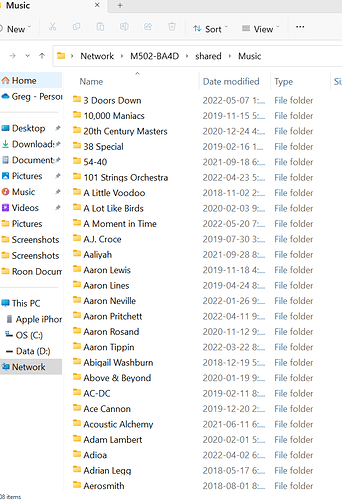 Yes, this is how nested folders work on computers, I wasn’t aware that this was the misunderstanding. But you figured it out.

I would copy, at least at first, album per album individually, i.e. one album’s folder with all the tracks in it. I would first create an empty folder with the artist name on the Nucleus storage, then copy one album of this artist into it.

If you copy individual tracks, Roon will not be able to recognize the album easily. If you copy more than one album at once, it is difficult to see if problems occurred.

When you are satisfied that it works reliably, you can copy more at once.

Just make sure you turn off RoonServer or Disable your current storage location before any copying is done to prevent RoonServer from seeing two copies of the same file.

You would copy/paste the files to a similar directory

Keep in mind if the music is on the NAD and you are using a PC to do the copy/paste the files routes through the PC in going from the NAD to the Nucelus.

I appreciate your quick response.

I have in excess of 8,000 albums, so copying them could be an immense chore, if I have to do it, album by album.

I am probably naive but what problems have occurred that make it advisable to copy only one or a few albums at a time? I used to use software that had a verification process in order to ensure that data were transferred accurately, but apparently there is no such verification possible, with Windows drag & drop of music files to a Roon server. I take it that if I wished to copy huge numbers a songs from a Samsung 8TB SSD on my Nucleus+, I would face this same problem of not being able to verify that this was done accurately. By the way the software used to rip CD’s onto my NAD M50.2 server, apparently uses a verification process of sorts, to ensure that the music data ripped are accurate & I understand that another ripping software also has such a process.

Do you know of any other way to copy my music from my existing servers to the Samsung 8 TB SSD on my Nucleus+ server that is accurate, easier and relatively problem free? If not, is the design of copying, verification and backing up of music files to and from a Nucleus server, not something that Roon designers should rethink?

The only reason that I would like to consolidate all of my songs onto a Samsung 8 TB SSD on my Nucleus+ server is because I have been advised by two audio experts that this could prevent performance problems with Roon; however if this is going to turn into a monumental task then I don’t think that it is worth it. If these performance problems occur, is this not a Roon design flaw?

In having made all of these comments, I do really appreciate how wonderful Roon is & how very few things are perfect in life for reasons often beyond my comprehension.

Any further comments that you may have would be appreciated.

I am probably naive but what problems have occurred that make it advisable to copy only one or a few albums at a time?

It’s not about verification of the correct bits transfer. That’s a solved problem in computing.

However, Roon has to identify the albums based on their tags and folder structure. Usually it works just fine, but there were many cases of users having some special or incorrect tag content, or organization structures that confused Roon. If you copy 8000 at once, it may be difficult to see if something goes wrong. That’s why I wrote to try with single albums at first, and then copy more (or all) at once when you are satisfied with the result.