Hi, been using Roon for years and never a problem until recently. I’m getting FPS lag in the Roon app so my mouse cursor stutters around the screen. Riva Tuner overlay is showing around 5 FPS.

Also having extreme difficulty getting anything to play on Tidal. My local files work just fine, but trying to play a Tidal album takes 20 seconds for it to start and then it buffers for 20 seconds after playing for a few seconds.

Any help would be greatly appreciated!

I suggest rebooting all the network equipment (modem, router, switches, …) and then the NAS that Roon Core is running on.

I’ve done that once but I’ll try it again.

What GPU is your device using? Are you using GSync or anything like that?

Regarding the TIDAL issue — Can you describe your networking setup? Is this happening for all zones, including System Output?

My networking setup is ethernet cable to an Orbi satellite. I’ve only ever ran one zone, but I set up another one for System Output and the problem persists. Everything about Tidal is slow… searching, pulling up an album, playing an album.

I changed some settings in NVIDIA Control panel and now get 20-30 FPS but still laggy Tidal playing. I’m constantly getting the “Tidal media is loading slowly” message. However, the Tidal app itself runs absolutely fine. It’s only playing Tidal through Roon that is not working.

an Orbi satellite is running over wifi … so this is probably where your issues are…if you can move your setup to the real router direct to the ISP then see how that goes. maybe a loooong lan cable would be OK to test if you have access to one. could also be DNS settings. Try adding 1.1.1.1 to your DNS server list.

what do you get on a speedtest.net or fast.com speed result?

I don’t think my network latency is a problem, every app runs smoking fast, my local Roon files stream with no delay, only Tidal over Roon is a complete laggy mess. 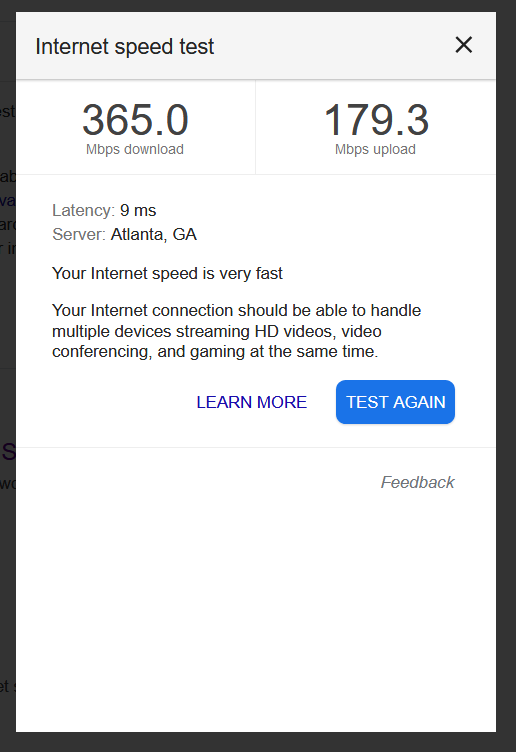 Also, I have an iPhone running Roon downstairs, and it streams Tidal just fine over WiFi. Tidal used to work just fine on this machine but for some now it’s hosed.

Tidal app is not the issue here its more likely how roon locates and communicates to tidal servers that is the what I am trying to guide you with here. the wifi orbs connection is looking OK so thats one thing ruled out…now DNS?

also roon on a NAS is subject to the performance of the NAS…what model of NAS is this. Most NAS cpu’s are not well equipped to run a Roon Core. As roon make updates to the core features this only puts higher demands on lesser spec’d systems like NAS’ so what worked yesterday might not in a subsequent update.

you haven’t stated what Roon versions you are running for the record yet either.

If you go to Settings > Services and choose TIDAL and then lower the streaming quality to Normal is there any change in your ability to stream?

Changing the Tidal streaming to Normal did not help. It takes around 10 seconds for anything to load once I select “Tidal” in the sidebar, it takes 10 seconds or longer to click an album and have it show up, and it takes 10-infinity seconds to play a track from Tidal (sometimes it just won’t go at all).

I haven’t messed with DNS yet… is this DNS on the router, the NAS, or my computer? If it’s the router, I can’t mess with that until tonight since my wife and I are working from home.

As @wizardofoz mentioned this will depend on a number of factors. A good place to start is likely with your Orbi router. Orbi has some information about changing DNS settings here:

Tonight I tried the following:

I am still having Tidal issues through Roon. On my MacBook, for instance, Tidal tracks won’t even play at all. They just sit buffering forever.

Anything else I can try? I’m at the point of not renewing my Roon license and looking for other solutions.

QNAP is double-ethernet to the base Orbi.

Please remove one of the two Ethernet wires and try again as it is very unlikely that the Orbi satellite supports any Ethernet link aggregation (802.3ad). You may also want to change the LAN settings on your NAS to accommodate for that change should you have previously configured it for link aggregation. If not: What’s the purpose for running two LAN cables to the satellite then?

This might be it! The Orbi 6 does support aggregation but I forgot to set it up when I switched from an older router. As a quick test, I removed one of the ethernet cables and rebooted everything and it appears to be working great. Will report back later today if that holds true.

Roon on latest updates on both computer and server (build 528).

Can’t play Tidal tracks. They will sometimes try to load for about 20 seconds and attempt to play part of the track, but then it stops. Had a previous ticket here: Help with laggy Roon interface and SLOW Tidal - HELP!

but the problem is back and worse than before. I’ve tried restarting all devices, including the entire network several times.

Roon tracks play perfectly with no delay or buffering. Tidal on this computer runs perfectly on Hifi/Master quality.