So there’s this Norwegian band called In Vain. Apparently, some band released an album under the same name. I want to hide that album. I noticed I can click on the new library icon, but that hides ALL tidal albums I have not added (eg: singles). Is there any way around this? 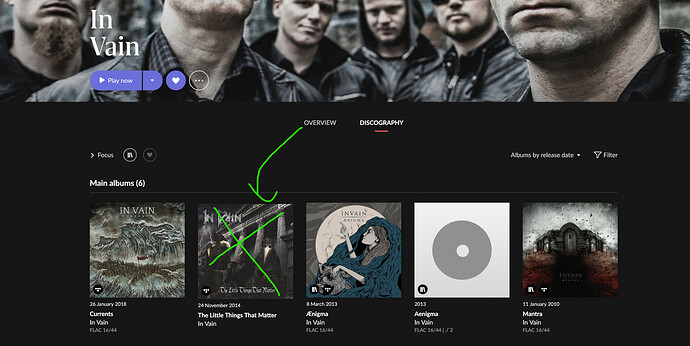 Discography is supposed to be an overview of all releases by a band, and as such not “hidable” by users.

In this case, you are talking about a Meta-data which the devs need to fix on the back end, ie. a band being mixed with the wrong band.

As such, I am moving this to Support: Metadata Issues so they can see it.

Oh, I see. Then this is a Tidal problem, because in Tidal, they don’t separate artists with the same name. I wonder if that can be fixed here? I guess that the best workaround would be to just add all albums/eps/etc from tidal to Library and then apply the library filter.