So here’s the problem:
I have a lot of old bootlegs and singles that I’ve accumulated when I was deejaying, and those won’t ever get proper metadata because there simply isn’t any. They clutter up my Roon library with a lot of generic albums that contains only one song and no proper metadata, and their respective album views are pretty useless since they hardy contain any information. 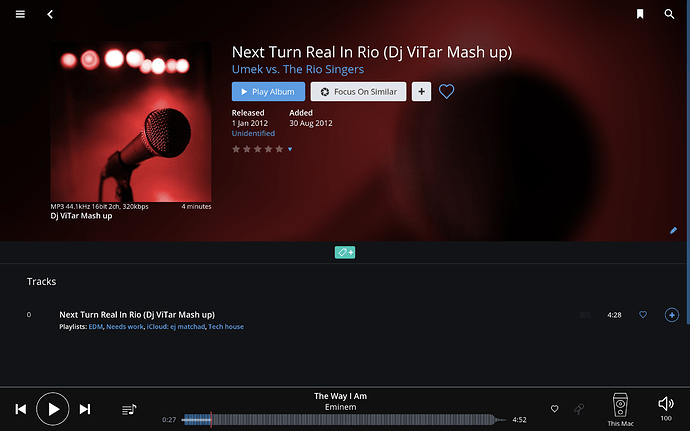 No meta, no fun

At first, I was about to skip these tracks altogether and start over with Roon, but I decided not to because I want to use Roon for all my music needs. Even if I don’t listen to them often, I want to keep them.

My feature request:
I would like a way to get these tracks out of the album view and into a simple list. Lists may be boring, but so is an album view without data. This would ensure a rich user experience where possible, and a stealthy approach where it’s not. Basically, I would like a Hide Album feature that only hides the actual album as a view mode, but not the tracks which still would show up in searches and the tracks view.

Interesting feature request. Can I suggest 2 other options meantime which might suit your requirements?

What I would probably do first is separate out the “singles” and “bootlegs” that you mention. For the singles, if they are actual releases (i.e. not bootlegs) then you can add your own proper metadata (some metadata just now, but more when Roon enables full metadata editing which should hopefully be coming soon). You can still group them together as per the below if you want, though you may not want to if you get the album covers and metadata for them - they would look good as they would then have the proper metadata.

For the bootlegs - particularly if they are single tracks as shown in your screenshot above - I would group them together into one (or a few, depending on numbers) albums. You could even have multiple-disc albums. You could call the album “Gabriel’s Greats” (or something), add your own cover art, and it would show as a single item in the album view - and all the tracks within would be searchable. This way, they wouldn’t “clutter up” your library but you would still have them there.

Alternatively you could tag them with a specific tag, and then have a focus bookmark which excludes that tag when you don’t want to see those albums. The focus feature is still a bit messy though so you may prefer the method above.

Thank you very much for those excellent suggestions. I will play around with them and try a few things out to see how it goes, but I agree those are workarounds that can probably suffice for the moment.

Bootlegged tracks cluttering up music libraries are by no means a problem exclusive to Roon, but they tend to stick out even more due to Roon’s heavy emphasis on metadata, and perhaps mostly because Roon has an additional drill-down level with its album view, I’m which bootlegs look especially painful when given so much space (as seen above).

Thanks a lot for the tip. Seems to work pretty well!

It’s all a bit violatile–it seems the album name changes to something else whenever I add a track by regrouping, but both my library and the album look much better. 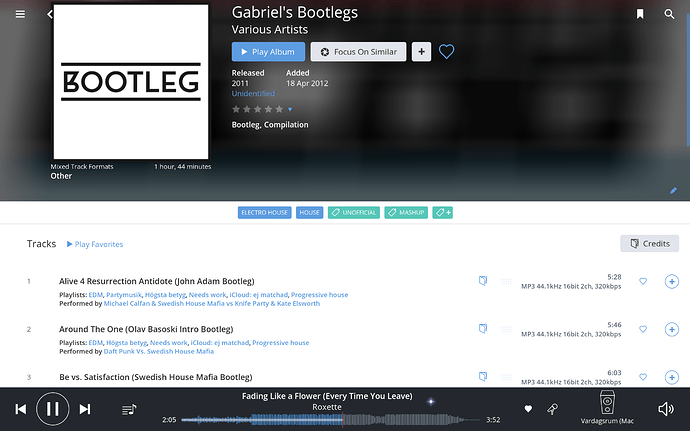