I have 3 filetypes in my library. FLAC, DSF and MP3. The first two are my main components of my library and MP3’s are for some collections and Greek music not available in other formats. I want to clean my library because I have a lot of duplicates.

The filter works excellent but there are a lot of duplicates so scrolling and examining is very time consuming. I have filtered out the MP3 and the DSF files because I want them. The problem is that the duplicate FLAC of the above albums show no matter what. I don’t want that. I only want the FLAC to clean.

I am not usre I understand your question correctly/completely, but I believe with Focus you can get there quite easily 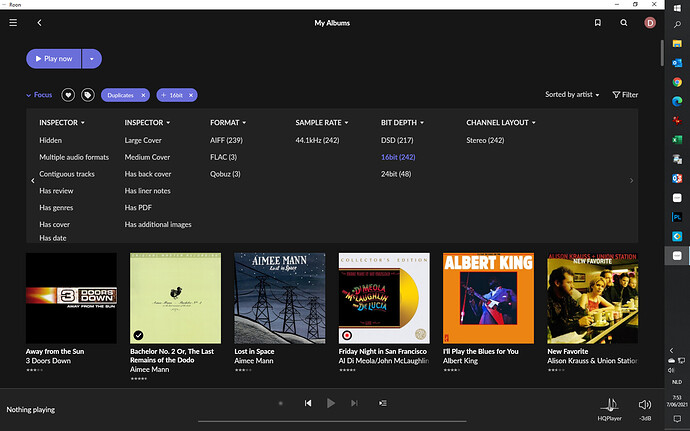 If that is not the issue you are faced with, can you maybe post a picture?
Dirk

You need to use Focus to get more specialized searches as Dirk has posted. Filtering won’t get you there on its own. Once you have created a focus for say flac you can then create a bookmark which can then be used there on in rather than creating focus each time. Bookmark save your focus criteria and auto update as you add files to your library so it will show those new ones as well.

A better explanation since I’m not a native English speaker. First screenshot my filters. Mp3 and dsd are out of selection because I want them no matter what. Second screenshot shows some albums. The album “balls to the wall” is indeed duplicate and it is shown because of the filters. But the album “25” from Adele is not duplicate because I have excluded dsf files from the focus criteria and it should not be there.

Maybe a stupid idea, but what if you convert the mp3s to FLAC (and just manually tag them as mp3 for your reference)? And as a bonus, SQ wise you have nothing to lose, nothing to gain…

Out of real interest, where did you get 25 in DSD from?

Ok, unfortunately this is a matter of definition.

In your case (if I understand you well) a duplicate album has all the same characterisctics, including the same format, e.g. flac and the same bandwidth and bitrate e.g. 44,1kHz/16-bit.

In Roon’s case, albums have duplicates: 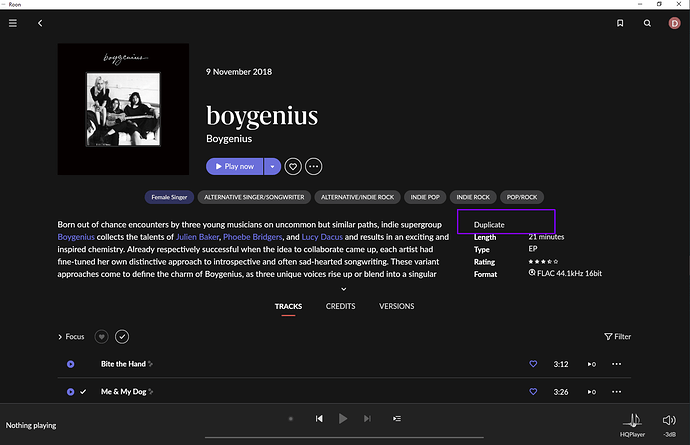 image1617×1043 142 KB
but one is apparently not able to get to that information to filter and select these albums.

So unfortunately, after focussing on duplicates (as you do already), you will have to go through each individual remaining album and remove the duplicate if you need to. (as far as I know at least)

Sorry for the bad news

As I understand it’s the second case. Two different types of the same album. And I can’t move the files because they are too big. I can’t move half a TB just to filter and then move back them.

And I can’t move the files because they are too big. I can’t move half a TB just to filter and then move back them.

Sorry, but I am afraid I am not really sure what you want to achieve and how you want to do it.
How many albums is Roon still showing when the focus criteria as in your picture?
Dirk

It’s still a duplicate as you have the flac version as well as the DSF file. Your not filtering out flac so it will show up.

That’s exactly the problem I’m trying to solve. At least in Foobar2000 I can create a filter to show only the FLAC and work through there. But the problem is much bigger there since some names have postfix like “UK pressing” or LP or something else. Then they are not grouped together and the hassle is much bigger.

I am still struggling to work out what it is you want to show. Are you wanting to show differnet release versions of albums as these are not classed as duplicates (unless you have two copies of them) or duplicates of any albums that doesnt have a DSF version?

I want to show only flac duplicates. Everything else to be hidden even if it has one Flac version. The Adele 25 is the perfect example. It’s Flac and dsd and it’s still there. Since my filters exclude dsd it shouldn’t be there.

In the case of this specific album, this album is defined as being the duplicate of your DSF album (which is the Primary).
If you would click on the Flac album, it will show you the text ‘Duplicate’ as I showed you earlier.
Therefore, as theFlac album is the Duplicate, it is imperative for Roon to show it here.

Now maybe there is kind of a workaround, that would do the job for 90% (or even more). 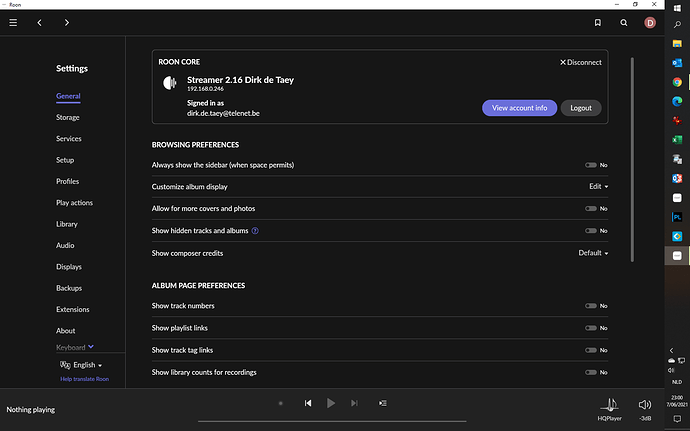 As explained before, Roon will automatically make the version with the highest bandwidth/bitrate as the Primary version (unless you manually overwrite it).
DSF is normally regarded as a ‘higher’ format than flac (or aiff), so your DSF albums will most probably all be the primary.
That means also that for your duplicate DSF and FLAC albums, in Album browser you will see the FLAC version only when you click on Versions.

You can (try to) benefit from that in the following way:
In Album browser, click on Focus - Inspector - Duplicates . Now click on Inspector - Hidden.
Your DSF files will disappear, as they are not hidden. Your ‘duplicate’ Flac files should show as they are hidden.

I do not know id this works flawlessly for 100%, but you will have a much better starting position.
Here an example from my Roon library, albeit in AIFF (as I am standardized on that iso Flac) 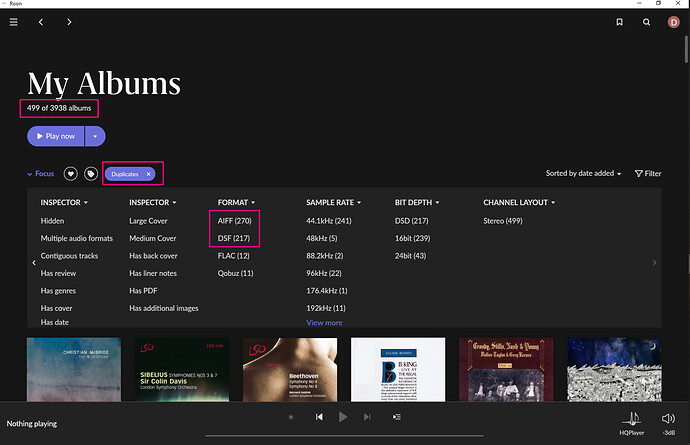 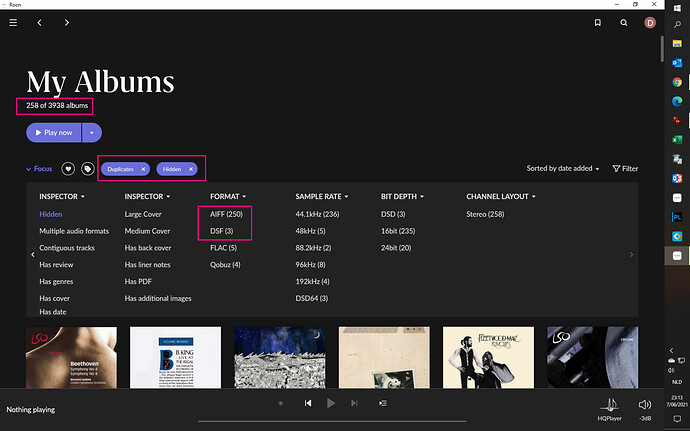 Hope this helps you somewhat.

They do not exclude it being a duplicate though. You have two versions of the same album one is flac one is DSF. Just filtering out DSF does not change its status it’s still a duplicate.

I fully agree, but I am still do not understand what the final goal is.
Does topic starter want to delete these duplicates, does he want theflac files to be the primary version,???
Dirk

Taking the OPs ask “I want to see only FLAC duplicates” literally, i take it to mean:

To my knowledge only if their metadata (eg title) are not identical. I would wager this is the case…

Focus will not work the way he wants. You would need another set of conditions on the duplicate side to determine this.

I have a couple of albums in different resolutions cd/hirez.
I have grouped them and they show in Versions? As it should. 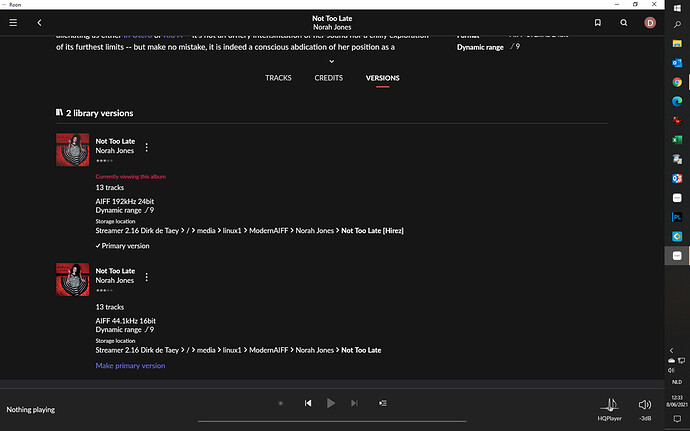 As I understand from your answers there is no way to achieve this. The two physical ways are to copy the files to another disk or make them hidden from windows explorer. But that’s exactly what I want to avoid. Extra stress to the disk.

Fortunately Roon does not mess with the Metadata and the disc is clean without much stress. If I start messing with the actual data I would risk their integrity.