I like using the queue to program my listening session and it works fairly well.

Where I see room for improvement is in having it hierarchical instead of flat.

As an example, in the picture below you see 2 albums. I’d like to swap the albums but I can only sort their tracks.

What my improved queue would look like?
It would consist of a 2 levels hierarchy. A node corresponding to the level originally used to send items to the queue and a second level the tracks.
Trivial case would be when you send tracks directly to the queue: in this case the queue would exactly look like now.

Hope you can consider this improvement! 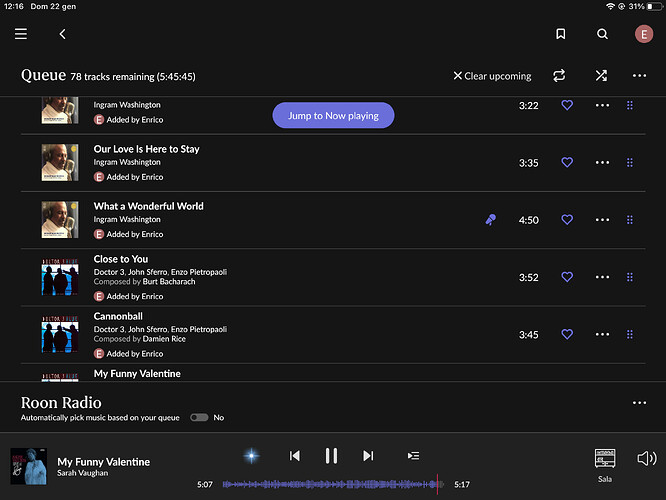 Where possible, I’d like to see the tracks grouped in my queue within the same 10 tracks each, now I only see the 20 tracks but not the 2 albums.

One could have a separate handle for an album in the queue, as I think was requested here, but another solution would be to enable drag handles for a multiselection of tracks in the queue (which could also be used for moving several tracks at once that didn’t come from one album), and a request for this is here:

Hi Roon When I play any one of my playlists on shuffle, I’m unable to re-order the tracks in the queue, The grab “handles” to re-order disappear when the queue is shuffled. I know it’s silly to want to manually order a shuffled list, but sometimes I see a handful of tracks further down the shuffled queue list, that I want to move up to ‘up next’. Just a minor request for the grab handles to stay at all times, even when the queue is shuffled

Thanks! Changed to feature suggestion!

super, I did vote

Out of votes but the is a great suggestion

The simplest suggestion of just being able to long-hold or right click to delete or select/drag an album from a queue (without having to select the tracks individually) seems the easiest option with the largest benefit.