My review of the Nucleus+

Interesting. You didn’t convince me my nuc in a fanless akasa case running rock at a fraction of the cost of a nucleus(+) wasn’t the right way to go. I even prefer the look of the akasa to the nucleus case. A pity you didnt compare but I guess that would have shown the extra cost of a nucleus was only in its plug and play capability.

I’m sure this only matters to a small fraction of users, but Nucleus also offers drivers to integrate with a Control4 system. Can’t get this any other way. It’s the main reason I’m saving up for a Nucleus.

@John_Scott1 Nice review, thanks. The plus gets a lot of attention, but I’d like to see a review of the base model for comparison.

“As a result of me inputting the distance from each speaker to my sitting room listening position and measuring the output of each speaker individually using a SPL meter app on my iPad, (there is a setting within the Roon software to mute each speaker channel and therefore allow it to be independently measured) the Nucleus+ carried out a simple speaker adjustment; increasing the gain of the left hand speaker by 1.1dB and introducing a tiny time delay of 0.29ms to the right hand speaker.”

Where are these settings in Roon?

Go to the DSP settings for the Zone you want to adjust. On the DSP Engine screen, click the “Add Filter” link on the bottom of the screen, and you’ll be able to add a Speaker Setup filter… 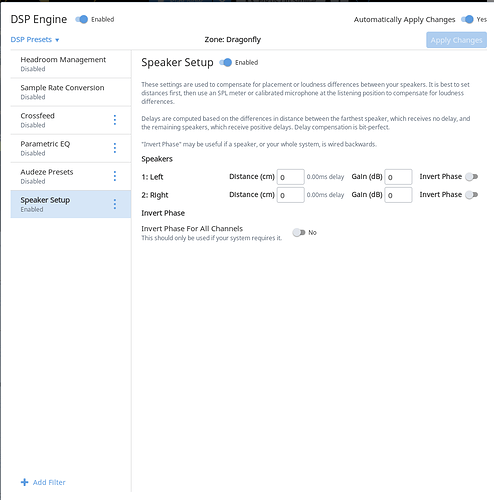 I currently run a Roon core on a 2013 MacPro. My endpoint is an MSB renderer module in an MSB DAC. I have no problems at all with Roon on my system.
I would love to get an SQ improvement for $2500, but given that I already have a good renderer, its just not clear to me that the Nucleus + will deliver that. Barring any DSP use, where exactly would the SQ improvement be coming from ?

where exactly would the SQ improvement be coming from ?

it was as if the Nucleus+ was lining up the little ones and zeros, straightening their clothes, wiping their cheeks with a hankie and giving them a pat on the head before sending them off to the DAC to do their best. …without enabling any of the Nucleus+’s DSP features, the soundstage was greatly enhanced, taking on a more three dimensional aspect and overall the music was simply more involving and exciting than before. … My brain still tells me that all the Nucleus+ is doing is moving a digital signal around my house but my ears tell me otherwise.

Of course, a Mac Pro is already a pretty hefty chunk of CPU power.

Yes, I read that in the review. I was thinking that my MacPro probably spiffs up those bits every bit as nicely as the Nucleus :).

That’s what I thought as well, until I listened to the Nucleus Plus…

My review of the Nucleus+

If it wasn’t for the Nucleus, I wouldn’t be part of the Roon family.

My pc tinkering days are long past, so the Nucleus strategy definitely worked for me.

Now, where is that Nucleus power supply

Gotta agree - for anyone using a PC/Mac/Laptop and you have the chance to audition a Nucleus with the same DAC of your choice, do so and draw your own conclusions.

What specific hardware changes to a standard NUC have been implemented in the nucleus? I admit I haven’t really delved into this topic.
Genuine question, what would facilitate the nucleus to be able to shuffle zeros and any better than my ssd equipped, fanless NUC fitted with an IFI DC power purifier?

what would facilitate the nucleus to be able to shuffle zeros and any better than my ssd equipped, fanless NUC fitted with an IFI DC power purifier?

Secret Room code that only goes into the Nucleus? Hard to imagine anything else would make a difference in the network packets.

Everything can make a difference.
I wasn’t posing my question from a position of scepticism as I have experienced how small tweaks can subjectively result in better sound in streaming devices.

Sure, everything can make a subjective difference. But real though it is, that’s in someone’s head and it differs from person to person and I’m not even sure it makes much sense to talk about it. And with marginal components, lots of unexpected things can make measurable differences, because they aren’t built right. But the only thing that could make a measurable difference (actually different network packets) between your NUC and a Nucleus would be different software. I’m not sure what hardware is in the Nucleus; could be different chips so different device drivers, as well as different Room code.

Sure, I agree with you. I’m just saying that since I’m not a therapist, my subjective reality is that it doesn’t make much sense to engage in conversations about someone else’s subjective reality. I get confused easily.

But it can make really good art. After all, most songs are objectifications of someone else’s subjective reality.

The only thing that might have been done is the use of a real time kernel in ROCK. Pure speculation on my part, but it might explain why so many insist Nucleus sounds better. The other option is expectation bias.