I’m using my Samsung HT-C5550 Home Cinema together with roon.
The system is from 2011 and the actual Blu-ray player does not support Blu-ray 3D.

When playing a audio CD directly into the Blu-ray player I can use volume 20 to get to a certain volume.

When doing lossless streaming of the same disk stored as ALAC and played through roon the volume increases.

I need to lower my volume from 20 to somewhere in the 15-17 range to match sound volume.

Trying to figure out what is happening.

Using the digital hdmi soundcard on my GPU.

Hi, I wonder if it is going though the OS’s audio mixer, can you check you have enabled exclusive mode.

Posting some screen shots of the audio set and signal path screens from Roon for that zone might help us spot if anything is amiss.

I hope you can see what you need and the link works:
https://1drv.ms/f/s!AtkCLbBCBnwRi_xaXHJq6v4MhCwIIA

It’s hard to track the signal path going from the internal drive to the speakers but the volume difference is there.

Am about to playback using my PS3, pretty much the same result as with the builtin cd player.

I havn’t tried my Xbox 360 yet. but I doubt that will cause a difference.

The problem is either a PC issue or everything works as intended.

I want to playback lossless to my amplifier at 100% volume and then adjust the volume at the amplifier.

From this screen shot that you shared: I can see that exclusive mode is selected and that the signal path is lossless, so your good with the Roon setup which is bit perfect. 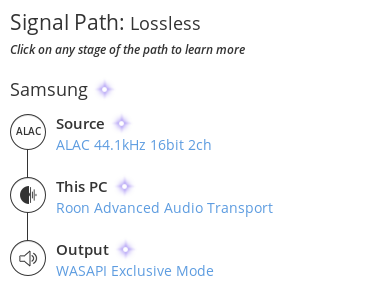 You can see what happens if the OS mixer is in the chain in this illustration I’ve just setup from my system: 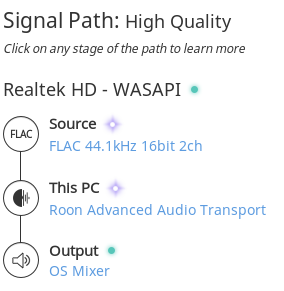 I’m not really sure why there is a volume difference, maybe the other signal path when you spin a CD is been attenuated for some reason. Does the Samsung HT-C5550 have per source gain adjustment?

As you are feeding a HT device, do you have any DTS albums both CD and ripped? I use them a double check for bit perfect transport … if the DTS signal reaches the decoder intact than it is recognised and decoded if not only white noise is heard.

I did a quick test where I placed a microphone and recorded both roon and the internal cd player.

There was a minimal difference.

So a measured difference of 1,2db.
Not a huge deal.

Could almost consider the difference placebo.

I’m glad to have measured as it gives another perspective.

Not sure where to go from here.
I probably lack the precision measurements.

Just shows how hard it is to compare audio in your brain as your can’t really tell much without a proper A/B listening setup.

As far as I know both setups use the same DAC with fed by roon or the internal CD player.

Hi Ulf, not familiar with the Samsung, but does your setup have input trim/boost similar to many AVRs? Similar concept to trimming / boosting speaker volumes, but specific to the selected input.

You may also try selecting Volume Leveling in Roon, which will reduce the volume delivery a bit. I use this feature since listening at night, I don’t want loud tracks to awake the MRS. You will find volume leveling in the Audio Setup /Zones.


but older as I bought it in like 2009. Main difference is wifi as well as 3D Blu-ray support.

When listening to music I use it as a 2.1 system and don’t do any pro logic 2 transformations.

It’s not high end HIFI but good enough in my ears to prefer HIFI quality on tidal or ripped CDs.

Recently spent quite a bit of money on Metallica flac to complement the gap in tidal.
My CD collection is pretty tiny but fills the role of complementing gaps in TIDAL.

It’s really hard to troubleshoot a all in one system as you know nothing about differences and how it is handled.
As sound travels to the amplifier through the HDMI cable I assume those bits will go through the integrated DAC in my system and have volume control applied on the analog signal.

The only analog connection is AUX as far as I can tell and there the computer is the DAC which is less than ideal.
Volume control is applied in the computer even in lossless mode on the analog output.
The amplifier receives the analog signal and you can yet again change the volume of the output of the system.

I don’t know the truth but I believe PC Blu-ray players is allowed to decode audio and send it as PCM to the amplifier without reducing the quality of the signal. It’s been quiet lately but I remember the first HDMI sound cards. Now it’s easy to transmit HDMI sound as long as the monitor is on at least because the graphics card is the sound card. Sound of non HDMI audio had to be downsampled to CD quality in the PC Blu-ray player.