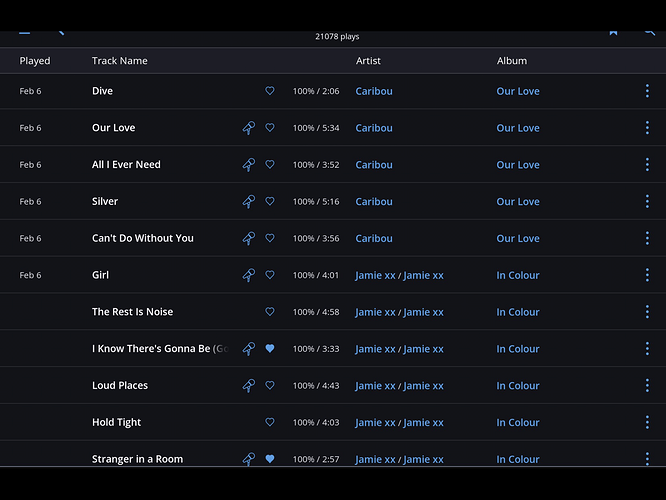 Yes, weirdly, I was looking for specific date range that far back…

I have a bug report being looked at currently of missing history.

I was looking at last night’s history to play some of them on a lazy Sunday but am finding a big gap in my history. I went from Brian Ferry’s in your mind to Dylanesque as shown in the last fm scrobble, but not in Roon History. [image] [image] I have often suspected an issue here with the odd track missing but this confirms my suspicion. Is this just me or a known issue, search didn’t reveal anything? SJB

Hopefully History will get a big revamp sooner rather than later.

@Sloop_John_B, we were able to reproduce your case, it is with the dev team

@hifi_swlon, can you give us more details here:

Restarted both. No dice. The history’s there past this date, the date just doesn’t display. The last visible date changes as the queue grows, so maybe a track limitation?

Weird bug. I can reproduce too, @hifi_swlon – thanks for the report.

We’ll get a ticket written up.

This is fixed for the next release guys. Thanks again for the report @hifi_swlon!

No problem. And that was quick!

But thanks really go to my little boy (while in the womb). I was trying to collate the main things we played for him before he joined us in the world. Will await the next release!