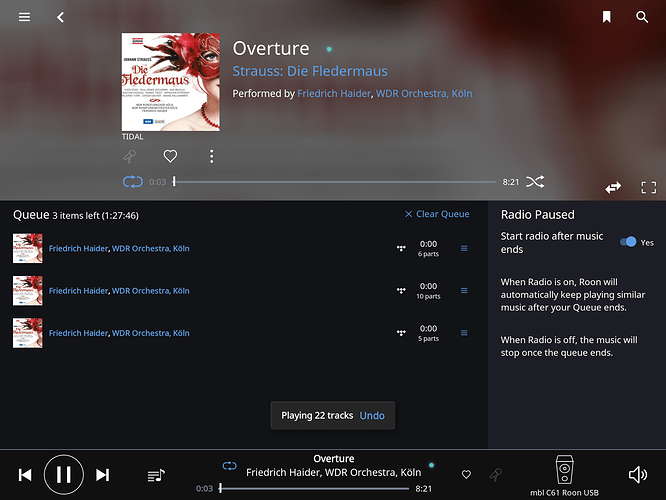 The screenshot is the Queue screen, showing Tracks to be played. To see the Tracks on the album, click on the name of the album in blue text, in this case “Strauss: Die Fledermaus”.

You may find the Roon User Guide helpful in navigating the UI.

Why isn’t it organised like in the picture below on the upper right side? 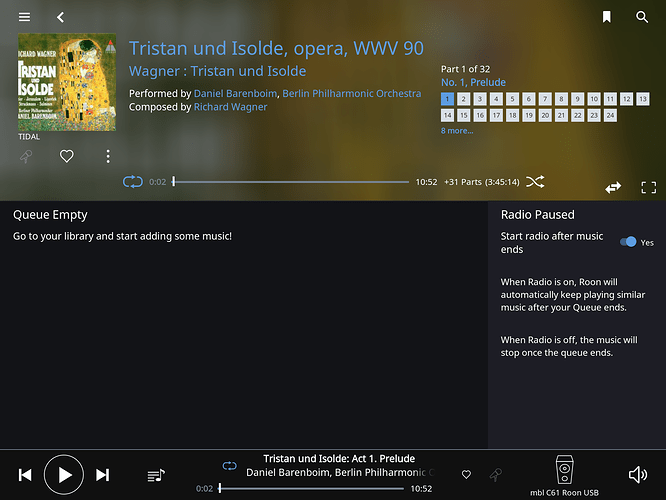 I don’t know the answer to that. Let’s flag @eric and see if he can explain or refer us on. I suspect it’s got something to do with how the Albums are recognised, which is receiving attention for Classical in 1.3.

When Roon has detailed metadata about an album, we can identify multi-part works and use this information to display the album with additional context and more accurate presentation.

This can only happen when Roon has information about not only the track titles but also about the composer of the work. Sometimes, we have even more detailed information (like the period it was composed in, or a description of the work and when it was composed), but like all things with metadata, this is dependent on the quality of the data we get from our various providers.

In the two examples you’ve provided @Michael_Kulig, it looks like we have detailed information about Daniel Barenboim and the Berlin Philharmonic’s performance of Wagner’s Tristan und Isolde, but significantly less data about the release in your first screenshot. Frustratingly, in this case Roon hasn’t identified Strauss as the composer for this performance

Roon is designed to provide a rich, expressive metadata framework for browsing your music – sometimes this means the data we automatically retrieve is incredibly detailed, and everything lines us just as you hope. Other times, the data falls short, and you won’t be able to take advantage of functionality like multi-part works. Of course you’ll still be able to browse to this album and play it, and in our upcoming 1.3 release, you’ll be able to add composer information as well. Manual editing of multi-part works is also something we’d like to include further down the line.

Hope that helps, but let me know if you have additional questions @Michael_Kulig!

According to Allmusic the Fledermaus release is indeed in the database:


It has date and venue of performance and everything.

I suspect @Michael_Kulig needs to manually identify the album to solve the problem. Michael, do you need help with that?