How do I edit or change classical composers

ROON is fantastic but it is probably so fine tuned that a lot of the classical composers are not the right one who composed the classical piece. This is very annoying if you have over 4000 cd’s of which 50% seem to be wrongly dedicated. I tried everything but where can I change the composers name? Metadata keeps offering the wrong composer and I seems I can’t change it… hopefully there is a way cause Bach did not compose a requiem in late 1800…
Birgit

Hello @Birgit_Jaarsma . The 3 dot > edit screens can fix these errors. See this KB article on editing.

However, it is often better to address the problem at source - Roon obtains its metadata from Allmusic and others and the error may well lie there.

You may want to consider posting the odd bad album in #support:metadata-issues but it seems you have 2000 bad albums which is very high. Are they streamed or local? How have they been tagged?

Dear Brian,
Thanks for your quick answer. They are stored on an Innuos Zen MK II local server. They are not tagged…… would that solve the problem? I find the Valence algorithm and metadata in Roon not so well functioning for my large classical collection since the update to 1.8…. Before this update everything was well catalogued….
Birgit

Roon is very opinionated about its metadata. Early on, when the metadata was much worse, I made the decision to tag COMPOSERs, WORKs, and PARTs with the use of a third-party tagging app (Yate for Mac). Lotsa work.

If that does not suit you, try this: for each album error displayed, use user tags to enter corrections. If Roon’s display does not still change, try “unidentifying” the album.

As @BrianW says, 2000 albums with bad metadata out of 4000 albums seems very high. If Roon is able to identify an album, it is rare for an error in the classical composer to be made, at least in my experience. In my collection, there are around 50 albums that Roon has not been able to identify, for which I had to provide metadata (including the composer tag) for Roon.

Is it possible for you to provide screenshots of the Album details page for a couple of examples? This may give a clue as to what is going wrong for you.

Jumping in here with my own report on Roon’s handling of classical composers. In general it’s a mish-mash. This screenshot shows what typically happens. The composer is sometimes listed in the album label (Tippett: A Child of Our Time) but sometimes in the line below (Bluebeard’s Castle [Ferencsik] / Bela Bartok) where the performer is usually shown. I try not to get upset about this, and have resisted the urge to somehow fix it. I’ll be curious to see what Birgit’s own experience is.

They are not tagged…… would that solve the problem?

Almost definitently, tagging your songs in the first place will solve the problem for those albums that Roon cannot identify, will help Roon identify more albums with the help of that extra metadata, and provide more metadata for albums that Roon can identify but only has limited information about (and this may not include the composer)

I have about 600 cd’s of Johann Sebastian Bach, but approximately 300 are dedicated to Johann Michael Bach. Since Sebastian Bach is my favorite composer I collect a lot of cd’s of his work in alle different recordings. It is very annoying that Roon mixes up my entire collection. 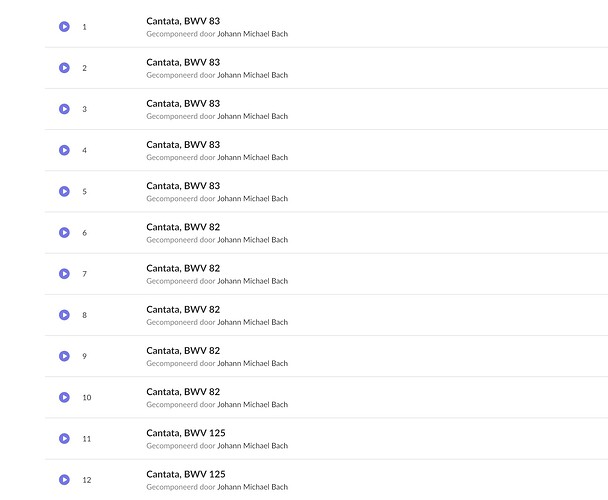 I too have many CDs of Sebastian Bach, including five performances of BWV 83 (which you showed as an example of a misidentified composer). All of mine are correctly identified as Johann Sebastian Bach. If it helps you track down the precise problem with your metadata for this particular recording - and if I have the same recording - I will be happy to dig further into my own metadata and compare to yours. Which recording did you screenshot showing “Gecomponeerd door Johann Michael Bach”?

Thanks Steven…and what great composer Bach is!! I showed the cantata recordings of John Eliot Gardiner, the box with the people faces on them. Approximately 10 of the box are identified as composed bij Johann Sebastian, but the other 30 are dedicated to Johann Michael… who wished he had composed them… for some reason a lot of my CD collection of Johann Sebastian (240 cd’s) is dedicated to Johann Michael. 240 of 500 CD’s…wich is so untrue and annoying…

Hi Birgit. Great, we are making progress: I have Gardiner’s BWV 83 recording from his Bach Cantata Pilgrimage 2000 (with wonderful portraits taken by Steve McCurry for the covers). As far as I can tell - and I am no expert - Gardiner recorded this cantata just once, in February 2000, and that’s the version included in the BCP2000 box set issued by the Monteverdi Choir and Orchestra’s own label, Soli Deo Gloria. I have many CDs from that set (which I love) but not this cantata. But I do have the same exact February 2000 recording issued on two other Archiv releases, as shown below.

All of this is simply to point out that Archiv and SDG very likely created their metadata independently. My discs, of course, show the Archiv metadata and it all looks fine to me. It would be really unfortunate if SDG created incorrect metadata but I have been shocked so many times by ridiculously wrong metadata from major companies that one more time wouldn’t astonish me.

Of course, none of these thoughts address your larger question: why do so many CDs in your collection show wrong metadata? Or did I misunderstand? Are all of the problems with this Gardiner box set?

Dear Steven… yes the recordings are marvelous especially cantata BWV 106! No the problems are not alone with this box but with 240 Bach cd’s… that are wrongly dedicated to Michael Bach instead of Sebastian… do you know how to change the metadata? unfortunately Roon doesn’t provide the possibility tho change composers by hand… that would make things soooo much easier.

But before getting overwhelmed let’s focus a little longer on BWV 83. From the screenshot you sent earlier, I can see that this CD also contains BWV 82 and 125. That corresponds exactly to disc 15 of the 22-disc set issued by DG/Archiv (see Product Family | BACH Gardiner Cantatas/Sacr.Masterpieces) before they withdrew their support for Gardiner’s BCP project.

I have this exact disc and the metadata is completely different from what your screenshot showed: 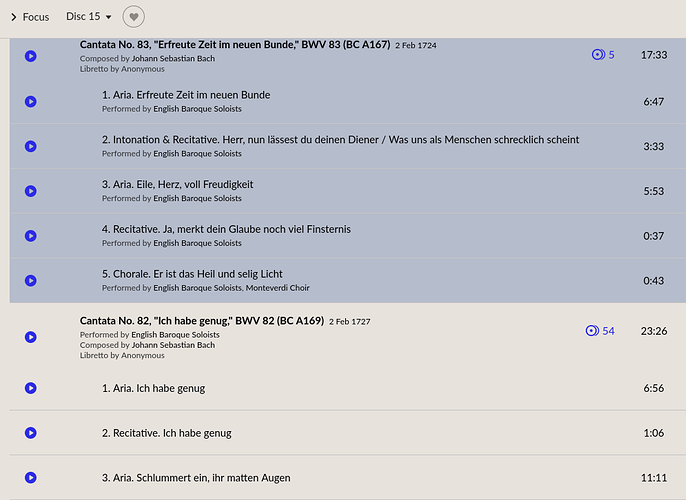 image997×726 71 KB
Your metadata seems, besides having the wrong Bach, to have very generic information (actually no information at all) about the individual movements. Perhaps we should first work on fixing your metadata for this single disc (I have a suggestion for this) before tackling the larger project of all 240 discs.

I have close to 300 CDs of Bach cantatas, including the complete sets by Harnoncourt/Leonhardt, Gardiner, Koopman, and Suzuki (I’m a bit obsessive when it comes to this repertoire!). Roon has generally (with a few exceptions) handled the metadata associated with these sets correctly. So, something seems amiss with the way your files are being read by Roon. Can you check your import settings under Settings>Library? Is it set to “Prefer Roon” or “Prefer File” for metadata preferences?

Also, you can change the composer credit for any album, but at the track level not the album level (since many albums, classical and otherwise, feature works by more than one composer). For any album, select all tracks, then in the new drop-down menu (at top left), select “edit” then “edit tracks.” From there you can subtract or add credits, including composer, for all the selected tracks for the album.

I can’t find BWV.83 on the pilgrimage set, which disc is it on ?

You say your server is Innuos, excuse my ignorance but did you rip the CD on this device and allow it to the metadata lookup ?

I am not sure how Innuos works , but my Eliot Gardner set looks fine

PS what format are your files WAV or FLAC, WAV has a much more limited metadata structure than FLAC.

SongKong may help you , the Bach set looks fine in MusicBrainz , it’s source.

Hi @Birgit_Jaarsma, let’s focus in on one album where this is a problem. Can you share a screenshot of the album? Is it identified in Roon?

How are you ripping these albums? Directly using Innuos? Are you seeing Johann Michael Bach credits in the File Tags outside of Roon?