How do I get a text-only interface that respects MY labeling?

Try Composer View and select your Composer as a start then use the Filter Funnel to filter by Symphony. This will work if your Target is in your library rather than in a Streaming Service

Or Select Composition view and enter your Composer Surname in the . This will work for both Local and Streamed sources 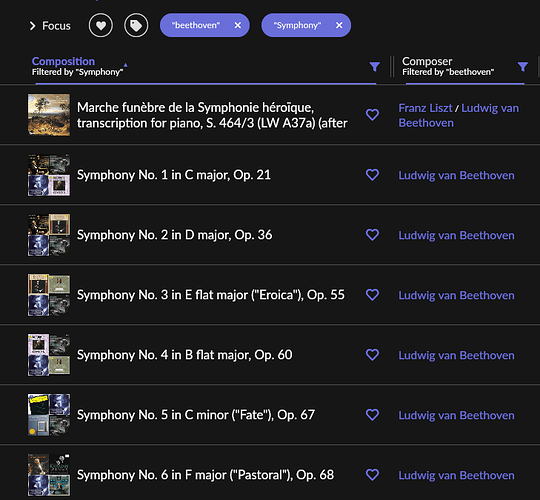 Perhaps Beethoven is too simplistic but worth a try with you favourite Composer, I have no Lundquist in my library.

That helped a lot Mike. Now if I only knew the names of all my composers…
The folder view is sooo much easier.

I put off getting Roon, because before the last iteration, it was totally unsuited for classical music. Now it is only kinda unsuited.

What is the usage case for Roon?

Can you put a Custom Tag as Composer then split the Artist tag at the Comma to get the First Name and Last Name , that would match Roon’s format

JRiver Expression language would that easily , even under a 30 day demo.

The syntax is really quite easy

Alas, there is no JRiver version for OpenSUSE.

It would be so easy for Roon to implement the additions I suggest.

Mike you deserve a medal

for your patience and constructive input in this thread.

From your kindness and knowledge ( but also your name) I’m presuming that you have some smattering of Irish blood flowing in your veins?

Just a little bit , both Great Grand parents were Irish , my parents were both English. I was born in Hyde near Manchester but I suspect there is a bit of Irish lurking .

Alas easy it may be (who knows how complex software additions are in code that you cannot see !) but the folder view is totally alien to Roon’s design philosophy.

There are 2 things @danny is adamant about , DLNA support and Folder View

Going there is a complete waste of this forums space !!

What IS Roon’s design philosophy? To make it hard to find an album??

To make it hard to find an album??

You forgot to add “my way” to that sentence…

I do understand your frustrations, and would sometimes even appreciate folder browsing myself, but you’re wasting your breath in light of Roon’s stance regarding that question!

Look for replies by @danny , there are a few where he explains in great detail why these 2 features will never happen

Roon is basically Album based , if you insist on changing Album names from that given by the Record Label and adding Composer in a non logical tag then don’t expect any software to identify the Album and its Metadata, it’s not just Roon that would struggle.

To a great extent Roon’s ability to search is based on its ability to identify a recording.

“ I think I’ll look for a street map of London but before I do that I will rename all my references to be Manchester funny I keep getting a map of Manchester, I wonder why ?”

Is it any wonder you’re struggling.

I have suggested 2 valid methods of navigation to Compositions as these are probably unaltered , find albums that have “random” album names I have no solution for.

Sorry if I can’t be of further help. With your personalised tagging scheme it would seem Roon is not the product for you

What IS Roon’s design philosophy? To make it hard to find an album??

James, you have had some very helpful suggestions from @Mike_O_Neill on how you might search along with very tactful explanations of what the problem is. Unfortunately changing the default metadata tags to suit your own circumstances is the cause of the problems you are now experiencing.

Roon’s design philosophy was stated from “day one” but your research was insufficient and resulted in your subscription to software that doesn’t meet your needs. The fact that you have amended standard metadata to suit your own needs means you’re unlikely to find any software package that will do what you want without a significant level of compromise on your part.

To cut to the chase, It’s not Roon’s fault or design philosophy that causes you to be in the situation you find yourself.

Good luck with your quest.

For Pop albums, album titles make sense. But for classical music, one wants the title to list the pieces on the album. For example, YoYo Ma has an album “Six Evolutions”. I cannot remember that. I would rename it “Six Cello Suites” filed under Bach. Titles on Classical albums are whimsical at best, and unrememberable always.

I have actually tried almost every streaming software, and none are really good. I have 3 Logitech Transporters, but their DACs are ancient and only support up to 24/96. But the interface is good. I use it in my Bedroom. It does not connect to my new DCS Bartok.

I have Emby installed, and it also has a great interface, but again will not use the Bartok as an endpoint. I use it when walking from my phone.

DCS Mosaic is the “approved” Bartok software, but it uses DLNA, and will not accept m4a files.

So I am stuck with Roon. It needs to be more responsive to classical music fans.

So I am stuck with Roon. It needs to be more responsive to classical music fans.

If you believe this then raise a feature request to support your individual specific tagging scheme. If there are other people that do it in the exact same way they may vote on it.

Not wishing to labour the point, Roon has been responsive to Classical needs especially in the 1.9 release.

But, a big but , is a level of standardisation of metadata, which by your own admission you do not have.

I have been vocal in the past on the shortfalls of Roon wrt Classical music but recent improvements have made great inroads. The only real outstanding item is to allow individual discs within a box set to be individually named along with associated artwork.

If you are “stuck with Roon”, which I don’t think is a bad thing , then my best advice is embrace a more standard format of metadata. There is a whole plethora of tools out there but I doubt your choice of a Linux OS would preclude many.

If M4a is your stumbling block to DLNA , there are many tools that can do conversions of M4a to something more acceptable like MP3 or FLAC. As I have mentioned JRiver would handle both the metadata standardisation and Conversion

I thought it was a good response

Thanks, I thought your reply was more tactful.

Many years writing the Queen’s English , a Classical education

So, I Browsed Albums, filtered by composer (Chavez) and clicked the 3 dots next to name, and selected “View Albums in my Library”, and get the following: 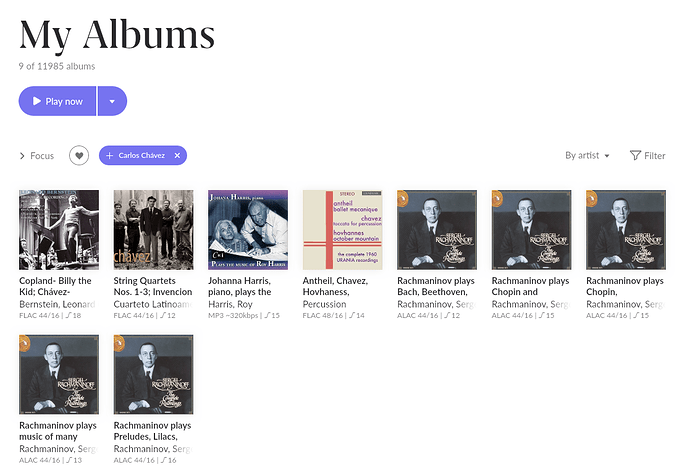 But only 3 of these actually have any Chavez tracks on them. So doing it the Roon way does not work very well.

So doing it the Roon way does not work very well.

Probably because your way of doing things is confusing the hell out of Roon.

You’re marching to the beat of a different drum. And that’s fine - just don’t expect the other 250,000 marchers to listen to it.

Go to an odd album and see where it is ?