How do I set max sample rate to 96kHz [Solved]

Hi, probably (undoubtedly) a stupid question but I do not see where to set max sample rate (with 1x, 2x, 4x) etc. My specific problem is I have some 192kHz files that I want to play at 96kHz. I am running roon on a mac mini which appears to support 192kHz but my aging (and raging if the auto correct is to be believed) meridian speakers will only take 96kHz. If I change the output settings in audio-midi settings on the mac all is well, until roon resets again when another problem track arrives. I’ve read the posts around May/June when the feature was being added/discussed but I simply cannot see where the settings are. My audio settings panel allows only device selection, and within each of those options the resync delay - no other options. Does roon just say “we can do 192kHz on this mac so this guy doesn’t need the setting to appear”? or am I blind as a bat? or both? or worse?

Not an answer to the exact question, but Meridian Sooloos endpoints automatically down sample to 96K. Thoughts, Chris

Not true @Chrislayeruk: the Sooloos core does the downsampling and sends 96k (or 88k) to the endpoint, as does the Roon server.

You should be able to set a maximum sample rate here: 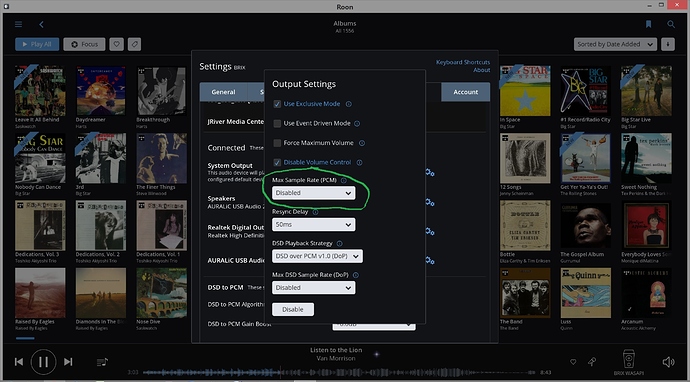 @Peter_Jackson: endpoints like Meridian Sooloos are taken care of automatically, but as @andybob has just posted, for other endpoints (e.g. USB or local devices) there are a fair number of controls.

Are you connecting your Mac directly to your speakers via spdif or do you have a MS200/600 inbetween?

If the latter it is already taken care of.

If the former then what DSP do you run? Latest SE models just got new firmware that might take the higher res signals ( according to the release notes at least).

Latest SE models just got new firmware that might take the higher res signals ( according to the release notes at least).

That would be nice, but I reckon it’s only >96k via MQA encapsulation (transmitted to the speakers at 96k).

I tend to agree Joel hence the word ‘might’. Still much to find out how hi-res (4x) will work in the M Eco-system.

Agreed, and in particular how Roon might do it…

Thanks for that everyone.

I am glad you enjoyed the films, but unfortunately (for myself) there seems to have been a royalty payment mix-up and as a result I haven’t yet got the new SE speakers, or even a media core.

But your image was very helpful. The error of my ways was not having “use exclusive mode” checked. Once I did that the other options appeared.