How do you use Bookmarks?

So, how do you create a Bookmark of only Late Night Tales albums?

I tagged mine. I did try focussing on Label, but the label info isn’t consistent from one album to the next.

I use a single Classical bookmark, because I can always toggle it to Non-Classical.

Yes., that certainly works. I included my “non-classical” bookmark really from an obsessive sense of completeness.

Incidentally, as someone else mentioned, I never discovered the ability to toggle a “Focus” by clicking on it until I saw it mentioned here on the forum some weeks ago. I very nearly posted asking how I could list “Unidentified” albums—then saw the trick.

Threads like this are really helpful to those of us still learning our way around Roon.

Would like to now the steps required to create a Hi Res focused bookmark? Am new to Roon, so still on a steep learning curve.

Would like to now the steps required to create a Hi Res focused bookmark?

Go to Album View and then select “Focus”. Scroll to the right if necessary and choose “Format” to select what you want to include as hi res. Once you’ve done that you can create a “Hik res” bookmark which will also pick up any new relevant albums you add.

I hope that helps.

Would like to now the steps required to create a Hi Res focused bookmark?

@Stephen_C suggested a good way to create a high res bookmark, but given there are quite a large number of high res formats it might be easier to specify the opposite of ‘low’ res instead. Select anything you consider to be not high res, then invert it (click the green ‘plus’). I’ve included 48kHz as low res below, but you could stick with just 44.1 if you prefer.

Most of my bookmarks are derived from Focus searches or Tags. My one gripe is that you can’t use folders to group them.

+1 , bookmarks hierarchical organization would be great. Current flat presentation is quite a limitation.

Yeah, I’d use them a lot more if I could nest them in some way - I really don’t fancy having to scroll through a very long list every time I want to use one.

That helped immensely. Thanks much!!

So, how do you create a Bookmark of only Late Night Tales albums?

Tagged manually as David Nightingale noted above. I searched “Late Night Tales”, imported into library and then added them to a tag. The Bookmark watches the tag.

Initially I tried both Label and selecting all the LTL albums from the search to import and tag, but the import function didn’t work across the selection. Possibly because some Albums were already in library. I think I could have tagged a selection, but this time I just added tags as I imported them.

I’d like to see Roon do better here as adding a Label or a Search to Tags shouldn’t be manual. I’ll do some experimenting with selections and see if I can frame a Feature Request.

you Tag a group of objects, and then you use a Bookmark to “preserve” a view of those Tagged objects

Excellent tip! Wouldn’t have figured that out.

apply Tags to Tags in order to create a sort of folder-like organization.

Excuse me for being dim but how do you do this? Would this allow me to create a sub-set of tags? I can see that being really useful.

So what and where is this “Toggle” everyone mysterious found? Also, on creating a focus bookmark, I wish I could “Not Include” as opposed to “Include” via a check mark. Or am I missing something? Just want to Include all artists in the focus except…

how do you do this? Would this allow me to create a sub-set of tags?

You actually do it like tagging anything else. Apply Tags to a Tag and yeah, if the Tag you are applying represents a subset, sure you have that subset. Then use bookmarks to record the view so you don’t have so many clicks to get back to it.

Thanks - that combines two sets of tags though right? So if I have 20 albums in one tag and then add another tag to it that say already has 10 albums under that tag we now have 30 albums in that first tag.

I think the answer is this isn’t possible under current functionality.

This is not easy. We’ve been asking for Boolean Tag combination logic for quite some time. It’s an area I feel is under-developed in Roon…therefore unfinished.

What you are asking for is Soundtrack AND Vinyl logic that finds the intersection of the two. Roon only offers OR as between tags, so it gives you Soundtrack OR Vinyl and will return the contents of EACH Tag rather than only the contents that have both Tags.

There is a workaround. For some odd reason, while Roon’s team did not implement AND logic, they did implement AND NOT logic. You can Tag all your non-vinyl albums as NotVinyl and then click on the + to make it a - in the Tag label in focus and then your logic is Soundtrack AND NOT NotVinyl and it will return the results you desire.

But that is a pain of a workaround. I’d rather continue to ask Roon for a proper solution.

Thanks so much - really appreciated.

I’ll definitely have a play around with the workaround but yeah hopefully the sort of functionality you describe will come to Roon soon(ish).

That’s how I do it. As I manually tag everything my genres are completely predictable and although not nearly as comprehensive as some here, it works for me. I simply focus on a genre and make a bookmark out of it. The finished product is shown below. My order starts with most listened to and goes down from there. 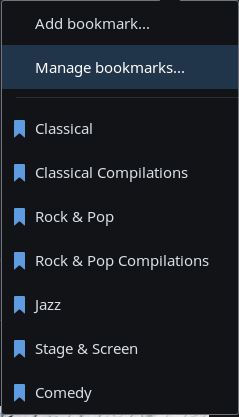 Remember you can Tag, Albums, Tracks, Artists, Composers and Compositions, and Other Tags under One master Tag.

A bit off topic, but it might not get more historic than this: 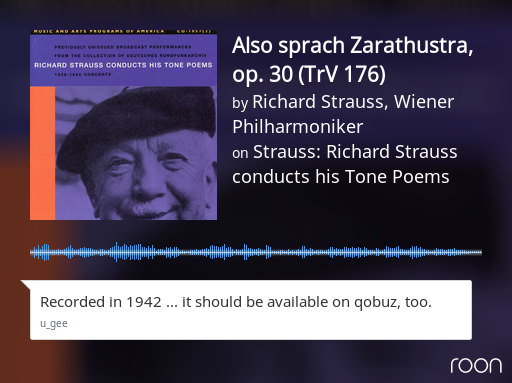