How does Roon 1.8 sort albums with the same release date in "Overview"?

Mac mini into a Lampizator Amber 2 via USB

I have several boxsets in my library which I have broken up into separate albums. Metadata contains the disc number so Roon identifies the albums perfectly.

For instance Neil Young Archives Vol. 2 is in my library as 10 separate albums, each with different cover art. I have named each disc so that they are in alphabetical order:

In Roon 1.7 these discs would appear in the right order in my library but since the update to 1.8 they are seemingly randomly mixed up when sorting by release date. 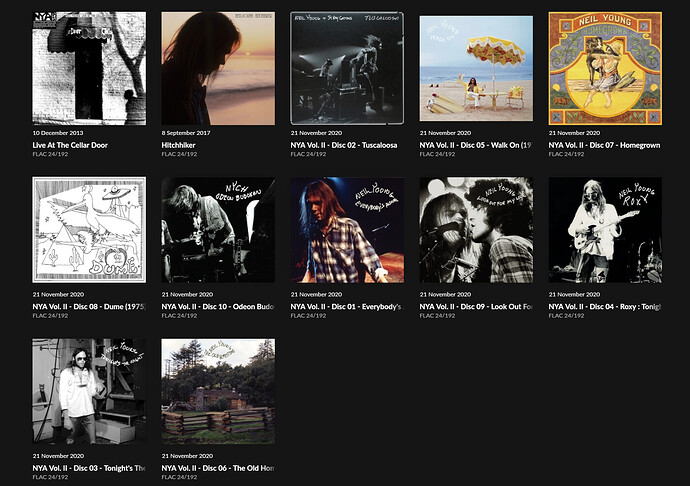 Which leads me to the question in the title of this topic.

I have tried several other titles for these particular discs (Disc 01 - Everybody’s Alone (1972-1973) - NYA Vol. II, for instance), but that did not make any difference.

Could it be that when sorting by release date in Overview, Roon does not “read” the album title anymore?

Hope there is a fix for this matter.

Thanks in advance and all the best.

Hi @support, any thoughts on this matter?
Thanks in advance and all the best,

In Roon 1.7 these discs would appear in the right order in my library but since the update to 1.8 they are seemingly randomly mixed up when sorting by release date.

So these were previously sorting alphabetically among albums with the same release date?

We can take a look, just want to confirm what you’re expecting here first. Thanks!

Yes that’s right. In 1.7 they were sorted alphabetically among albums with the same release date.

Thanks for looking into this!

Hi, @Martijn, thank you for you report we are tracking this one.

No, this one has not been fixed yet. Thanks for checking in!

Thanks for letting me know.

Hi @ivan, is this one still on the list to be fixed? Me and my OCD really hope so

Hi @ivan & @mike, just wondering if there’s an update regarding fixing this issue.

So I eagerly updated to build 805 hoping this issue would finally be resolved but unfortunately this is still not the case.

Any chance the next update will fix this and put the album titles in alphabetical order again like it used to be in 1.7?

Fixed in the latest release!