How far away can a Linear Power Supply be and still influence audio?

I bought a Linear Power Supply (LPS) for my Roon Nucleus and it can do double duty with my Netgear Nighthawk Router. But I am having major second thoughts because these two units, along with my Windows 10 desktop computer and audio system are in a spare bedroom remote from the other three music systems in the house. I’m worried the other music systems are too far away to be influenced by the LPS and I will have wasted my money. Especially since the audio system in this spare bedroom is seldom even listened to.

The schematic below represents the layout of The audio gear in this remote bedroom. Note the three lines out of the router which feed the other three audio systems which are considerably remote. Will that LPS be too far away to influence the three remote audio systems? 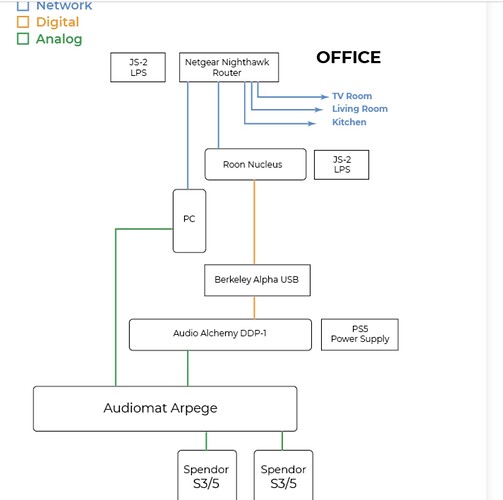 The main music system is in the living room and is the farthest away and there are two other music systems, also remote from that spare bedroom. All audio systems are Roon endpoints connected by Ethernet cables to the Netgear Nighthawk Router.

Am I right? Are the three other audio systems too far away to be benefited by the LPS in a remote bedroom??

Computers, like the nucleus, and routers will in general not benefit from using an LPS.
This is a very controversial statement as it is disputed and discussed all over this and other forums.
Electrically, long distances with low voltages and relative high currents cause voltage drop over longer distances thus not being efficient and maybe picking up noise and cause distortion on the way.

You have to try for yourself and hear if you benefit from the use of LPS in your intended application.

Thanks for your insight. I have been listening and not hearing any improvement, and this has inspired my question.

I would say you have answered your own question right there.

I had a phase where I thought EVERYTHING needed a LPS…

I now only use them for my gear simply because I already own a bunch of them in differing voltage’s.

Saying that I have a Chord Mojo connected now by an El Cheapo Chifi 5 v phone usb charger and skinniest cable I ever saw, sounds great to my ears.

But, but, but haven’t you got that nagging feeling that if you spent more money then it may improve? Surely it must, the advertising man said it would!

Are the three other audio systems too far away to be benefited by the LPS in a remote bedroom??

Whether or not the local system benefits, the other three systems are connected via Ethernet which provides galvanic isolation already. So, they would need their own LPS’s to gain any benefit, if any.

Are the three other audio systems too far away to be benefited by the LPS in a remote bedroom??

The sheer proximity of an LPS, by itself, does not provide any benefit or detriment to an audio system. It’s all about what you power with them. However, powering computers with an LPS – and both the Nucleus and the Nighthawk are computers – is, in the non-superstitious engineering world, thought to be pointless, as computers do their own power regulation on-board using switching power regulators.

I wish I had asked this question before I bought the JS-2. Fortunately, I am still within the return window. Thanks all, for this good information. And also for saving me a big chunk of money!