How Roon identifies multiple instances of the same track. A point of clarification

Does Roon differentiate between () vs [] vs {} brackets when ascertaining whether a track title is the same as another for the purposes of identifying instances of the same track (same composer of course) in a user’s library (regardless of performer of course)?

title: White Queen (As It Began)
composer: Brian May

title: White Queen (As It Began) [Live at the Rainbow, London, March 1974]
composer: Brian May

title: White Queen (As It Began) (Live at the Rainbow, London, March 1974)
composer: Brian May

title: White Queen [As It Began]
composer: Brian May

title: White Queen {As It Began}
composer: Brian May

@joel Which of these instances is Roon going to include in the composition count?

@dylan, perhaps you could provide some insight here? It’s a genuine enquiry - I have way, way too many instances of track title and composer matching with Roon not making the connection. If there’s a norm that Roon looks for I’ll happily format my track title tags accordingly, especially if it’s going to result in Roon making the link where albums are unidentified.

Please don’t tell me I needn’t do anything it’ll all self-heal in time - I’ve more years behind me than ahead of me and I want to explore and enjoy my music today, whilst I still can.

My guess:
The track MUST be an a album that has been identified!
I have multiple instances of tracks (same title, same composer) but when these tracks are on unindentifiend albums, roon does not count them.
You will find them with the Search Funktion

C’mon guys, it’s a simple question to help me to help Roon do what seeming doesn’t come naturally.

@support, I’d really like to get to the bottom of this:

All have the same artist, composer and title, yet the track in the first image isn’t treated as the same track. The only thing I can discern is the album on which the track appears is unidentified within Roon. Surely the fact that the track title and composer are the same and even the artist/performer are the same you have enough to go on to tie the tracks together? This simply isn’t good enough, nor is being ignored when asking questions to enable users to work around / compensate for Roon’s shortcomings. Roon can and should do better with it’s metadata matching. Just because you can’t tie a track to an album you can identify does not mean there is insufficient metadata to understand with absolute certainty, that based on the metadata, it’s the same track.

The track MUST be an album that has been identified!

I don’t think I’d go that far. I can add composer credits to a track on an unidentified album and the track becomes linked… 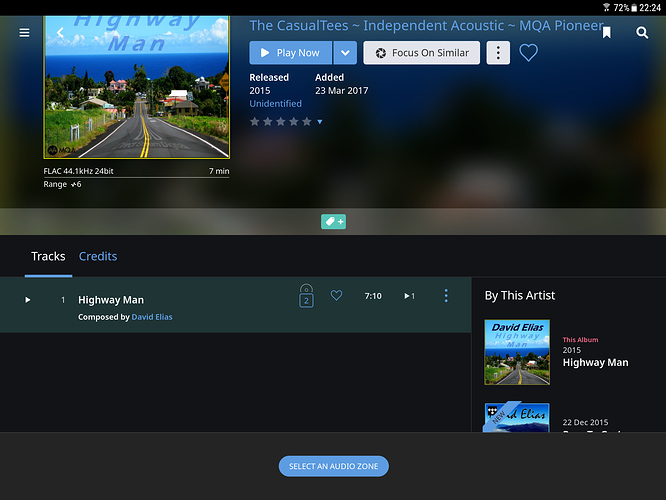 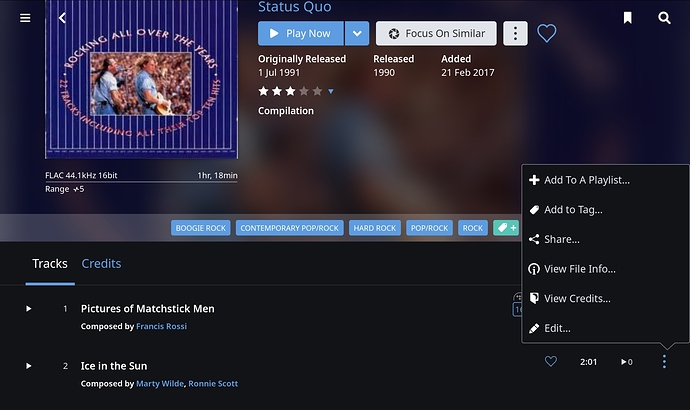 And I’ve had many instances where I’ve had to merge seemingly identical compositions.

I know Roon are looking to improve their metadata handling, see here for instance, and I’m prepared to wait for that; in the meantime, some guidance as to how to minimise our editing efforts would certainly be welcomed.

Are you doing it within Roon? I don’t want to edit metadata within Roon - the UI for it sucks and I refuse to enrich a localised database when the metadata is already in my file tags. Roon should simply be picking it up and matching it to the rest of the same in the database.

I suspect Roon’s relying on the presence of musicbrainz’ MBID to accept metadata where the album is unidentified and there’s thus no corresponding TiVo unique identifier. This would be how they’d avoid confusing two artists or composers with the same name. If this is the case I wish they’d just come out and tell us to run our libraries through a musicbrainz tagger to add the MBID’s instead of pretending we don’t need to bother with tagging because they’ve got an all singing all dancing solution and all the while remaining silent.

It seems every time someone asks a question to do with metadata it’s just ignored.

Not sure what you mean here?

Are you doing it within Roon?

In that instance, yes. Other times, no.

Not sure what you mean here?

Even though there is a composer for the track, there is no go to composition in the edit drop down. When this happens it seems to be because of the supplied metadata from Allmusic, but I wondered if your problem might be similar.

Even though there is a composer for the track, there is no go to composition in the edit drop down. When this happens it seems to be because of the supplied metadata from Allmusic, but I wondered if your problem might be similar.

Thanks @BrianW. I’ve just checked. In myu case I can go to composition, but it takes me to that single track, so it’s recognising the composition data, but being obtuse about the obvious in that it doesn’t link it to the other instances of the same composition. I’d have to conclude it’s a long outstanding bug in Roon’s base functionality.

@evand, searching through the fog of my memories, I now recall, and have checked, that the David Elias track I showed above did originally have a parenthetical extra - viz. “(Free MQA)”. It wasn’t until I had removed that (via Roon) that the link to the other track was made. So the track titles had to be identical. However, this isn’t always the case as can be seen with at least one of yours.

It would be nice to get a response to your original query at the beginning of the thread, but, just for fun, if you removed “[Original Master Remix]” from your troublesome track, would Roon link it?

I’m betting it would.

Brian (who’s not a betting man)

just for fun, if you removed “ [Original Master Remix] ” from your troublesome track, would Roon link it?

I’m betting it would.

Thanks, I’ll try it. It’d be interesting to see if it works and also whether or not the association (if made) remains if the tags are subsequently reverted to their current state. It it works it’s most definitely lazy thinking on Roon’s side because many of the affected tracks have the same metadata in TiVo / allmusic.

There are many hundreds of such troublesome tracks in my collection and in most cases the track titles are exactly as shown on allmusic.com (albeit in this instance musicbrainz is the source).