How to combine parts of composition

Roon has identified the following album for me: 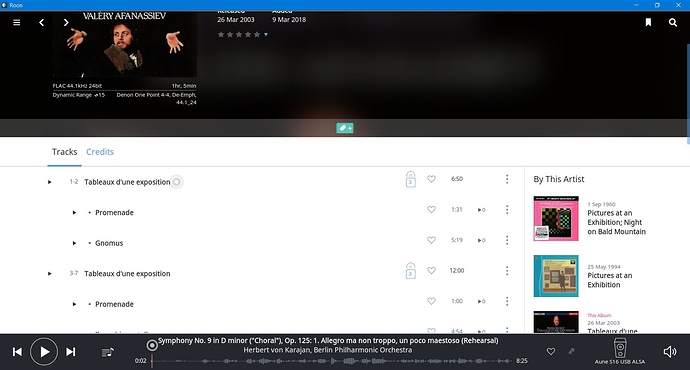 Sometimes you can get a better grouping of multi-part works by going to “three dots -> edit -> edit album -> multi-part composition grouping” and choosing an alternative.

But it don’t think so in this case. Despite “Pictures at an Exhibition” being such a famous work, roon handles it badly and there will be quite a bit of manual intervention.

a) Pictures at an Exhibition (Kartinki s vïstavski), for piano

b) Pictures at an Exhibition (Kartinki s vïstavski), for orchestra, orchestrated by Ravel

The use of unfamiliar “canononical” forms of even very famous works is common in roon. You can find them on allmusic.com

I like to group my performances separately for the piano and orchestrated versions. But you may just want to maintain one group.

Once you do that you will end up with a screen like the following with Pictures at an Exhibition linked to your other performances and grouped as you expect: 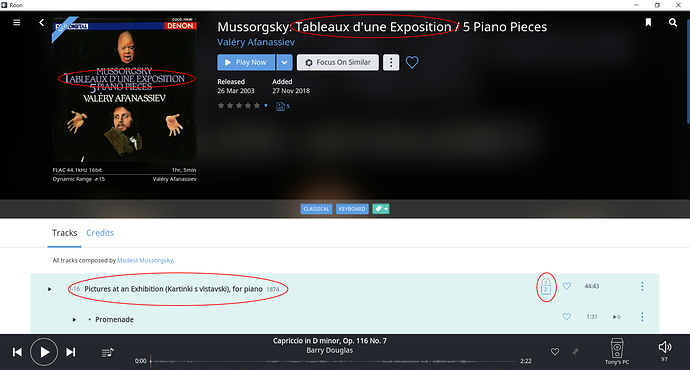 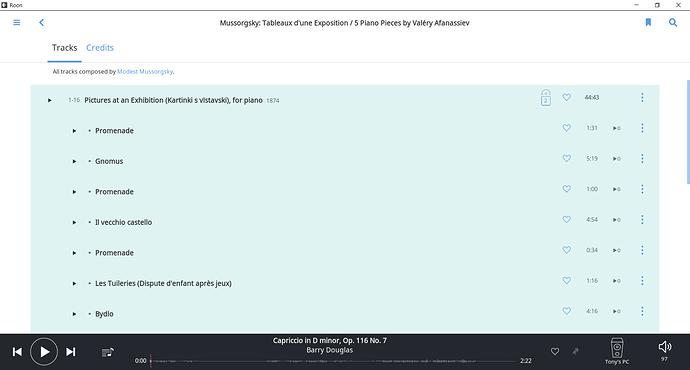 Personally I don’t think this is quite complete as there is now an obvious mismatch between the work title in several places on the screen. I have raised this issue several times with roon. Although it is possible to edit a single-part works so that all title match on all parts of the screen this is not possible with multi-part works.

Thanks a lot, Tony
Wow, what a comprehensive answer. The complexity of the inner workings of Roon don’t cease to amaze me. If it so difficult to get something right which is as simple as a work with 16 movements, in my view it is an indication, that something in the metadata model that Roon uses (taken from allmusic?) may be not quite right. I may be misinterpreting things, but I have read several posts in other threads saying that Roon is working on improving the metadata model.
I have played around with this album for a while, but always ended up deleting and reimporting it, as things got more and more screwed up.
Thanks a lot for your inputs though. Really appreciate them.

Pletnev’s version is identified without issues: 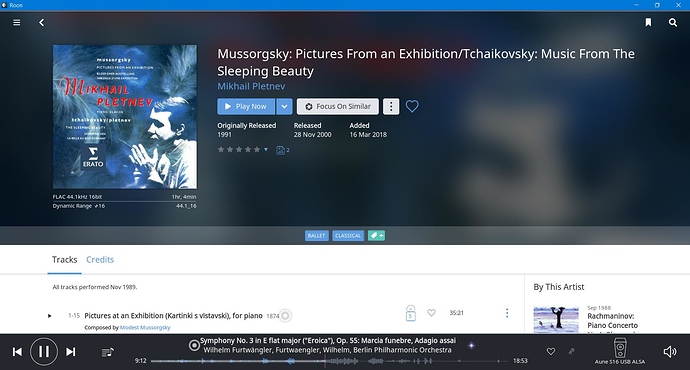 Pletnev.jpg1920×1030 152 KB
The issue seems to be that Afanassiev’s disc has 16 tracks, whereas Pletnev (and Roon’s reference) seems to have 15.
If the text at the beginning of track names is identical for a group of tracks, Roon usually displays this as a group of tracks belonging to a work, but this is not reliable either. If I go back to the file data in Afanassiev’s pictures, there are still two groups of 8 tracks, so no help there.
For the time being I’m just leaving things as they are.
joel November 27, 2018, 4:01pm #5

From your screenshot you have several other Pictures at an Exhibition

No, I think it’s just the three different sub-groupings with the same name in this album.

I think this has come up before. Unfortunately, the metadata we have for the album doesn’t have composition structure (or even explicitly keeps the tracks ungrouped on the grounds of it being an “incomplete performance” of the composition – which is often the case with Pictures). But we still attempt to derive composition structure from track titles. IIRC, it’s the fact that there are identical named parts called “Promenade” which causes Roon to treat the subsequent tracks as a different performance of the same composition.

I think there is a misunderstanding. I wasn’t referring to the 3 Afanassiev groupings. In the screenshot on the right hand side there are 3 distinct albums visible. In addition to the Afanassiev there is also the Malcolm Sargent orchestrated version:

And also the Ansermet orchestrated version I have several “Pictures at an Exhibition” at home so I cannot confirm precisely but from memory, my own personal experience is that “Pictures at an Exhibition” is often neither grouped or linked properly and requires quite a bit of manual intervention. I hadn’t realized that roon was already aware of this recurring issue. Are there any plans to address these sorts of composition exceptions? I find exceptions to typical composition naming and formatting conventions be quite common resulting in a lot of cut and paste from allmusic and manual intervention with 3rd party taggers.

I can’t seem to find the Afanassiev Pictures in allmusic at all.

The Sargent Pictures is grouped into three:

Ansermet is correctly grouped as 1 work with tracks 1-6

All three have Mussorgsky as Artist, that’s why they all appear in the screenshot.
Looks like something re. metadata display is not quite working as designed here.

IIRC, it’s the fact that there are identical named parts called “Promenade” which causes Roon to treat the subsequent tracks as a different performance of the same composition.

This was the case for me. As my album was a Tidal one, I didn`t have the freedom to play around with WORK/PART tags but I got round it by adding the tempo indications for the promenade sections into the track titles, e.g.
Pictures at an Exhibition: Promenade :Moderato comodo e con delicatezza

Because the promenade tracks are now different, Roon correctly grouped everything.

@brian. I tried that with several Pictures and roon did group correctly but it did not identify the composition correctly. I still had to use WORK/PART as this is a typical example in roon where the allmusic canonical names are very different to equivalents commonly used by the labels. So I am curious did you get a composition identification?

All seem to sort fine … confused

The Brendel one has bee Roon I’d Ed too

After a number of dead ends, I sort of cheated…
I found another performance which Roon had identified correctly and then merged them.

But did you merge with the right version?

I have found this work the devil. There are at least 3 piano editions and literally dozens of orchestrations and arrangements for various ensembles. Wiki has a partial list; Pictures at an Exhibition

Pictures at an Exhibition (Russian: Картинки с выставки – Воспоминание о Викторе Гартмане, Kartínki s výstavki – Vospominániye o Víktore Gártmane, lit. "Pictures from an Exhibition – A Remembrance of Viktor Hartmann"; French: Tableaux d'une exposition) is a suite of ten pieces (plus a recurring, varied Promenade) composed for piano by Russian composer Modest Mussorgsky in 1874. The suite is Mussorgsky's most famous piano composition and has become a showpiece for virtuoso pianists. It has become...

I have quite a few versions of this work precisely because there have been so many variations over the years. I want to keep them linked but this means linking them rather crudely to the more famous versions that roon is aware of. This is one of the most infuriating things about roon I find. With single part works it is possible to vary composition titles whilst keeping the compositions linked but this is not possible with multi-part works.

I think that’s the point. This is a very famous work, core repertoire, that many will have in their libraries and yet it requires more or less manual intervention as you seem to have done. I am away from home so I don’t know how many versions I have but my experience has been;

But did you merge with the right version?

No, although I did choose the orchestral rather than the piano and I was able to retain performer credits so I was happy enough.

…you’re right, and i was not able to change titles.

I think that’s the point. This is a very famous work, core repertoire, that many will have in their libraries and yet it requires more or less manual intervention as you seem to have done. I am away from home so I don’t know how many versions I have but my experience has been;

I did the following experiment today which seems to indicate that the issue is with Rovi / allmusic and their unwillingness to clean up the data on allmusic.com

I took my Pictures by Sargent, which is in Roon’s database but not listed on allmusic.com and of which Roon makes a mess by breaking pictures into three compositions, each starting when a Promenade comes around. 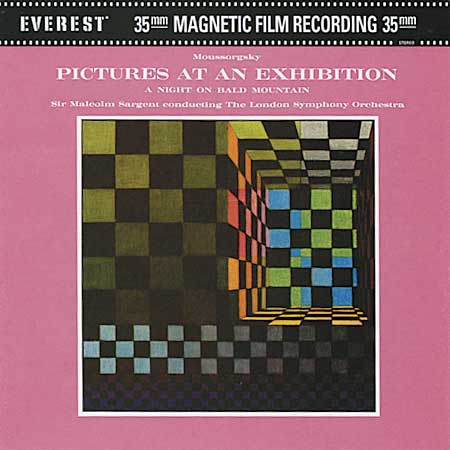 I found another Everest reissue by Sargent which has some additional pieces besides pictures and bald mountain:
https://www.allmusic.com/album/malcolm-sargent-conducts-tchaikovsky-mussorgsky-prokofiev-mw0001822248/releases
I then renumbered my tracks according to this template and identified my album as the one on allmusic,com. Lo and behold, Pictures is now identified as one composition: 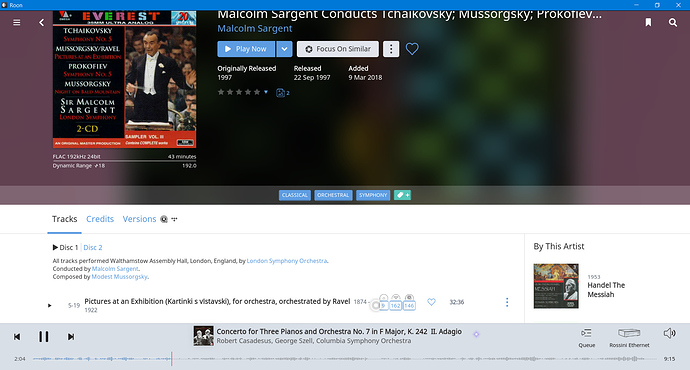 image.jpg1920×1030 391 KB
Although I feel like using some strong language at this point, I will stay composed and polite, but say the following:

I would imagine there are regular meetings with Rovi where feedback on such issues is shared in a structured way, so that Rovi can correct them and continually improve the quality of their product. I would also assume that there is follow up to ensure that the improvements actually get done in a timely manner.
Or is there any way for individuals to get feedback to Rovi in a way that does not end up on the “ignore” pile?