How to deal with messed-up Tidal albums

Here’s what I get for the Tidal album “Haydn 2032, Vol. 1: La Passione” by Giovanni Antonini 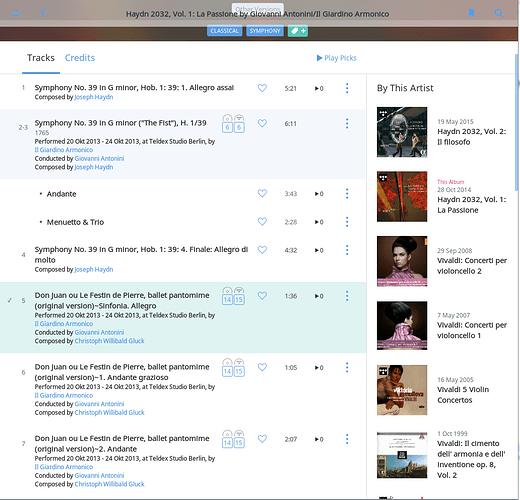 There are a number of issues which I would know how to fix if I had the album on my hard disk, using file tags. I have no idea how to do it within Roon.

The fact that track 4 has only basic info suggest you have a dodgy automatic identification. Can I suggest you manually identify it. Maybe one of the tracks will be red and causing a problem.

This may help and if so, we can work on the remaining problems.

Ah … that did it for the Haydn. This looks ok now.

Nothing changed for the Gluck, however, except that 17 versions are displayed. I guess it’s presently not possible to force tracks being grouped into compositions …

I suspect that’ll be a metadata error. Sometimes movements are marked in the metadata server as individual performers, which produces this problem. Can’t be fixed within the Roon app right now, I think.