How to deal with two performers with the same name?

What’s the correct way to deal with two performers with the same name? I have a classical album added from Qobuz (Beethoven’s Missa Solemnis / Philippe Herreweghe), with a credit to James Taylor, Tenor. It’s coming up in “Appearances in my library” for the singer/songwriter James Taylor.

If the performer isn’t correctly identified by Roon (sorry about that!) you can always edit it to display the correct one:

Thanks for the reply @beka . The problem is there are two artists with the same name (James Taylor), they are different people but are being treated by Roon as if they are the same. I’m not sure how to manage this.

Hello @beka and @matt - I’ve moved this post into the Support/Metadata Issues category, since this does concern a metadata issue.

While it will be possible to use the Roon Track and Album Editors to adjust the credits for this album manually, I think it would be better for Roon Labs to correct the issue in its own database at source, because that is where the confusion between the James Taylors is occurring.

I’ve looked at both versions of this Qobuz album (streamed and downloaded from Qobuz). The file metadata of the downloaded version does not list any credits for a James Taylor at all. However, once added into a Roon library, it, like the streamed version, gets additional credits from Roon’s cloud database, and this is the source of the incorrect credit attributions.

Interestingly, the false James Taylor gets a credit as a Performer on four of the six tracks, while James Taylor the Tenor is correctly credited as well on all six tracks… 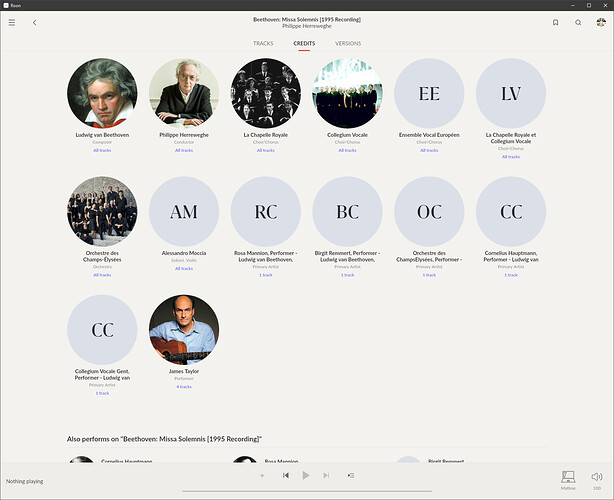 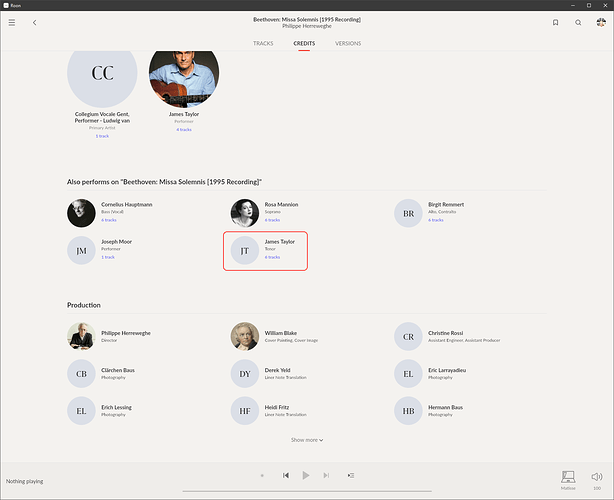 I can remove the credits for James Taylor, the Performer from this album manually by using both the Album and Track editors in Roon. 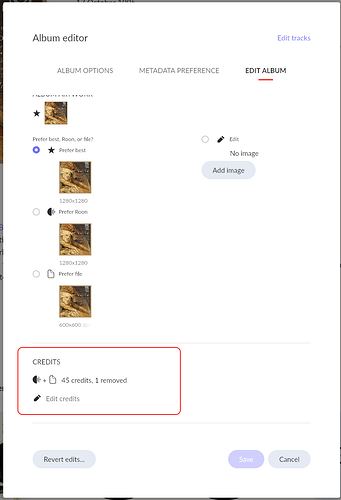 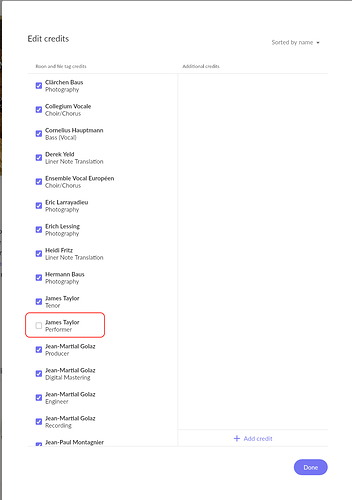 First select the Composition to select all tracks and open the Track Editor: 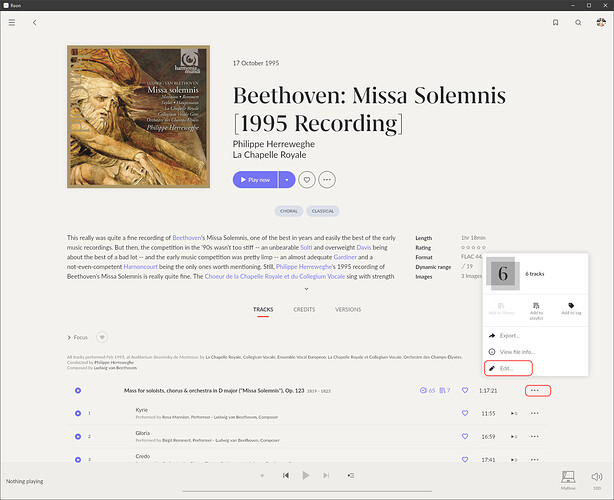 Then remove the James Taylor, Performer credit from the tracks… 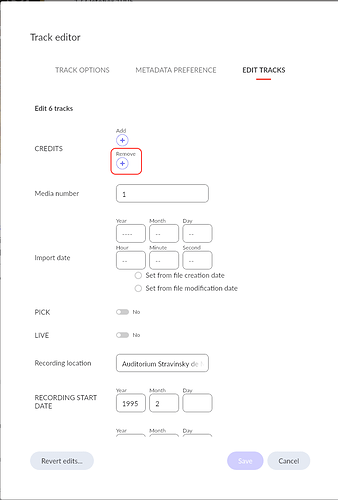 I appreciate the clarification and thanks for bringing it up. It is in fact an error and our team is aware of it. I don’t have a specific time fram on when this will be fixed, so I couldn’t be more grateful for @Geoff_Coupe’s instructions - thank you so much for the screenshots and step by step guide, as well as for managing the thread and placing it in the right category

I have a similar issue. I have a live album from the band Sugar that isn’t “recognised” but is listing another Sugar as the primary artist. I can add the correct one, but the old one still shows up too. How can I delete the other artist completely from my database?

And I have several tracks where the artists have the same band name but are a different version. Is there an easy way to distinguish them and make sure the right metadata is maintained?

Particularly ironic is the Roon overview for guitarist/singer Adam Levy which cautions “not to be confused with another guitarist of the same name who is a member of the Honeydogs”, together with a link to the Honeydogs.

Tapping that link takes you to the Honeydogs overview, with a link to Adam Levy. Not the Honeydogs’ Adam Levy, obviously, but the “not to be confused” guitarist/singer that we started from…

@beka @Geoff_Coupe I thought there might be a way for me, as a user, to combine or split artists in my collections, similar to how it’s possible with albums or compositions. Am I right in understanding that it’s not possible, that only Roon can correct the underlying problem here? Geoff thanks for the tips on how to remove an artist from an album as a workaround, I know how to do that.

Am I right in understanding that it’s not possible, that only Roon can correct the underlying problem here?

Yes, that’s correct. I understand that it’s in the queue to be fixed, but it’s a long queue. Fixing metadata is like cleaning the Augean stables - and for mere mortals that will take more than a single day…