How to designate Primary Version?

Here is what I see when I select the Qobuz version of the album. Where it originally said “add to library” to the right of the cover art when originally selected (I clicked it to add it to my library), it now says “focus on similar” just like any other album in my local collection. It also says “added January 15”. Doesn’t this indicate it’s been added to my library? Yet despite this, there is no Versions tab when viewing the Qobuz version like there is when viewing the local version. The Versions tab on the local version continues to display like I originally posted. 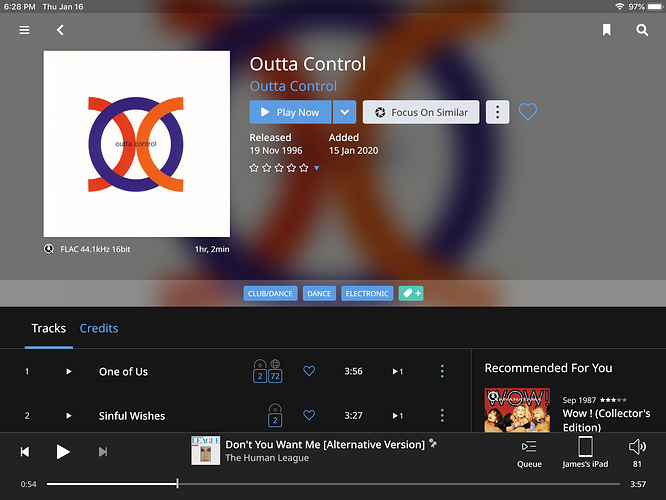 I don’t know. Chris’s example from Tidal says “2 Library Versions” yours from Qobuz not. But in Chris’s example both Albums have 6 tracks while your local Album only has 1 track versus 13 tracks for the album from Qobuz. So maybe Roon doesn’t count this as real version (of the same Album)?

Just bear in mind two releases of the same album with differing track counts are not considered by Roon to be the same release … because Roon deemed it so.

After some more testing, you and evand are correct. If the albums have a different number of tracks, then they are not considered different versions of the same album. Joel’s post seemed to indicate otherwise, but perhaps I misunderstand his post.

The Howard Jones albums I mentioned do have different number of tracks, supporting the above conclusion.

I found an album in my local library that also has a Quboz version listed with the same number of tracks. After adding the Qobuz version, then clicking the Versions tab, both versions show with the option to set either as the Primary version. 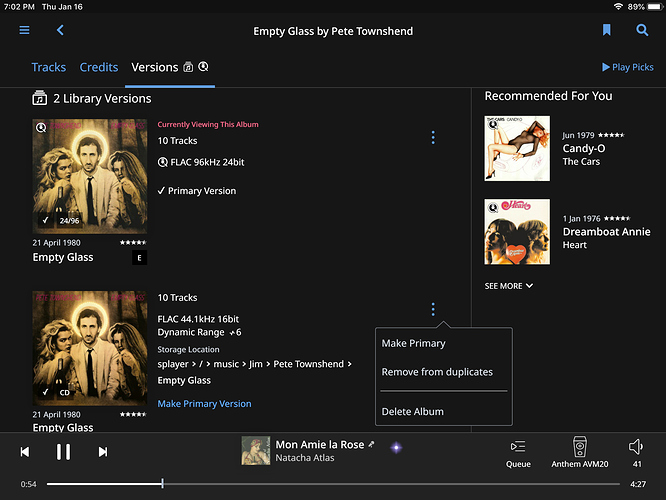 Joel didn’t disagree with the handling I described, only with the terminology I used - Roon sees it as the same album (I assume in a way that’s meaningful to Roon’s internal logic only because there’s nothing in how it’s presented to a user to betray that) but not the same release so it won’t group them - ie for reasons I cannot fathom, Roon groups releases, not albums.

Thank you for the clarification.

Is there a way to tell Roon to ALWAYS choose my local file as the primary?

Any time I create a focus, albums from my local library are not shown unless they are the primary version…and Roon seems to choose very arbitrarily which of my albums are primary from local or Qobuz. I want my local library to always be the first choice.

Help on this one appreciated.

Is there a way to tell Roon to ALWAYS choose my local file as the primary?

No, there is not.

Roon will normally select the file (album or track) with the highest resolution.

So, if you are adding Qobuz albums to your library, that exists already as a local file, you need to manually choose/correct the primary version.

Thanks for the reply.
I will be re-evaluating how I use the Qobuz library now that I am using Roon.
I used to just have every album I like as a favorite… Now I think I will only have Qobuz albums favorited if they are not in my local library, or if that version is something I want in addition to one I already have in FLAC or DSD.

My library is already getting cleaned up quite nicely.

Why, oh why? This is rather infuriating to learn. No clue how long this has been the case, or how many albums.

If I search for a new album, and hit plus button to add, it chooses Tidal CD version even if a better Hi Rez version is on Qobuz. See images. 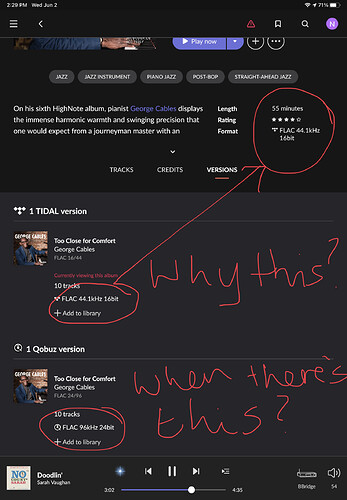 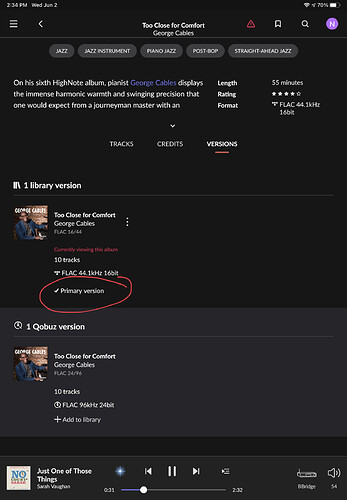 Also confirmed with another album. I’m tempted to stop Tidal because of this. Even if it rarely happens. It sucks having to always suspect (and sometimes correct) the behavior of one’s tools.

Another example of issue with wrong quality priorities described above. This one within Tidal itself. 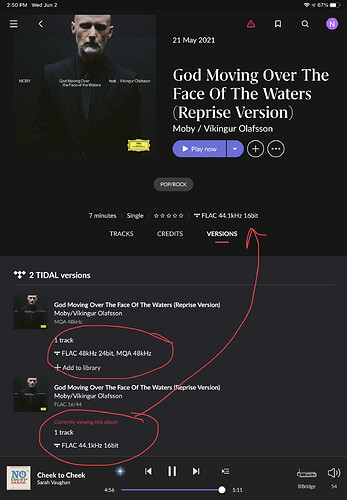 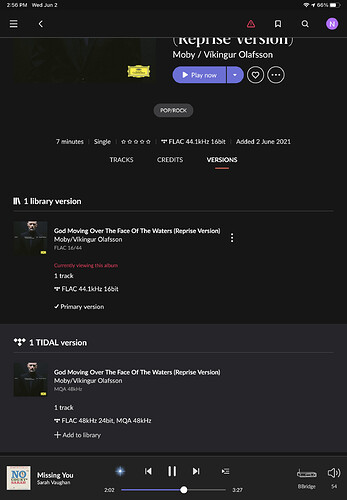 Really? That honestly sucks. I’ve been trying to find a way to make quoboz my primary so I don’t have to use Tidal whenever possible. Super annoying to have to go into versions every time I want to listen to a track without the downsides of MQA. Hopefully they can implement this feature sometime in the near future.

Well, looking at your Moby example again, apparently you have not added the MQA version to your library, I.e. that naturally this cannotbe the primary version.

If you have subscribed to Qobuz Sublime, and you add a highres album to your library, there’s still a very good chance that It will be registered as Primary by Roon. Of course it depends on the local version you have.
Dirk