How to dissociate a track listed as part of an album?

I’m sorry to ask, but I couldn’t find the answer by searching.
I downloaded an artist’s discography from BandCamp. There are about 5 singles, some EPs and several ‘regular’ albums. The Albums and EPs are in folders with the Album name and the singles are loose. I moved all of these over to the Artist’s folder on my ROCK Internal Storage.
All of the singles now list as part of the Album “Raquel Rodriguez” and not as single tracks. This isn’t right, of course. But it is made worse by the fact the artist already has a self-titled Album “Raquel Rodriguez”.
How do I unidentify the tracks into single tracks and dissociate them from the album they’ve been grouped into by the folder structure?

Did you try putting each single in their own folder as well?

Nope and Nope. Neither work.
When I did what @BlackJack suggested it just reaggregates them again into the same album name.
So I moved them to separate folders and removed the tracks from the album again, and it reaggregates them into the same album again.
Perhaps a problem is a dearth of metadata in these tracks from BandCamp. So I went in (via MP3Tag) and added album fields with the name of the single as the album. Then did the remove tracks again. Now it just reaggregates them into an album with a different name, the name of another track.
Hmmm…
Has anybody posted that Roon is Completely Useless for Pop Music Listeners?

Perhaps somewhere in that sequence you needed to clean the library. Roon remembers tracks that come back otherwise.

FWIW, I’ve just extracted a track from an album, and it stayed extracted. Do your singles appear separate at any time, or do they reaggregate immediately?

AHA!
I put in a new album field for each track, using the track title as the album title. But it created this problem: 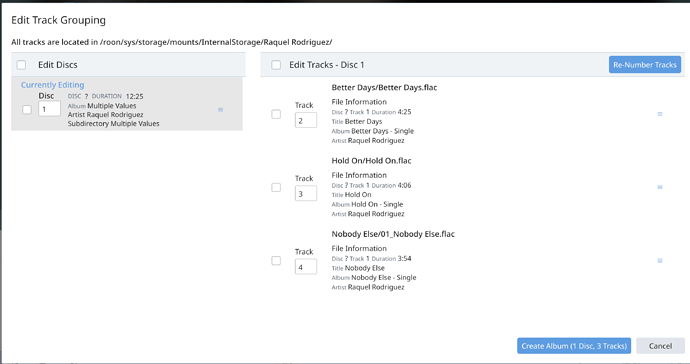 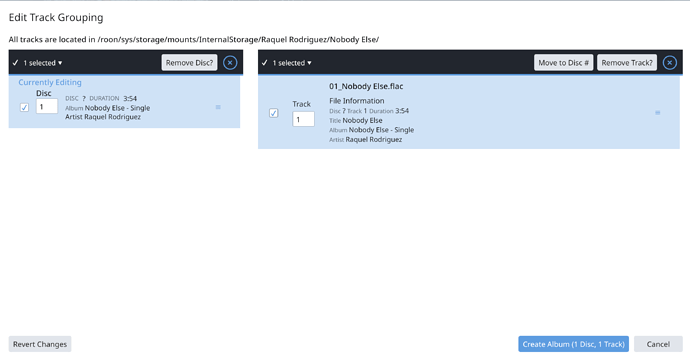