How to manage large compilation of a single artist?

I have a problem managing large compilation of single artist.

For example Maria Callas’ The Complete Studio Recordings (69 CDs). Roon correctly identifies it and numbers Disc 01 - 69. The problem is that, if I go to this album compilation, it tells me nothing about what is available. For example, if I want to listen to a specific opera (e.g. La Bohème), it is practically impossible to identify where it is. Even a search gives only a partial response.

Do I have to use mp3tag to retag the single discs? Do I have to rename the discs with the opera title as Album Title? What about discs that contains excerpts of different operas?

Is it possible to have a reply on this matter?

Similar problem exists on many other Classical music compilations, like Celibidache’s Symphonies or Sviatoslav Richter’s Complete Recordings, just to name a couple.

I don’t think it’s getting much coverage because it’s been covered before; it’s a common complaint unfortunately and I think a difficult one for Roon to solve simply.

The current system is ok for small sets, up to around 10 discs or so, but for large sets it’s not really a good solution to have them simply as disc1, disc2, etc.

The only way round it as I have found is is to take the individual disc subfolder out of the set’s main folder and store each disc as a main folder, put artwork appertaining to each disk in the relevant folder and you end up with something like this… 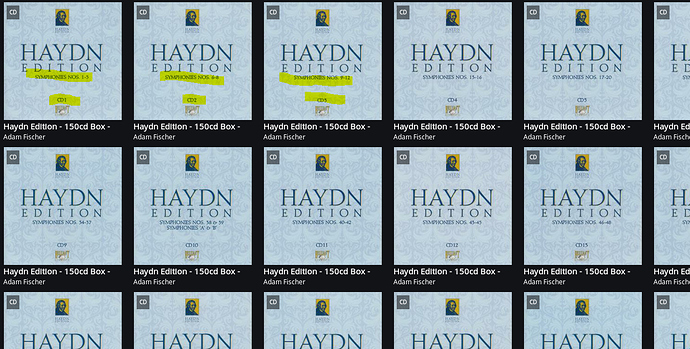 and the file/folder structure , thus… 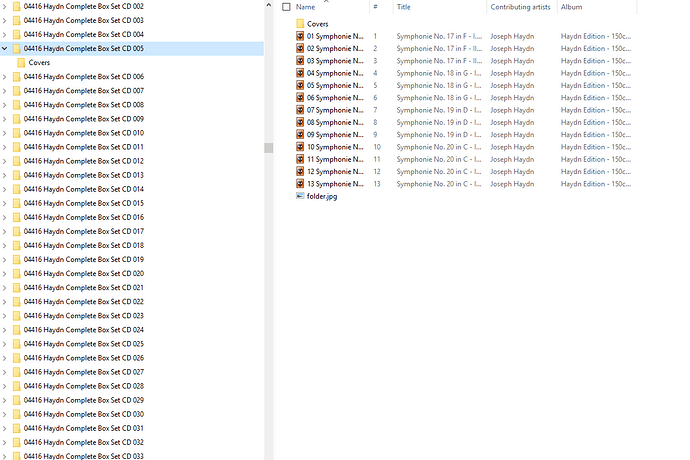 It’s not ideal, but it’s one way to have better viewing access to what’s on each disc

Thanks. I will split some set up.
I was thinking along the same lines. Unfortunately, however, some set do not have single cover for each CD/album.

I split one Classical set, eg Quartetto Italiano Complete Recordings (37 CDs), and it’s an unpleasant experience. It’s not something I would recommend for long sets.
I had to split the 37 albums compilation one by one because the Fix Grouping feature doesn’t have an “unmerge all” button. @support
This process generates - I do not know why - many duplicates in the last couple of discs, which then have to be edited out as well.
Furthermore, this process works well if each album title is already named properly. If that is not the case, like in Maria Callas Complete Recordings, each album title has to be edited manually.
If the set has separate covers for each album, one can insert it in each album folder and have Roon use that album artwork. In this way one has both a graphical (album artwork) and a written (album title) reference for each album.

Personally I would not split these big boxes up. Too much work, if one is trying to keep Roon’s metadata.

I’ve had detailed discussions with the team about this. They understand the problem. It’s just a matter of time, of which there is a limit. But I’m sure they’ll get there.

I mostly agree with you.
Anyhow, it’s easy to merge back the one set I did

I don’t have time to make myself work, even modest amounts. It all adds up…