How to merge artists in Roon 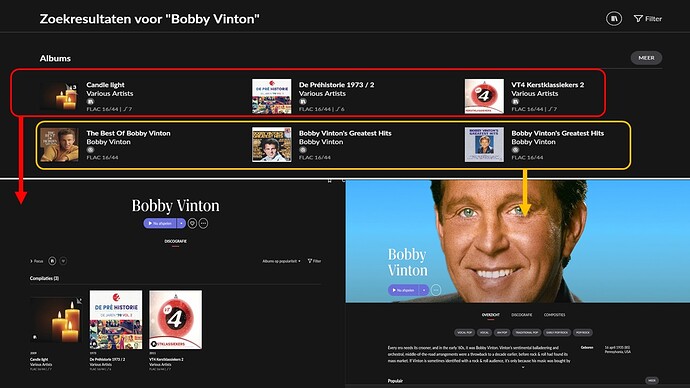 In a nutshell, search for Bobby Vinton, select and merge.
This thread should be useful.

Brian, got as far as search and select (both are selected), where is the merge command ?
Jan

On my Window 10 / NUC setup I get the “Merge artist” button just to the left of the close (x).

It looks like you are doing this through a search (all search results for Bobby V). Right? You don’t get the option to merge artists here.
I believe you’ll need to do this on your artist page. Will that be able to do what you want?

Thanks David, I use a Nucleus+ , an Android tablet , Ipad and a PC with Win10
That merge button is not visible on either of those 3

Scott , apparently the problem might be that the artists on the compilation albums are not the main artists, they do not show in the artists page.
But when looking for them by search they come up separately despite being the same artist.
So sometimes the artist link is made with the Roon metadata, but sometimes I get a double artist without metadata from Roon.

It should work…
Here I have selected two Doug’s, the first a primary artist, the second a bassist who does not appear in my artists browser. 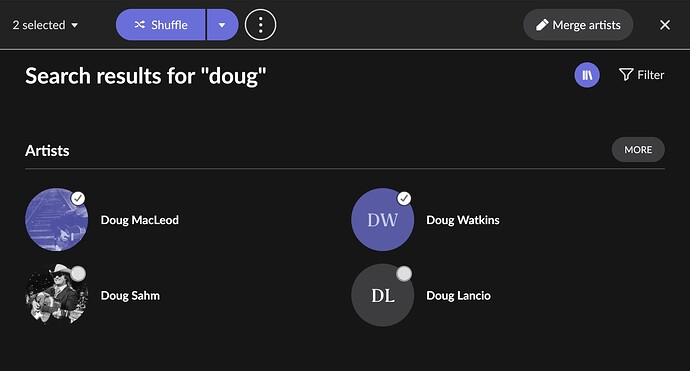 It does seem temperamental though. Occasionally, it just won’t work.

And, of course, the artists must be in your library.

Thanks Brian, but that “merge artists” button is missing with me

Scott , apparently the problem might be that the artists on the compilation albums are not the main artists, they do not show in the artists page.

I think you may be on to something there. If I search for James Taylor, there are a whole bunch of them. The first James Taylor is the one we all know. The second one has his picture. If I select both of them after a search, the merge function is available. If I select any of the other James Taylor other than the first or second, no merge is available.
Oddly, the ‘second’ James Taylor listed has the “James Taylor” artist in circle from the search. When I click on it there is also a picture of the most famous James Taylor, but no bio. All of the albums seem to be from another James Taylor. So while I could merge them, they are two different artists.
All of the other James Taylors that can’t be merged just have the JT in a circle, and they seem to be references to music that was also performed by James Taylor.
This situation is best characterized as a ‘dog’s breakfast’. Don’t know how that translates to Dutch, but this is a mess of metadata.
As @BrianW said, it appears to work on the results of a seach when the underlying meta data are well behaved.

Thanks guys !!
Solved the “Bobby Vinton” problem.
I did not have an album from him in my library, only on compilation albums, after adding an album from Qobuz to the library, the metadata connection was made.
And even after removing that Qobuz album from the library the connection is ok.
So does that mean that if you do not have an artists album in your library the metadata is not working 100% with artists on compilation albums ???

Does this sound like what you are seeing?:
Roon search fails to find nearly all Dolly Parton albums - Support - Roon Labs Community

indeed , yes it does