How to the change length of queue

I used Logitech Media Server for quite a long time and was in favour of the echonest/smartmix feature (until spotify messed up).
I had the Roon installed a few days ago and I will install Tidal/Qobuz in a while.
At present I only listen to my NAS music collection.
When selecting a title and selecting the Roon Radio option the system will generate songs automatically. Perfect!
The queue list shows only 1 song i.e. the song which is now playing (and above the songs played). The Roon Radio frame on the right shows the next song to play.
There is however no queue shown of songs for the next 30-60 minutes. What did I do wrong?
How can I change the setting for the length of the queue?

You didn’t do anything wrong. That’s how roon works when using the radio feature. After it has played a while you can look at 'history ’ to see what was played.

If you click the blue Thumbs Up button it will be added to the queue so you can get an extended preview of what’s coming up: 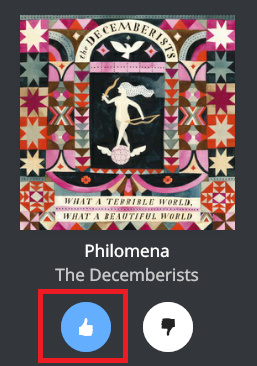 Thanks! This is a disapointment…
The present queue page is a huge blank page and should ideally be filled with the songtitles which are coming up to be played. Isn’t that one of the basics of a queue ?
I am probably spoiled by Logitech’s smartmix.

This is a little confusing for sure. The way to look at it is that it is not generating a playlist. It is just picking the next song.

But, a “smart” playlist feature would be nice. For example, picking a genre or a style or an artist (or multiple artists) or an “era” etc. and specifying a number of tracks or a time duration and having it generate a playlist that you could then play or save or whatever would be pretty cool.

Still, I like the “wonder what it will play next?” aspect of radio.

I would recommend also posting your suggestion in the 'feature request" section of the site. Our product team and developers keep a close eye on that category, so that’s definitely the best place to propose a change like this and get feedback from the Community.

We appreciate the feedback!