How to use Remote to access my music on Core

My own Wifi (nothing to do with this question)

Hello. I’ve installed Roon as my “Core” on the Mac Mini that’s a central entertainment device, connected to my speakers. When I am home I’d like to use my iPhone as the remote though, so Mac as “headless”. I haven’t been able to find where to do this. Downloaded the Room app on iPhone, but it doesn’t show cleanly the playlists from Tidal or the music on my Mac Mini. I expected all of the music on my account to be available from all devices where I login as myself. Am I missing something in the U…

Before I end my trial in less than a day because Roon has proven to be entirely pointless (and not at all close to its spiel on the “How it works” page), I’d like to ensure I’m not missing something. I have the Core on my Mac Mini already picking up my Tidal playlists and my local files. The UI there is already quite poor as it wastes space with albums, arttists, and all the jazz, but loses the most basic useful features of showing playlists as I’ve organized them, or even allowing me to search a song within a playlist. Anyway, on the Core it’s fine. The issue is on my iPhone remote app, which I’d like to use somewhat like Spotify Connect – I’d like to use my phone to play the music on my Mac Mini. This seems very hard to figure out. How can the remote work as a remote?

Thanks for reaching out to us here. Just so you are aware - we don’t regularly monitor the Roon Software section, if you need technical assistance the best place to reach us is in #support as you have done so here.

Before I end my trial in less than a day

I will follow-up via private message regarding this.

The issue is on my iPhone remote app, which I’d like to use somewhat like Spotify Connect – I’d like to use my phone to play the music on my Mac Mini. This seems very hard to figure out. How can the remote work as a remote?

Spotify is not integrated with Roon at this time, but if you wish to play music on the Mac Mini from Roon, on your iPhone you would need to go to Roon Settings -> Audio and enable your Mac Mini zone.

Thank you Noris. Let me know how to set up Roon (I haven’t deleted it just yet) so that I can have all my Tidal playlists and my Flac files in one place. This can be in the “Core”, which is my Mac Mini in my living room.

Then all I need is an easy way to play those files in various places/zones:

I’d like to play anywhere, from anywhere. So on my iPhone and iPad, I just need a simple app that allows me to control what to play, and where to play it. Don’t need any other jazz about musical background, reams of album covers, artists info, etc.

For TIDAL access, you’ll want to sign in via the Roon Settings -> Services tab if you haven’t logged in there already. Adding content to Roon can be done via the Settings -> Storage tab. More information on how to add content via file path can be found here: Add Folders By Path

Then all I need is an easy way to play those files in various places/zones:

I’d like to play anywhere, from anywhere. So on my iPhone and iPad, I just need a simple app that allows me to control what to play, and where to play it.

This is all achievable through the zone picker. First enable the audio zone in Roon Settings -> Audio from your iPhone/iPad and then use the zone picker to select the appropriate zone prior to starting playback:

For the bluetooth zone, you’ll need to connect the iOS device to it via the iOS System Settings -> Bluetooth and then set Roon to output to the iPad/iPhone zone (which will then re-route the audio via the connected bluetooth speaker).

If you wish to access the iPad/iPhone zone from your Core, you’ll also want to disable it being a Private Zone and then you’ll be able to control it from the Core also.

Does this help resolve your question? If you are still having difficulties, some more information on what exactly is going wrong would be helpful.

Thank you. But this is pretty far from a sensible UI. Because you’ve taken the time to share those things (which I should have been able to figure out on my own in a semi-decent UI), let me return the favor. 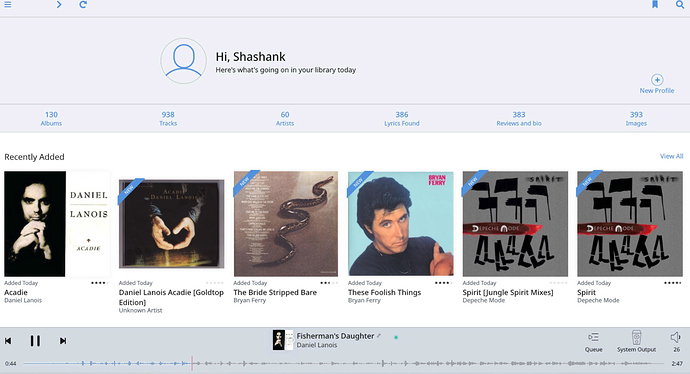 Note that the Tidal playlists are all in there, as are my FLAC files from the Music folder. However, I don’t expect to see albums, arists, etc. That’s probably handy for lazy users who have no idea how (or the patience) to create their own playlists. But many of us who spend time with Tidal, Spotify, etc, have meiculously created sensible playlists. I’d expect to see that right up there in he home screen. Half the Home screen could be my playlists, the other half my devices clearly shown. Instead, there’s this pointless replication of some music app. I have determined for myself, by clicking through this crowded interface, that I can set up “bookmarks”, a concept that has a questionable place in an app like this if the UX were any better, but that’s multiple clicks away, as is the hamburger menu on the left, where Playlists are right at the bottom while pointless replication of Tidal etc is crowding out the important real estate at the top – 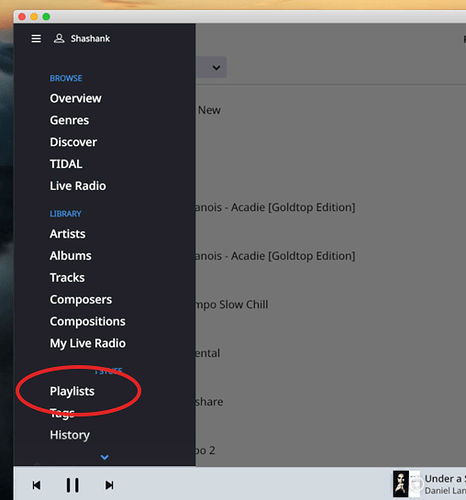 Can I find this zone stuff easily? Not really. The Home screen is as useless as it is on the Core. Seriously, after Spotify and Tidal, if I had to play the music on the iPhone itself, I really really really do not need Roon to do that. I have both those apps and they work just fine. Spotify UX quite a bit better than Tidal. INstead, I need Roon to be my remote across devices. The Home screen completely misses this point.

However, worse, there’s the even more useless hamburger on the iPhone– 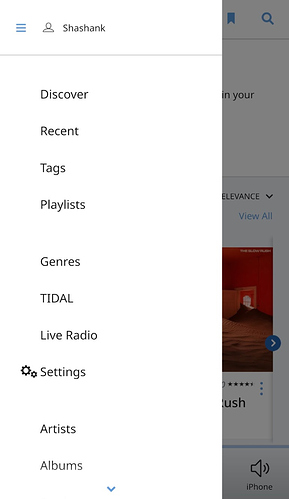 Can I find my “Zones” anywhere? Nope. Is there anything that tells me there may be devices called “Zones”? Nope.

As a user I am expected to come to these forums, register, find solutions. WHich point me to Knowledge Base. All that work for the most obvious and singular purpose of Zoon. Which is missing in all its UI thus far. 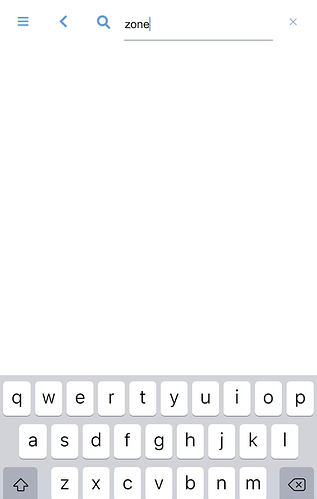 No. So the search is not really at app level, it’s just for playlists or songs. Great. Not what I need Roon for. So I continue.

When I finally visit one of my playlists, via the hamburger menu and not tthe Home screen, I look for “Zones” again– 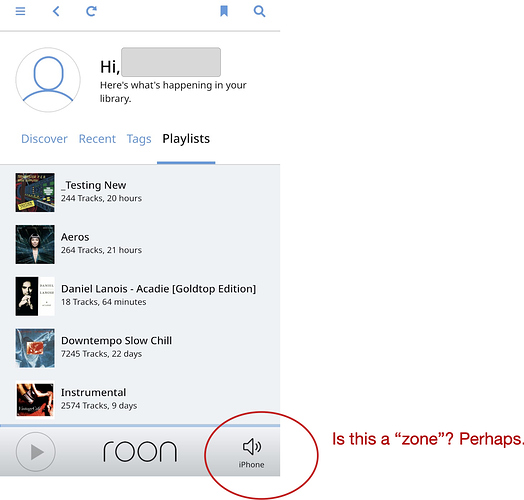 Nowhere does it mention a zone. I guess it’s that iPhone thing because of the volume icon. Is that the “currently playing” icon? Anyone’s guess. It looks like volume. 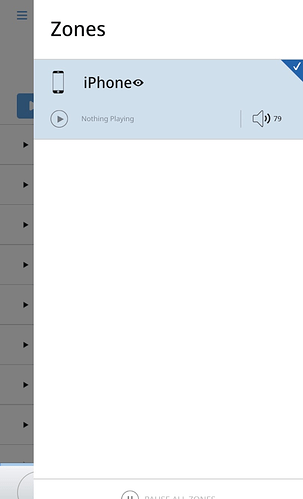 So, my main Zone which is my Mac Mini is not shown here. Can I somehow trigger the recognisation of that device/zone? Nope. No other meaningful button here.

I click on the current playlist then, to see if the “zone” is mentioned there. As expected by now, no mention of the word Zone, but it does show my iPhone: 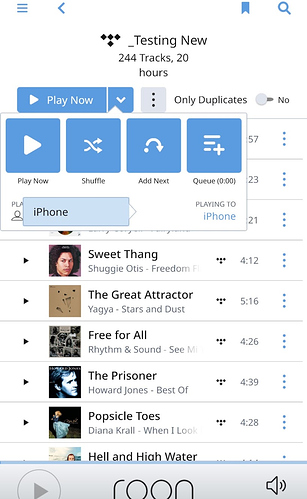 Is there an “Add Zone” or “Discover Zone” stuff there? Nope.

So I finally go back to hamburger menu and find “Settings”. Maybe something intelligible might lurk there. 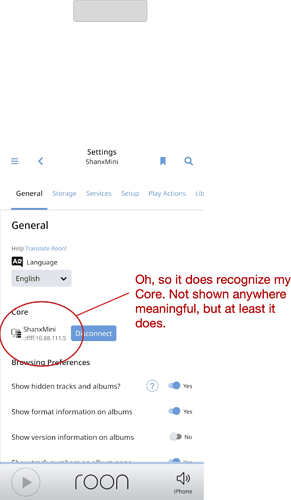 What to do with this Core? How do I play from iPhone to this Core? No idea.

So I continue to the “Services” tab. Could it be the “Devices” again? Not Zones then? Well let’s try: 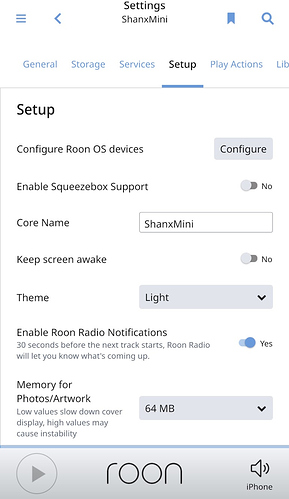 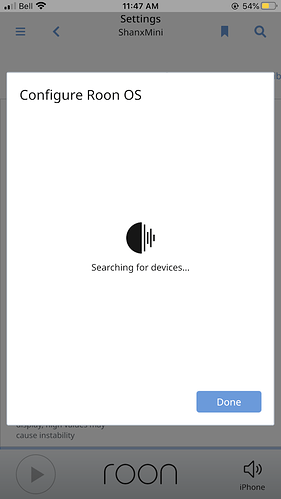 After 10 minutes of “Searching…”, that doesn’t yield anything. The Mac Mini is an arm’s length from me as I’m sitting next to it. So I suppose this Configure Devices is not quite the way to add a Device or Zone.

So I move across other tabs. “Audio” seems to have something because it shows my iPhone, so perhaps I can also instruct my app to show the Core here…both of which may be devices to play to– 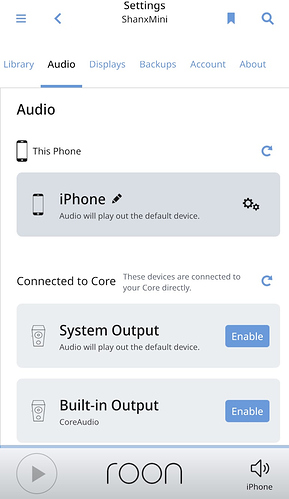 Maybe in that Core setting, the “System Output” is the place?
Let me Enable that.

YAY, that does the trick.

Now, every time I laboriously go through tthe hamburger menu --> Playlists --> (Select Tidal platlist) -> I can change the “Zone” (Without the heading as such) from the iPhone at the bottom to the Core System Output, and it’ll play on my Mac Mini…which is connected to my powered speakers.

Thanks for the help here, but seriously, please invest in some proper UI designers who understand why users will use Roon.

(PS: inside my playlists, if I want to search a specific song, there’s no way to find it. I have to scroll up and down. Great! No wonder Spotify Connect is such a huge hit.)

Thanks for the feedback here. We are always working to simplify Roon and the UI as much as possible - so keep an eye out for changes in this area down the road.

If you have any specific suggestions, we have a #roon:feature-requests of this site, which can be used to provide feedback to the product team regarding what changes you’d like to see as well as get the community’s input.

Nowhere does it mention a zone. I guess it’s that iPhone thing because of the volume icon. Is that the “currently playing” icon? Anyone’s guess. It looks like volume.

Yes, you can switch zones there as I indicated in my first response to you:

The only way that a Roon Remote works at the present time is if it is connected to the Core (as in the Roon app won’t work without a connection to the Core).

After 10 minutes of “Searching…”, that doesn’t yield anything.

Configure Roon OS screen is for RoonOS based systems, such as Nucleus or ROCK. Your Mac Core wouldn’t show up there since this is not a RoonOS based operating system.

We realize that there is a learning curve to learn the UI, but once you do learn how it functions, it is powerful. One other feature which you may want to try as you continue your Roon trial would be the Focus Feature and this can be accessed in the hamburger menu -> Tracks -> Focus section.

It looks like you’re on your way here, but if you have any further difficulties, just let us know and we can take a look. Thanks!

Thank you. But imho the UI needs to be re-thought, not just tweaked as a matter of small feedback. The home screen should be the reason people have Roon, not a replacement for artists, albums, and all that jazz. This is a fundamental rethink.

Anyway, thanks. Roon is not for me for now – there are far simpler ways to play music all over my place.