one of CPU cores are hitting 100C

Jussi already commented, this is less likely a problem since it stays within its specs.

But I certainly agree with “poor little nuc” sentiment, it is!!! hahaha

Very true, it will most likely be fine. But I’m usually captain overkill and then I start thinking… hmm,

what if… And then there goes a day of tinkering and I’d up with a nuc that looks like it has a blower from a funny car sticking out of the hood. Lol. Then I move on to something else.

Thank Roon for roon remote and Jussi for NAA. Because of them I don’t need a small silent PC.

Don’t now where to fins root cause, but I experience stability issues. It started with the so called closer match update between Roon and HQP. Almost att the same time I installed the Matrix USB card, so a while I thought the card’s playing tricks with me, but after the same issues was present also with inboard USB ports my thoughts are there is something lese. But what? There are channel drops, complete playback stops, the ever present clicks between tracks of different source material, BUT remains the same even if I set ONE definite output sample rate, so it shouold not be the DAC conversion (DSD Direct). I have to restart HQP or Roon or both. Differs from time to time.
This is getting highly annoying now. Today I received a Roon update and thought, “perhaps …”, but no. It stopped dead four tracks into black album, First restart of HQPe, did not fix it, and restart of Roon ROCK it was in business again.
I am not writing this to blame anyone, but lately, the stability issue is bothering me in my st-up. It makes me sad, cuz when in operation, it is best ever. Is there anyone, who can think loud and give me both sane and insane tips and tricks. I have tested most insane now, my speciality, so the sane is highly appreciated … I guess it is some pilot error, but can’t figure it out miself … Anyone else have same problems? Erratic drops and stops with no apparent reason?

Running HQPlayer Embedded (in UPNP mode with Minimserver, not using Roon) without any issue here, hence I should think about a Roon issue or a Roon/HQPe integration issue

Then restart the service with “systemctl restart hqplayerd”

This makes it behave same way as latest Desktop release. Let me know if it helps for you.

This shouldn’t be necessary. But for some people it was happening on macOS. Never heard anybody having the issue on Linux. But worth trying.

@jussi_laako I have picked this from “parallel” topic.

Also unrelated, but if you have enough processing power, try FIR2 integrator and Xfi rate converter.

Can you tell us more about FIR2 ? what was your intended design idea for this ?

My current “SDM → SDM” setting is IIR+Xfi+7ECv2@256x48, this combination is fantastic (well, this you know), and I suppose it has formed a habbitual pattern. As I certainly tried FIR2, but to say “better” or “worse” I can currently not, to be frank, so rolled back to IIR. But after this remark of yours I’ve set it back to FIR2 to give another try, now with more curiosity.

IIR behaves more like a mixed-signal implementation would. It is more typical for modulators.

FIR2 is designed to be very similar to IIR in terms of bandwidth response, but it has totally phase linear behavior and it also has improved transient response. But these differences are very small, so likely you won’t notice any big differences.

A-ha! Muchas gracias! SACD party tonight ! Hehe, let’s see how strong my bias is after such an introduction.

I hear a difference indeed for the better converting all to DSD 256 and 512!

Anyone here using Amanero combo384 and is able to perfectly play DSD with matrix pipeline enabled?
Would you mind telling me which firmware your Amanero is loaded with?

Touching upon a SDM → SDM subject, I realised that recently for a fairly long time i’ve been listening 100% to streaming (I have Qobuz) rarely refering to my very own library.

Et voilà, my verdict on FIR2 is not scientific, but… I have changed the settings to FIR2+Xfi+7ECv2@256x48. and after hours of SACD source play, I put is simply - the sound is just great (to my ears). I’m recconected again and still rediscovering my digitased SACD collection. The quality of reproduction is fantastic. It’s so good that I did not bother (not even thought of…) to do any type of testing. Well, I admit that after an hour or so I flipped couple of times between IIR and FIR2, but the momentarily differences if audiuble, are not immediatelly obvious. And repeating my self again, since the combination of FIR2+Xfi is plain great I simply continued to flow with my music and music and music again…

PS: One additional remark… I figured SACD or SDM sources rather are fairly sensitive to “Max Volume” setting in HQp. Having it on “-3” for starters, I had few “classic” ones produced clipping. Finally I landed at “Max volume (dBFS) = -6”, no issues.

One additional remark… I figured SACD or SDM sources rather are fairly sensitive to “Max Volume” setting in HQp. Having it on “-3” for starters, I had few “classic” ones produced clipping. Finally I landed at “Max volume (dBFS) = -6”, no issues.

Yes, this is the case. Reason is that SACD spec allows momentary levels of +3.15 dB. The way this level is calculated though is very simplistic and when going through more advanced algorithms it may be different. Many DACs clip hard in such cases, and for that reason HQPlayer begins soft limiting at 0 dB. And has hard limit of +3.15 dB. Many SACDs have such over-modulated levels.

Can you please help with a new fingerprint, I have emailed a couple of times but not sure how to get noticed.

I’m now on emails from May 3rd. So if you sent email before that, it has gone missing/missed for some reason and please send it again. Also include your original license key to make things faster. 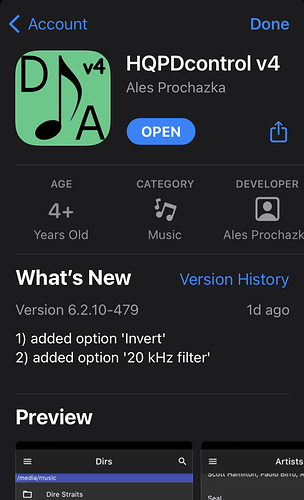 I always thought the addition of the 1x and Nx option to the filter setting would be nice. I wonder if there is a reason this is not incorporated in the app?

I sent it on the 29th so have just resent. Could you confirm receipt just in case it’s lost again? Thanks

I am sorry, Jussi, but the inside part of Linux software is still a mystery to me, I have not got the slightest idea how to approach the suggested actions för HQPe in your answer, to get it work more like the desktop.

The problem still is bothering me, though. It even started to click while playing a track today (very rare, but happens). Restarted HQPe and now operating flawless, so far, no dropouts. There is something there, don’t know if it belongs to Roon or HQP. Tried USB out from Roon ROCK, no problems. But did not activate any heavy dsp corrections and the output was pcm, a different route inside the DAC as well, så not comparable in that sense.

The thing is, when booting the same computer (HQPe) as a windows PC and playing music or watching TV, eg Netflix, HBO, … nothing goes wrong, no clicks no dropouts. It would never however be an option to run a desktop version of the HQP, windows is far to unpredictable to even consider. It would perhaps be a clean install without anything else, besides HQP, most processes stopped, also any erratic search for various driver updates and whatever the computer do besides being a computer, not involved in the HQP action. But then that computer purpose is lost, Windows it is our way to open TV streaming and Spotify for my wife. She would go completely bananas if she experienced this lean playback method we use here, with it’s pro’s and con’s. She is a spotifyer, whatever propaganda I use. Now with the ongoing issues I just shut up … 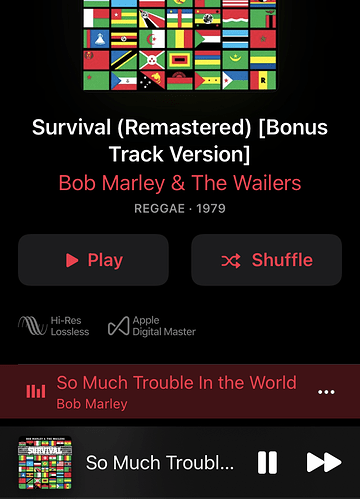 how does the 20kHz filter work?