You might like to give more specific system details like graphics, etc and what you are using for the remote display, or if it’s on the same system.

Screen shots of the audio path might also be helpful and the audio setups for the zone in question.

Also tagging @support for you.

Certainly, thanks. I’m using a Dell Lati notebook (wireless) and a Dell i5 tower (wired) for the remote display. Both should have plenty of power and gfx capability. 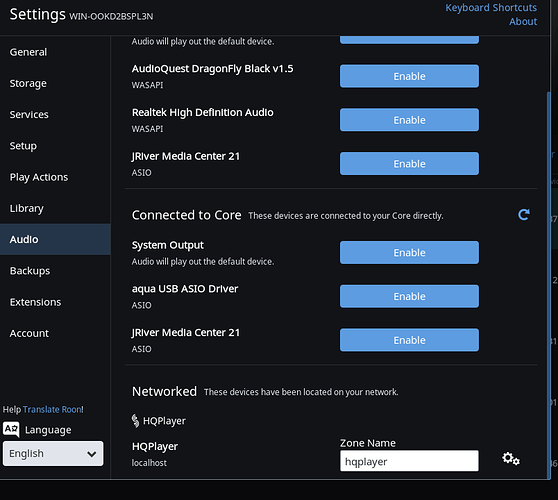 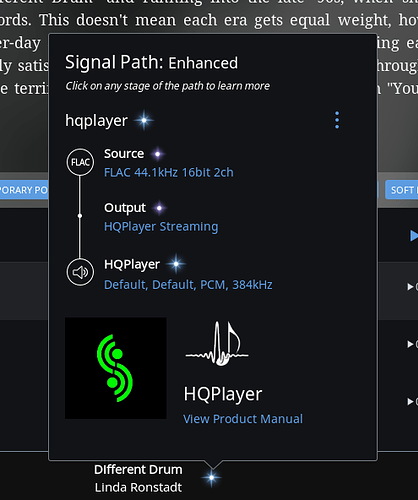 HQ player is upsampling hence the blue icon. Are your graphics drivers up to date?

Hi @Steven_Bonamo ---- Thank you for the report and sharing these observations you have made with us. The feedback is appreciated!

As stated in @Henry_McLeod’s post above, please do confirm that your graphics drivers are fully up to date. Additionally, in regard to these behaviors you’ve noted:

Another thing to confirm, are you running the latest version of HQPlayer? Development is very active and some of it related directly to Roon integration.

I noticed the same thing. And I’m up to date on my Roon and HQPlayer software. Does it say “enhanced” cause it’s going through HQPlayer? I guess I’m wondering what the blue and purple colors signify.
Making sure I’m getting the correct output.
Thanks,
Spencer 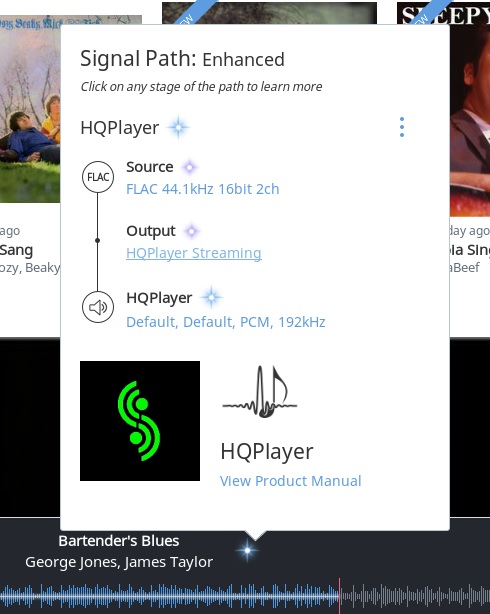 Also, under “HQPlayer” in the screenshot from my previous post, it’s says, “Default, Default, PCM, 192kHz”. Shouldn’t it show my HQ settings like in this screenshot? 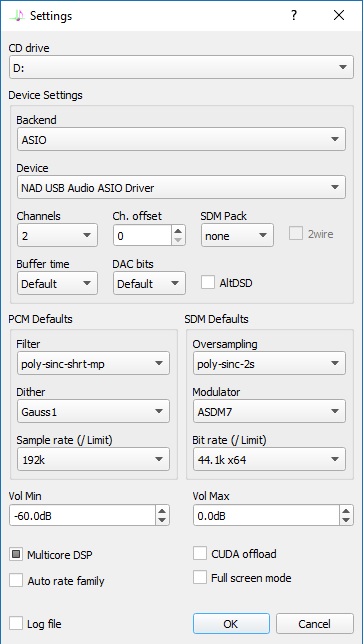 I guess I’m wondering what the blue and purple colors signify.

Thank you. That’s a nice helpful simple explanation. It’s upsampling to 192 kHz so enhanced it is.

Yes, as my description above I have the client interface on 2 machines, both have the latest gfx drivers and both show the same thing - a mix of blue and purple. Based on the Spence’s comments, is it possible the fact that HQplayer upsamples everything to PCM 384 it’s considered “enhanced” and as such shows as blue? If so, then what’s the difference between blue and purple?

WRT skipped tracks, I am only running one zone and I only use Roon with HQplayer. I can check that later w/o HQplayer and Roon direct.

Thanks Eric. Any thoughts on my other issues?

While playing tracks the progress bar never moves and track information doesn’t keep up as tracks play (graphic of track and album are sometimes 1 track behind what’s playing.

Sometimes tracks are skipped when placed in the queue. You need to go back manually to play them.

Continuing forward, have you had a chance to verify how things perform with HQPlayer temporarily out of the mix? I also noticed in the screenshot you have provided above that you have access to AudioQuest DragonFly Black, does this zone exhibit the same behavior during playback as the HQPlayer zone does?

How often would you say the “track skipping” occurs? Is it readily reproducible or this an intermittent behavior? Based on your feedback it seems to be the latter, but please do confirm. Additionally, when you do notice this occurring can you think of any patterns in behavior that may be triggering this response?

Performing a quick test using my local PC with an Audioquest black, I haven’t seen any track skipping and the track progress bar does move, so it’s specific to HQplayer. Has anyone else seen this with HQplayer?

Hi @Steven_Bonamo — Thank you for the follow up and sharing your observations after having performed the proposed test with the DragonFly. The additional insight is appreciated!

Continuing forward, after reading your most recent post it would seem that this behavior is isolated to when HQPlayer is in the mix and as such I recalled in one of your earlier posts that you were running v3.20.4 of HQPLayer. I just checked the HQPlayer website and it appears that there have been a few updates since that release: 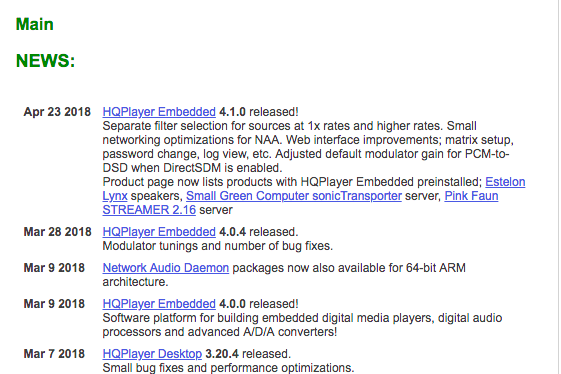 Can you please try updating and letting me know what the experience is like afterwards?

All the updates are for HQPlayer embedded or 64 bit ARM processors which don’t apply to my Windows PC.

, thank you for pointing that out to me. My apologies for the confusion on my part.

While it may seem a touch elementary have you tried reinstalling HQPlayer since noticing this behavior during playback?

BTW, I uninstalled HQPlayer and reinstalled, same issue. Songs are skipped, stop part way through and passed to the next song and the time left indicator and current track isn’t accurate.

Hi @Steven_Bonamo ---- Thank you for getting in touch, hope all has been well!

I appreciate you giving the proposed troubleshooting exercise a shot and sharing your observations with me. The insight is appreciated and sorry to hear of the continued troubles. Moving forward, I would like to enable diagnostics on your account so our tech team can have a closer look into this behavior fo you you. However, before I enable this feature may I very kindly ask you to please provide the following:

Please reproduce the issue and note the following…