When the unsampling is engaged on Roon, the music stops or distorted significantly. Qobuz sublime, Tidal hifi, downloaded dsd/hi-res files.

I contacted chord and did everything that was recommended (no unsampling) still no luck. Then did audio optimization set-up.

DSD 64 is the only unsampling works but I have to turn on the volume significantly higher compared playing in PCM.

I also have a Chord DAC and can upsample in Roon up to 384 (though I can’t see the point!). If I were you I would try things without the “audiophile optimizer” and without the jitterbug.

I agree with you about the unsampling. My interest is figuring out why it is an issue with Hugo 2? I have a Teac and it unsamples easily to dsd 256/PCM 352 without a hitch. If I may ask do you use ASIO/WASAPI with Hugo 2 for Roon, also I put audio optimizer/jitterbug to make sure Windows 10 is not causing the issue.

You should upsample to the highest PCM rate the Huge 2 supports.
There is no point in upsampling to DSD the DAC wil convert back to PCM.
Chord DACs is optimized for PCM.

I tried the highest PCM rate which is also not possible. Thanks for the suggestion.

Try the following steps to help diagnose where in your playback chain this issue is occurring.

Using a Windows PC running Windows 10 Pro and a Chord Hugo2, we have been able to use Roon’s upsampling features without issue in the lab.

The minute I enable DSP the signal gets distorted. On Audirvana Plus for Windows, it just stops. As mentioned I thought it was something wrong with Hugo 2, the rep at Chord recommended trying WASAPI which I did. The only thing I am yet to see - if the USB port is a problem, because I have only USB 3.0, USB C, and Thunderbolt. 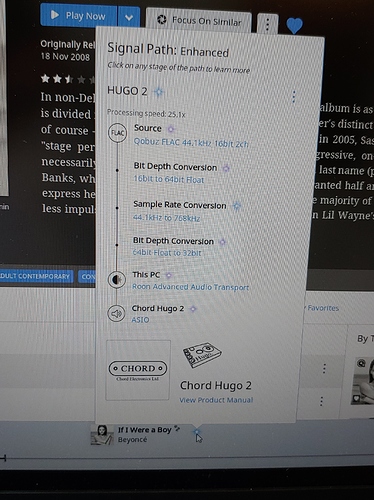 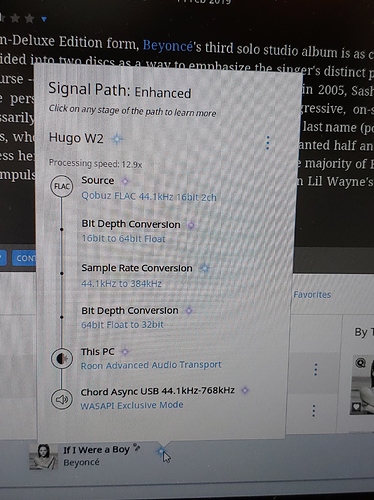 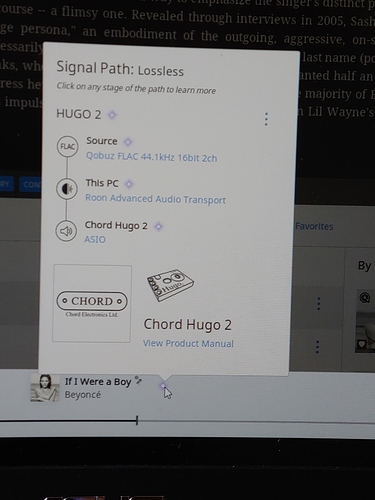 I am attaching three screen shots - ASIO, WASAPI (with DSP engaged) and the other with no DSP which is perfectly. I played the Mozart (352.8) without DSP it played smooth no problems at all.

I would recommend reaching out to Chord Electronics in regards to this behavior you are seeing with the Chord Hugo2. We are unable to reproduce this behavior with our hardware that is in house.