I’ve been struggling with this for a since the beginning. I’ve tried uninstalling and reinstalling. Hundreds of albums with most of them not even being in genres I listen too. None of these are in my local or tidal library while some that are in my tidal library doesn’t even show up. But they are both in my album and artist views.

Have you tried playing those albums. I had unknown albums which turned out to be obscure albums from my collection that ROON incorrectly tried to assign to what it thought was the correct one, usually some-one I’d never heard of. Manually assigning my tags fixed the albums.

Does Roon mark them as CD or Tidal in the “enhanced” album view?

If Tidal, just delete them all. You can always get them back again

I once had this where I seemed to be “given” a whole load of albums from several genres I would not normally select.

If they’re marked as CD then perhaps previous suggestion may help.

in Roon go to TIDAL section, click Collections, see screenshot below. Maybe you’ve selected some of these Genres upon setup. AFAIK to remove them all at once you need to setup Roon from scratch. 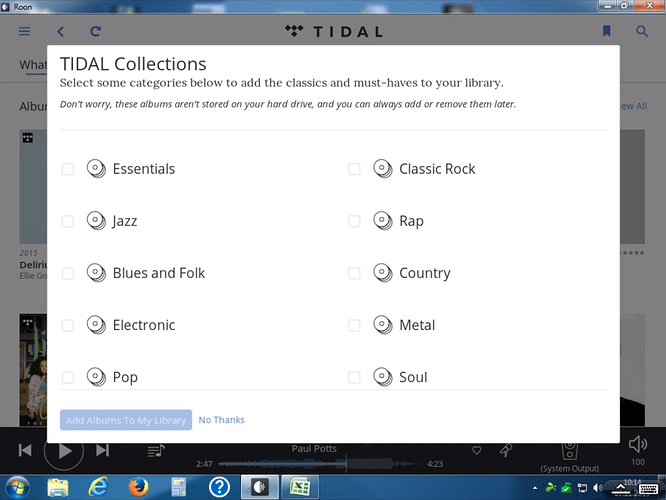 It’s actually quite easy to remove the Tidal collections – no reinstall needed:

Also in the tidal collection setup, where you chose the genres you want added, I re-did that as well multiple times. I even tried not electing any genres and it still added hundreds of albums from several different genres.

So that we are clear, let me give you an example. On the tidal collection setup page, I can select jazz and only jazz. In return it will add hundreds of albums consisting of rock, heavy metal, country etc. I can go through and delete everything and set it up again. This time, I select “no thanks” option under tidal collections and it will still add hundreds of albums from genres I never listen to. Now on my tidal account using tidal software on my pc or any of my portable devices, the add to collection option works perfectly.

The hint from RBM above removes only these collection, not your albums you’ve added to your library manually. Have you tried it?

yes. It either removed all of tidal collections or I would have to manually remove over 300 albums individually which is not feasible for me. I don’t want to remove tidal. I just don’t want it adding hundreds of albums that I did not tell it to add.do you actually not understand what I am asking?

Let me give you another example. I select jazz as a genre to add to my collections. It will add some jazz, but it also adds a ton of rock, metal and country. I focus on rock so it would be easy to delete to whole genre from my collection. But it focus on all of my jazz albums that I don’t want to remove.

In case you may think I don’t know the difference between jazz and rock, I tell it to focus on rock, and albums from Billie holiday, diana krall and Ella Fitzgerald shows up. I try to add only jazz to my collection and albums like Billy Joel, bob Dylan, Bruce springsting, and u2 shows up. I fact hundreds of them.

I suspect there may be some misconceptions here that are standing in the way of achieving what you want. Let’s step through things slowly to be sure we are all on the same page.

Firstly, Roon offers to import pre-made Tidal collections in two ways. Firstly at setup and subsequently through the TIDAL/Collections menu. The latter process does not delete any albums from your existing TIDAL library, it just adds TIDAL albums in the collection to that library. It cannot be used to remove albums that you don’t want because it is never subtractive, only additive.

When you choose to add a Tidal Collection then Roon tags the albums added with specific tags such as [TIDAL: Rock]. These tags are not added to Tidal albums that you import to your library outside the Collections process so they are a good way of distinguishing Collection additions from individual additions.

The FAQ cited in Rene’s post above steps through the process to delete albums imported in a Collection that you do not want to retain. There is an important distinction between focussing by the relevant Collection tag in the Tag Manager and focussing by genre. If you want to retain some albums from the Collection you can deselect particular albums after selecting all.

Sometimes there can be a delay after using Edit/Delete Album while Tidal and Roon synchronise. You can hide the albums you have deleted by repeating the selection process and using Edit/Hide Album.

If you find that there is still a problem or issue having regard to the above then it would be helpful if you could describe each step you are taking and post screenshots showing where you see the problem occurring.

Hope the above is of some assistance.

I understand all of that please see my previous post. I have no issue with knowing how to add or delete in either method. This issue is roon is having errors getting genres right. Let’s say I do everything that’s been stated here(already have several times). So now I have the albums I want after deleting what I don’t want. Then I want to add a new genre to the collection. Let’s go with r&b. Roon will add hundreds of albums from pretty much every genre. That’s the issue I am having.

Let’s leave a notification for @vova or @mike to see if they can check that the albums you are importing by selecting a genre in Collections is the correct list. It would be strange for it to be different between users.

I’m going to go through again and remove unwanted albums which will again take quiet a while(which is why this is so frustrating). Here’s another example. I focusi on pop/rock so get rid of that genre. It brings up albums from Chareles Mingus , Charlie Parker, Dianne reeves, Diana krall(the good old stuff like the girl in the other room) there’s hundreds of other examples. These clearly are not pop or rock albums. And when it add albums from genres I select like jazz, it gives me a bunch of stuff that’s anywhere from heavy metal to country to rock.

When did grateful dead and guns and roses produce jazz albums. When did Beyoncé produce a country album. This is the type of stuff I’m getting when I try to add genres to my collection or focus on a genre to remove.

Please. Instead of repeatedly tell me what I’m not doing, especially after explaining several times that I’ve done it the way you have laid out several times, please try to assist me with the issues I’m actually having. You are instead ignoring what my issues are and repeated telling me what I’m not doing. Also you are not listening. The main issue is roon making errors in genres. For example, when I go to collection setup on select jazz it imports hundreds of albums from many different genres. Like for example, guns and roses, U2, rolling stones and many many more. Also to add after looking deeper into individual albums. Some albums are listed under multiple genres. This may have something to do with what’s going on. Like a jazz album will be listed under jazz, but that same album will also be listed under rock, country, and others. So when I select jazz in collections and it adds guns and roses, guns and roses shows up under jazz and when I focus on rock it also shows up under rock. Now here’s the tricky part. If I go to collections again to and click the ticket icon next to the heart icon to show the genres I’ve added(like jazz for example). And then I highlight jazz, it will actually only show the jazz albums imported and not all the other stuff like guns and roses that it imported previous. So if I chose to delete those albums, guns and roses doesn’t show up. So it’s like in that senerio it accurately show albums in each genre when I select those to delete. But the problem is, when I chose to add a genre using collections, it won’t just import the genre I’ve added, it will add from multiple genres. So please stop telling me what I’m not doing after I’ve told you that I’ve done it the way you suggested several times and actually try to help solve the problem.

Oh, and yes I am focusing on the collections tag.